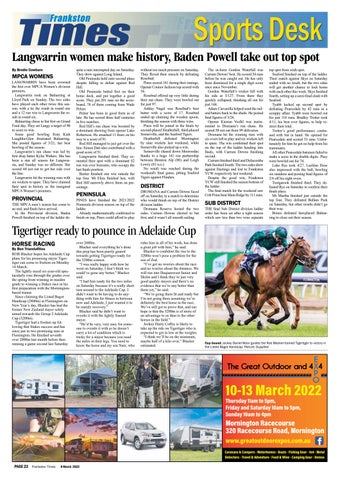 LANGWARRIN have been crowned the first ever MPCA Women’s division premiers. Langwarrin took on Balnarring at Lloyd Park on Sunday. The two sides have played each other twice this season, with a tie the result in round one and a 12 run win to Langwarrin the result in round six. Balnarring chose to bat first on Grand Final day. They set Langy a target of 90 to score to win. Some good bowling from Kiah Laughlin-Glen frustrated Balnarring. She posted figures of 3/21, her best bowling of the season. Langwarrin’s run chase was led by first drop batter Kylie Walters. She has been a star all season for Langwarrin, and Sunday was no different. She scored 44 not out to get her side over the line. Langwarrin hit the winning runs with six wickets to spare. They have claimed their spot in history as the inaugural MPCA Women’s premiers.

THE MPCA men’s season has come to an end, and finals have arrived. In the Provincial division, Baden Powell finished on top of the ladder de-

spite a rain interrupted day on Saturday. They drew against Long Island. Old Peninsula held onto second place despite falling to defeat against Red Hill. Old Peninsula batted first on their home deck, and put together a good score. They put 201 runs on the scoreboard, 78 of them coming from Wade Pelzer. Pelzer has been in good form as of late. He has scored three half centuries in five matches. Red Hill’s run chase was boosted by a dominant showing from opener Luke Robertson. He smashed 11 fours on his way to a score of 91. Red Hill managed to just get over the line. Simon Dart also contributed with a good score of 51. Langwarrin finished third. They cemented their spot with a dominant 82 run win over Sorrento, who occupy the last finals position. Baxter finished one win outside the top four. Mt Eliza finished last, with Red Hill narrowly above them on percentage.

PINES have finished the 2021/2022 Peninsula division season on top of the ladder. Already mathematically confirmed to finish on top, Pines could afford to play

without too much pressure on Saturday. They flexed their muscle by defeating Rosebud. Pines scored 161 during their innings. Opener Connor Jackson top scored with 54. Rosebud offered up very little during their run chase. They were bowled out for just 97. Ashley Nagel was Rosebud’s best batter with a score of 17. Rosebud ended up claiming the wooden spoon, finishing the season with three wins. Pines will be joined in the finals by second-placed Heatherhill, third-placed Somerville, and the Seaford Tigers. Heatherhill defeated Mornington by nine wickets last weekend, while Somerville also picked up a win. Somerville chased down Moorooduc thanks to a huge 141 run partnership between Brenton Alp (88) and Leigh Lowry (81 n.o.). No result was reached during the weekend&#39;s final game, pitting Seaford Tigers against Flinders.

DROMANA and Carrum Downs faced off on Saturday in a match to determine who would finish on top of the District division ladder. Dromana Reserve hosted the two sides. Carrum Downs elected to bat first, and it wasn’t all smooth sailing.

The in-form Gordon Waterfall was Carrum Downs’ best. He scored 54 runs before he was caught out. He has only been dismissed for a single digit score once since November. Gordon Waterfall’s wicket fell with his side at 3/127. From there they quickly collapsed, finishing all out for just 144. Adam Ciavarella helped send the tailend batters back to the sheds. He posted final figures of 3/26. Opener Kierran Voelkl was instrumental to Dromana’s run chase. He scored 58 not out from 99 deliveries. Dromana hit the winning runs with six overs left to play and six wickets left to spare. The win confirmed their spot on the top of the ladder heading into finals, with Carrum Downs finishing second. Carrum finished third and Delacombe Park finished fourth. The two sides drew against Hastings and lost to Frankston YCW respectively last weekend. Despite the good win, Frankston YCW still finished the season bottom of the ladder. The final match for the weekend saw Crib Point beat Main Ridge by 111 runs.

top spot from sixth spot. Seaford finished on top of the ladder. Their match against Skye on Saturday ended with no result, but the two sides will get another chance to lock horns with each other this week. Skye finished fourth, setting up a semi-final clash with Seaford. Tyabb locked up second spot by defeating Pearcedale by 42 runs in a scrappy affair. Tyabb were bowled out for just 116 runs. Bradley Trotter took 4/11, his best ever figures, to help restrict their total. Trotter’s good performance continued with bat in hand. He opened for Pearcedale and scored 33 runs. Unfortunately for him he got no help from his teammates. All other Pearcedale batsmen failed to make a score in the double digits. They were bowled out for 74. Luke Rus took 4/27. Lachlan Hose also impressed with the ball, bowling six maidens and posting final figures of 2/6 off his eight overs. Tootgarook finished third. They defeated Rye on Saturday to confirm their finals place. Mt Martha finished just outside the top four. They defeated Ballam Park on Saturday, but other results didn’t go their way. Boneo defeated last-placed Balnarring to close out their season.

By Ben Triandafillou ROB Blacker hopes his Adelaide Cup plans for his promising stayer Tigertiger can come to fruition on Monday 14 March. The lightly raced six-year-old spectacularly rose through the grades over the spring from winning in maiden grade to winning a Stakes race in his first preparation with the Morningtonbased trainer. Since claiming the Listed Bagot Handicap (2800m) at Flemington on New Year’s day, Blacker has had the former New Zealand stayer solely aimed towards the Group 2 Adelaide Cup (3200m). Tigertiger had a freshen up following that Stakes success and has since put in two promising runs at Flemington. He finished seventh over 2000m last month before then running a game second last Saturday

over 2600m. Blacker said everything he’s done this prep has been purely geared towards getting Tigertiger ready for the 3200m contest. “I was really happy with how he went on Saturday, I don’t think we could’ve gone any better,” Blacker said. “I had him ready for the two miles on Saturday because it’s a really short turn around to the Adelaide Cup. I didn’t want to be having to do anything with him for fitness in between now and Adelaide, I just wanted it to be mainly recovery.” Blacker said he didn’t want to overdo it with the lightly framed stayer. “He’d be very, very easy for someone to overdo it with as he doesn’t carry a lot of condition which is tricky for a stayer because you need the miles in their legs. You need to know the horse and my son Natz, who

rides him in all of his work, has done a great job with him,” he said. Blacker is confident the rise to the 3200m won’t pose a problem for the son of Zed. “I’ve got no worries about the race and no worries about the distance. We will run into Daqiansweet Junior and Skelm and I think they’re just very good quality stayers and there’s no evidence that we’re any better than them yet,” he said. “We’re going there fit and ready but I’m not going there assuming we’re definitely the best horse in the race. We’ve still got to prove that, and our hope is that the 3200m is of more of an advantage to us than to the other horses in the field.” Jockey Harry Coffey is likely to take up the ride on Tigertiger who is expected to get in low at the weights. “I think we’ll be on the minimum, maybe half of a kilo over,” Blacker estimated.