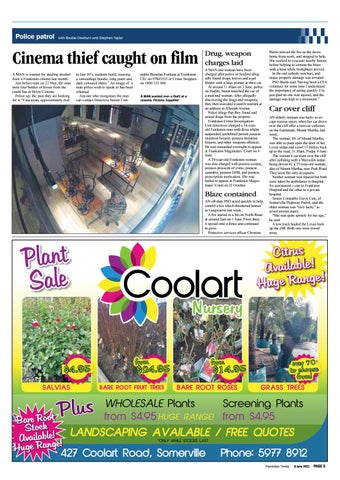 Cinema thief caught on film A MAN is wanted for stealing alcohol from a Frankston cinema last month. Just before 6am on 22 May, the man stole four bottles of booze from the candy bar at Hoyts Cinema. Police say the man they are looking for is “Caucasian, approximately mid

to late 30’s, medium build, wearing a camouflage hoodie, long pants and dark coloured shoes.” An image of a man police wish to speak to has been released. Anyone who recognises the man can contact Detective Senior Con-

Drug, weapon charges laid A MAN and woman have been charged after police in Seaford allegedly found drugs, knives and a gel blaster with a laser pointer in their car. At around 11.40am on 3 June, police on Hadley Street searched the car of a man and woman. After allegedly discovering the drugs and weapons, they then executed a search warrant at an address in Allawah Avenue. Police allege that they found and seized drugs from the property. Frankston Crime Investigation Unit detectives charged a 34-yearold Frankston man with drive whilst suspended, prohibited person possess imitation firearm, possess imitation firearm, and other weapons offences. He was remanded overnight to appear at Frankston Magistrates’ Court on 4 June. A 29-year-old Frankston woman was also charged with possess ecstasy, possess proceeds of crime, possess cannabis, possess GHB, and possess prescription medication. She was bailed to appear at Frankston Magistrates’ Court on 22 October.

Blaze contained AN off-duty PSO acted quickly to help control a fire which threatened homes in Langwarrin last week. A fire started in a bin on North Road at around 2am on 1 June. From there it spread onto a fence and continued to grow. Protective services officer Christine

Burns noticed the fire as she drove home from work, and stopped to help. She worked to evacuate nearby homes before helping to contain the blaze with a hose while firefighters arrived. In the end nobody was hurt, and major property damage was avoided. PSO Burns said “having been a CFA volunteer for some time I understood the importance of acting quickly. I’m just glad no one was injured, and the damage was kept to a minimum.”

Car over cliff AN elderly woman was lucky to escape serious injury when her car drove over the cliff after a two-car collision on the Esplanade, Mount Martha, last week. The woman, 89, of Mount Martha, was able to push open the door of her Lexus sedan and crawl 15 metres back up to the road, 11.30am, Friday 4 June. The woman’s car went over the cliff after colliding with a Mercedes sedan being driven by a 77-year-old woman, also of Mount Martha, near Park Road. They were the only occupants. Neither woman was injured but both were taken by ambulance to hospital for assessment – one to Frankston Hospital and the other to a private hospital. Senior Constable Travis Cute, of Somerville Highway Patrol, said the older woman was “very lucky” to avoid serious injury. “She was quite spritely for her age,” he said. A tow truck hauled the Lexus back up the cliff. Both cars were towed away.