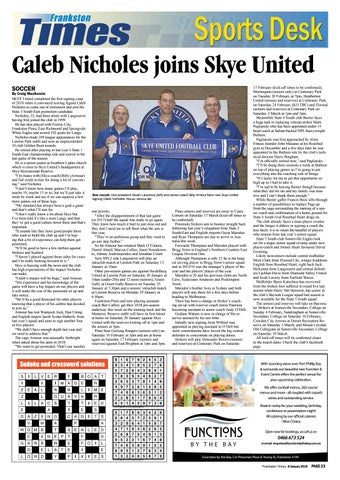 By Craig MacKenzie SKYE United completed the first signing coup of 2018 when it convinced scoring legend Caleb Nicholes to come out of retirement and join the State 3 South-East promotion candidate. Nicholes, 35, had three stints with Langwarrin having first joined the club in 1999. He has also played with Fitzroy City, Frankston Pines, East Richmond and Springvale White Eagles and scored 192 goals for Langy. Nicholes made 249 league appearances for the Lawton Park outfit and won an unprecedented 10 club Golden Boot awards. He retired after playing in last year’s State 1 South-East championship side and scored in the last game of the season. He is a senior pastor at Southern Lights church which is close to Skye United’s headquarters at Skye Recreational Reserve. “I’m mates with (Skye coach) Billy (Armour) and full credit to him for doing a lot of convincing,” said Nicholes. “I don’t know how many games I’ll play, maybe 10, maybe 15 or so, but we’ll just take it week by week and see if we can squeeze a few more games out of these legs. “My standard has always been a goal a game and that’s what I’ll aim for. “I don’t really know a lot about Skye but I’ve been told it’s like a mini Langy and that they’ve got a good culture down there and that’s important. “It sounds like they have good people there who want to build the club up and I’m hoping that a bit of experience can help them get promoted. “It’ll be good to have a few derbies against Strikers and Seaford. “I haven’t played against those sides for years and I’m really looking forward to it.” Skye is buzzing with the news and the club has high expectations of the impact Nicholes can make. “Caleb’s impact will be huge,” said Armour. “His experience and his knowledge of the game will have a big impact on our players and it will make the rest of the peninsula sit up and take notice. “He’ll be a good drawcard for other players knowing that a player of his calibre has decided to join us.” Armour has lost Wumjock Jock, Dan Utting and English import Jacob Scotte-Hatherly from last year’s squad and aims to sign another four or five players. “We didn’t have enough depth last year and we need to address that.” The cagy Armour was unusually forthright when asked about his aims in 2018. “We want to get promoted. That’s our number

one priority. “After the disappointment of that last game (in 2017) half the squad was ready to go again. They knew how much it hurt to just miss out and they don’t need me to tell them what the aim is this year. “They’re an ambitious group and they want to go one step further.” So far Armour has retained Mark O’Connor, Daniel Attard, Marcus Collier, Jason Nowakowski, Johnny Andrinopoulos and Jonathan Crook. New NPL2 side Langwarrin will play an intraclub match at Lawton Park on Saturday 13 January at 10am. Other pre-season games are against Heidelberg United at Lawton Park on Saturday 20 January at 10am (under-20s) and 12 noon (seniors), Green Gully at Green Gully Reserve on Tuesday 23 January at 7.30pm and a seniors’ intraclub match at Lawton Reserve on Monday 29 January at 6.30pm. Frankston Pines and new playing assistant coach Ben Caffrey get their 2018 pre-season underway this week on the training track and the Monterey Reserve outfit will have its first hitout at home on Saturday 20 January against Skye United with the reserves kicking off at 1pm and the seniors at 3pm. Pines host Geelong Rangers (seniors only) on Saturday 10 February at 3pm and are at home again on Saturday 17 February (seniors and reserves) against East Brighton at 1pm and 3pm.

Pines seniors and reserves are away to Casey Comets on Saturday 17 March (kick-off times to be confirmed). Peninsula Strikers aim to bounce straight back following last year’s relegation from State 2 South-East and English imports Oscar Marsden and Ryan Thompson are due to arrive in Australia this week. Forwards Thompson and Marsden played with Brigg Town in England’s Northern Counties East League Division One. Although Thompson is only 21 he is the longest serving player in Brigg Town’s senior squad and in 2015/16 was the manager’s player of the year and the players’ player of the year. Marsden is 20 and his previous clubs are North Cave, Sculcoates Amateurs and Pocklington Town. Marsden’s brother lives in Sydney and both players will stay there for a few days before heading to Melbourne. There has been a change in Striker’s coaching set-up with reserves coach Jamie Paterson becoming assistant to senior coach Andy O’Dell. Graham Watson is now in charge of the reserves assisted by his son John. Initially new signing Aron Wilford was appointed as playing assistant to O’Dell but work commitments have forced the big central defender to concentrate on playing duties. Strikers will play Doncaster Rovers (seniors and reserves) at Centenary Park on Saturday

17 February (kick-off times to be confirmed), Mornington (seniors only) at Centenary Park on Tuesday 20 February at 7pm, Heatherton United (seniors and reserves) at Centenary Park on Saturday 24 February (KO TBC) and Elwood (seniors and reserves) at Centenary Park on Saturday 3 March at 1pm and 3pm. Meanwhile State 4 South club Baxter faces a huge task in replacing veteran striker Mark Pagliarulo who has been appointed under-15 head coach at Italian-backed NPL heavyweight Bulleen. Pagliarulo was first approached by Alien Fitness founder John Maisano at his Rosebud gym in December and a few days later he was appointed to the Bulleen role by the club’s technical director Harry Bingham. “I’m officially retired now,” said Pagliarulo. “I’ll be doing three sessions a week at Bulleen on top of playing games so I’m going to put everything into the coaching side of things. “It’s lucky for me to get this opportunity so high up so I had to take it. “I’m sad to be leaving Baxter though because what they did for me and my family was massive and I can’t thank them enough.” While Baxter gaffer Francis Beck sifts through a number of possibilities to replace Pags up front the saga surrounding the naming of a senior coach and confirmation of a home ground for State 4 South rival Rosebud Heart drags on. The club already faces a mass player exodus and the longer it dithers in signing a coach the less likely it is to retain the handful of players who remain from last year’s senior squad. State 5 South club Somerville Eagles look set for a major senior squad revamp under new player-coach and former Heart favourite David Greening. Likely newcomers include central midfielder Mick Clark from Elwood City, winger Kaddison English from Rosebud Heart, right back Jack McKenna from Langwarrin and central defenders Lachlan Davie from Diamond Valley United and Scott Laverty from Surfside Waves. Midfielder Bjorn Kutschera has recovered from the broken foot suffered in round five last season while Harry Van Staveren, top scorer in the club’s Bayside League squad last season is now available for the State 5 South squad. The seniors and reserves will take on Bayswater Strikers at Somerville Secondary College on Sunday 4 February, Sandringham at Somerville Secondary College on Saturday 10 February, Croydon City Arrows at Dorset Recreation Reserve on Saturday 3 March, and Mount Lilydale Old Collegians at Somerville Secondary College on Saturday 10 March. All kick-off times will be confirmed closer to the match dates. Check the club’s facebook page.