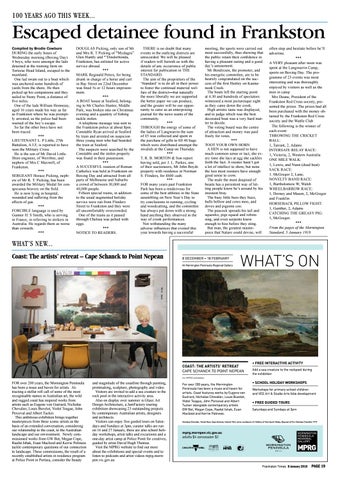 Escaped detainee found in Frankston Compiled by Brodie Cowburn DURING the early hours of Wednesday morning (Boxing Day) 4 boys, who were amongst the lads detained at the training farm on Tortoise Head Island, escaped to the mainland. One lad swam out to a boat which was anchored some hundreds of yards from the shore. He then picked up his companions and they sailed to Stony Point, a distance of five miles. One of the lads William Hennessy, aged 16 years made his way as far as Frankston where he was promptly arrested, as the police had been warned of the boy’s escape. So far the other boys have not been traced. *** LIEUTENANT L. P Little, 27th Battalion, A.I.F, is reported to have won the Military Cross. He is the son of Mr David Little. Shire engineer, of Werribee, and nephew of Mrs C Maxwell, of Frankston. *** SERGEANT Horace Picking, nephew of Mr R. T. Picking, has been awarded the Military Medal for conspicuous bravery on the field. He is now lying in hospital, wounded and suffering from the effects of gas. *** FORCIBLE language is used by Gunner H. S Smith, who is serving in France, in referring to strikers in Australia. He regards them as worse than cowards. ***

DOUGLAS Picking, only son of Mr and Mrs R. T Picking of “Mydugra” Glen Huntly and “’Dindorbonda, Frankston, has enlisted for active service abroad. *** MARK Reginald Peters, for being drunk in charge of a horse and cart in Bay Street on 22nd December was fined 5s or 12 hours imprisonment. *** A BOAT house at Seaford, belonging to Mr Charles Hunter, Middle Park, was broken into on Christmas evening and a quantity of fishing tackle stolen. A telephone message was sent to the Frankston police at about 8pm. Constable Ryan arrived at Seaford by train and arrested on suspicion three young men who had boarded the train at Seaford. The suspects were searched by the Constable and the stolen property was found in their possession. *** A SUCCESFUL reunion of Roman Catholics was held at Frankston on Boxing Day and attracted from all parts of Melbourne and Suburbs a crowd of between 30,000 and 40,000 people. Fifteen special trains, in addition to the usual augmented holiday service were run from Flinders Street to Frankston and they were all uncomfortably overcrowded. One of the trains as it passed through Chelsea was pelted with eggs. *** NOTICE TO READERS.

THERE is no doubt that many events in the outlying districts are unrecorded. We will be pleased if readers will furnish us with the details of any occurrence of public interest for publication in THE STANDARD. The aim of the proprietors of the ‘Standard’ is to do all in their power to foster the continual material welfare of the district—but naturally the more liberally we are supported the better paper we can produce, and the greater will be our opportunity to cater as an enterprising journal for the news wants of the community. *** THROUGH the energy of some of the ladies of Langwarrin the sum of £5 was collected and spent in the purchase of gifts to fill 40 bags which were distributed amongst the invalids at the Camp on Thursday. *** T. R. B. MORTON &amp; Son report having sold, per J. L. Parkes, one of their auctioneers, Mr John Boyds property with residence in Norman S. Flinders, for £600 cash. *** FOR many years past Frankston Park has been a rendezvous for some of the best athletes in the State assembling on New Year’s Day to try conclusions in running, cycling and woodcutting, and the committee has always put down with a strong hand anything they observed in the way of crook performances. Not withstanding the many adverse influences that existed this year towards having a successful

meeting, the sports were carried out most successfully, thus showing that the public retain their confidence in having a pleasant outing and a good day’s amusement. Mr Bendixsen, the promoter, and his energetic committee, are to be heartily congratulated on the success of the first Henley on Kannanook Creek. The boats left the starting point at 4.30 and hundreds of spectators witnessed a most picturesque sight as they came down the creek. High artistic taste was displayed, and to judge which was the best decorated boat was a very hard matter to decide. The voting board was the centre of attraction and money was paid freely for votes. *** TOOT YOUR OWN HORN A HEN is not supposed to have much common sense or tact, she every time she lays at egg she cackles forth the fact. A rooster hasn’t got a lot of intellect to show, but none the less most roosters have enough good sense to crow. The mule the most despised of beasts has a persistent way of letting people know he’s around by his insistent bray. The busy little bees they buzz, bulls bellow and cows moo, and doves and pigeons coo. The peacock spreads his tail and squawks; pigs squeal and robins sing, and even serpents know enough to hiss before they sting. But man, the greatest masterpiece that Nature could devise, will

often stop and hesitate before he’ll advertise. *** A VERY pleasant after noon was spent at the Langwarrin Camp, sports on Boxing Day. The programme of 23 events was most interesting and was thoroughly enjoyed by visitors as well as the men in camp Mrs Deane, President of the Frankston Red Cross society, presented the prizes. The prizes had all been purchased with the money obtained by the Frankston Red Cross society and the Wattle Club The following is the winner of each event: THROWING THE CRICKET BALL: 1, Tarrant, 2, Adams INTERSATE RELAY RACE: 1, Victoria, 2, Western Australia ONE MILE WALK: 1, Lewis, and Nunn (dead heat) SACK RACE: 1. McGregor 2, Lane; NOVELTY BAND RACE: 1, Bartholomew W, Walsh WHEELBARROW RACE: 1, Dorney and Mason, 2, McGregor and Franklin HORSEBACK PILLOW FIGHT: 1, Gunther, 2, Adams CATCHING THE GREASY PIG: 1, McGregor. *** From the pages of the Mornington Standard, 5 January 1918

FOR over 200 years, the Mornington Peninsula has been a muse and haven for artists. Attracting a stellar roll call of some of the most recognisable names in Australian art, the wild and rugged coast has inspired works from artists such as Eugene von Guérard, Nicholas Chevalier, Louis Buvelot, Violet Teague, John Perceval and Albert Tucker. This ambitious exhibition brings together masterpieces from these iconic artists as the basis of an extended conversation, considering our relationship to the coast, to the Australian landscape and our environment. Newly commissioned works from GW Bot, Megan Cope, Raafat Ishak, Euan Macleod and Kerrie Poliness tackle contemporary questions of our connection to landscape. These commissions, the result of a recently established artists in residence program at Police Point in Portsea, consider the beauty

and magnitude of the coastline through painting, printmaking, sculpture, photography and video. Visitors are invited to add a sea creature to the rock pool in the interactive activity area. Also on display over summer is Glass: Art Design Architecture, a JamFactory touring exhibition showcasing 23 outstanding projects by contemporary Australian artists, designers and architects. Visitors can enjoy free guided tours on Saturdays and Sundays at 3pm, curator talks are run on 16 and 27 January, there are also school holiday workshops, artist talks and excursions and a one-day artist camp at Police Point for creatives, guided by artist David Hugh Thomas. Visit the MPRG website to find out more about the exhibitions and special events and to listen to podcasts and artist videos mprg.mornpen.vic.gov.au