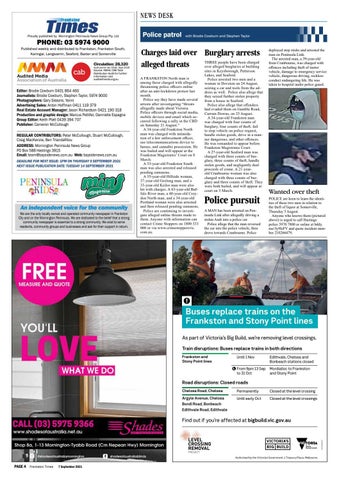 Charges laid over Burglary arrests THREE people have been charged alleged threats over alleged burglaries at building A FRANKSTON North man is among those charged with allegedly threatening police officers online after an anti-lockdown protest last month. Police say they have made several arrests after investigating “threats allegedly made about Victoria Police officers through social media, mobile devices and email which occurred following a rally in the CBD on Saturday 21 August.” A 34-year-old Frankston North man was charged with intimidation of a law enforcement officer, use telecommunications device to harass, and cannabis possession. He was bailed and will appear at the Frankston Magistrates’ Court on 8 March. A 33-year-old Frankston South man was also arrested and released pending summons. A 35-year-old Hillside woman, 37-year-old Geelong man, and a 33-year-old Keilor man were also hit with charges. A 63-year-old Buffalo River man, a 40-year-old Croydon North man, and a 34-year-old Portland woman were also arrested and then released pending summons. Police are continuing to investigate alleged online threats made to them. Anyone with information can contact Crime Stoppers on 1800 333 000 or via www.crimestoppersvic. com.au.

Police pursuit A MAN has been arrested on Peninsula Link after allegedly driving a stolen Audi into a police car. Police allege that the man reversed the car into the police vehicle, then drove towards Cranbourne. Police

deployed stop sticks and arrested the man on Peninsula Link. The arrested man, a 39-year-old from Cranbourne, was charged with offences including theft of motor vehicle, damage to emergency service vehicle, dangerous driving, reckless conduct endangering life. He was taken to hospital under police guard.

Wanted over theft POLICE are keen to learn the identities of these two men in relation to the theft of liquor at Somerville, Thursday 5 August. Anyone who knows them (pictured above) is urged to call Hastings police 5970 7800 or online at bddy. me/3y9IsFV and quote incident number 210266479.

Mordialloc to Frankston and Stony Point

Closed at the level crossing

Closed at the level crossings

Find out if you’re affected at bigbuild.vic.gov.au