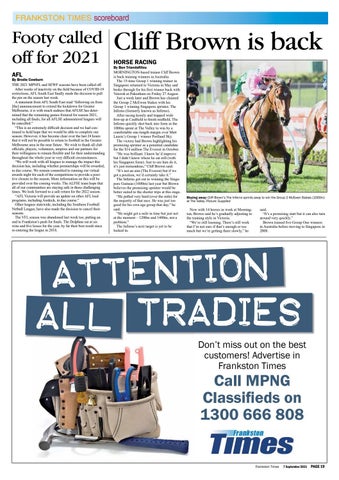 By Brodie Cowburn THE 2021 MPNFL and SEWF seasons have been called off. After weeks of inactivity on the field because of COVID-19 restrictions, AFL South East finally made the decision to pull the pin on the season last week. A statement from AFL South East read “following on from [the] announcement to extend the lockdown for Greater Melbourne, it is with much sadness that AFLSE has determined that the remaining games fixtured for season 2021, including all finals, for all AFLSE administered leagues will be cancelled.” “This is an extremely difficult decision and we had continued to hold hope that we would be able to complete our season. However, it has become clear over the last 24 hours that it will not be possible to return to football in the Greater Melbourne area in the near future. We wish to thank all club officials, players, volunteers, umpires and our partners for their willingness to remain flexible and for their understanding throughout the whole year in very difficult circumstances. “We will work with all leagues to manage the impact this decision has, including whether premierships will be awarded, in due course. We remain committed to running our virtual awards night for each of the competitions to provide a positive closure to the season. More information on this will be provided over the coming weeks. The ALFSE team hope that all of our communities are staying safe in these challenging times. We look forward to a safe return for the 2022 season. “AFL Victoria will provide an update on other AFL lead programs, including Auskick, in due course.” Other leagues statewide, including the Southern Football Netball League, have also made the decision to cancel their seasons. The VFL season was abandoned last week too, putting an end to Frankston’s push for finals. The Dolphins sat at six wins and five losses for the year, by far their best result since re-entering the league in 2018.

Cliff Brown is back HORSE RACING

By Ben Triandafillou MORNINGTON-based trainer Cliff Brown is back training winners in Australia. The 15-time Group 1 winning trainer in Singapore returned to Victoria in May and broke through for his first winner back with Veterok at Pakenham on Friday 27 August. Just a week later and Brown has claimed the Group 2 McEwen Stakes with his Group 1 winning Singapore sprinter, The Inferno (formerly known as Inferno). After racing keenly and trapped wide first-up at Caulfield to finish midfield, The Inferno quickly shot back into form in the 1000m sprint at The Valley to win by a comfortable one-length margin over Matt Laurie’s Group 1 winner Portland Sky. The victory had Brown highlighting his promising sprinter as a potential candidate for the $14 million The Everest in October. “He was brilliant. I knew he’d improve but I didn’t know where he sat still (with his Singapore form). Just to see him do it, it’s just tremendous,” Cliff Brown said. “It’s not an aim (The Everest) but if we got a position, we’d certainly take it.” The Inferno got out to winning the Singapore Guineas (1600m) last year but Brown believes the promising sprinter would be better suited to the shorter trips at this stage. “He pulled very hard (over the mile) for the majority of that race. He was just too good for his own age group that day,” he said. “He might get a mile in time but just not at the moment – 1200m and 1400m, not a problem.” The Inferno’s next target is yet to be locked in.

Blazing away: Cliff Brown’s The Inferno sprints away to win the Group 2 McEwen Stakes (1000m) at The Valley. Picture: Supplied

Now with 14 horses in work at Mornington, Brown said he’s gradually adjusting to the training style in Victoria. “We’re still learning. There’s still work that I’m not sure if that’s enough or too much but we’re getting there slowly,” he

said. “It’s a promising start but it can also turn around very quickly.” Brown trained five Group One winners in Australia before moving to Singapore in 2008.

Don’t miss out on the best customers! Advertise in Frankston Times