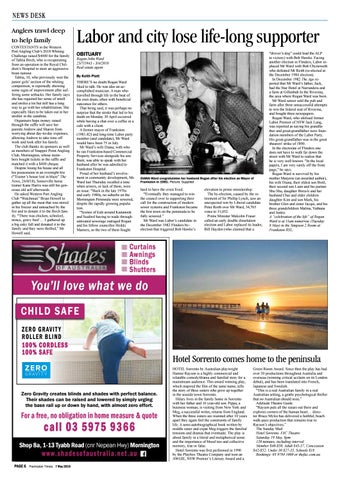 NEWS DESK Anglers trawl deep to help family CONTESTANTS in the Western Port Angling Club’s 2018 Whiting Challenge raised $4600 for the family of Tahlia Birch, who is recuperating from an operation in the Royal Children’s Hospital to stem an aggressive brain tumour. Tahlia, 10, who previously won the junior girls’ section of the whiting competition, is reportedly showing some signs of improvement after suffering some setbacks. Her family says she has regained her sense of smell and smiles a lot but still has a long way to go with her rehabilitation. She especially likes to be taken out in her stroller in the sunshine. Organisers hope money raised through the raffle will save her parents Andrew and Sharon from worrying about day-to-day expenses, allowing Andrew to take time off work and look after his family. The club thanks its sponsors as well as members of Snapper Point Angling Club, Mornington, whose members bought tickets in the raffle and matched it with a $400 cheque. Despite losing his house and all his possessions in an overnight fire (“Trainer’s house lost in blaze” The News, 24/4/18), Somerville horse trainer Kane Harris was still his generous old self afterwards. He asked Western Port Angling Club “Watchman” Brian Howell to gather up all theTMmeat that was stored ZeroGravity in his freezer and untouched by the 100% fire cordless, and to donate100% it to thesafe Birch family. “There was chicken, schnitzel, mince, gravy beef … I gathered up a big esky full and donated it to the Chain Operation family and they were thrilled,” Mr If youHowell cannot said. avoid installing

Rogan John Ward 25/7/1943 - 3/4/2018 Real estate agent By Keith Platt THERE’S no doubt Rogan Ward liked to talk. He was also an accomplished musician. A man who travelled through life to the beat of his own drum, often with beneficial outcomes for others. That being said, it was perhaps no surprise that the stroke that led to his death on Monday 30 April occurred while having a chat over a coffee in a cafe with a client. A former mayor of Frankston (1981-82) and long-time Labor party member (and candidate), Mr Ward would have been 75 in July. Mr Ward’s wife Diana, with who he ran Frankston-based Commercial Property Services alongside his son Brett, was able to speak with her husband after he was admitted to Frankston Hospital. Proud of her husband’s involvement in community development, Ms Ward last Thursday recalled a time when sewers, or lack of them, were an issue: “Back in the late 1970s and early 1980s, no suburbs on the Mornington Peninsula were sewered, despite the rapidly growing population. “Scenes of kids around Kananook and Seaford having to wade through untreated sewerage outraged Rogan and his fellow councillor Heikki Mamers, so the two of them fought

shades that use chains, then the addition of (patent pending) ZeroGravityTM technology transforms the shade into something very different. It’s perfectly balanced, and can be raised and lowered with almost zero effort- no matter how big the shade.

DIANA Ward congratulates her husband Rogan after his election as Mayor of Frankston in 1981. Picture: Supplied

hard to have the crisis fixed. “Eventually they managed to win the council over to supporting their call for the construction of modern sewer systems and Frankston became the first town on the peninsula to be fully sewered.” Mr Ward was Labor’s candidate in the December 1982 Flinders byelection that triggered Bob Hawke’s

elevation to prime ministership. The by-election, caused by the retirement of Sir Phillip Lynch, saw an unexpected win by Liberal candidate Peter Reith over Mr Ward, 34,765 votes to 31,052. Prime Minister Malcolm Fraser called an early double dissolution election and Labor replaced its leader, Bill Hayden (who claimed that a

“drover’s dog” could lead the ALP to victory) with Bob Hawke. Facing another election in Flinders, Labor replaced Mr Ward with Bob Chynoweth who defeated Mr Reith (re-elected at the December 1984 election). In December 1982 The Age reported that Mr Ward’s father, Jack, had the Star Hotel at Narrandera and a farm at Gillenbah In the Riverina, the area where Rogan Ward was born. Mr Ward senior sold the pub and farm after three unsuccessful attempts to win the federal seat of Riverina, and bought three newspapers. Rogan Ward, who idolised former Labor Premier of NSW Jack Lang, was reported as saying his grandfather and great-grandfather were foundation members of the Labor Party. His great-grandfather was in the great shearers' strike of 1890. In the electorate of Flinders one does not have to walk far down the street with Mr Ward to realise that he is very well known. "In the local papers, I am very rarely off the front page," he says. Rogan Ward is survived by his mother Marjorie (an awarded author), his wife Diana, their eldest son Brett, their second son Liam and his partner Shu Shu, daughter Birra-li and her husband Chai and older children daughter Kim and son Mark, his brother Glen and sister Jacqui, and his three grandchildren Malina, Yuthana and Jantra. A “celebration of the life” of Rogan Ward is at 11am tomorrow (Tuesday 8 May) in the Simpson 2 Room at Frankston RSL.

If it’s motorised blinds you want, the ZeroGravityTM technology can be easily motorised. Using spring technology that has been perfectly balanced, a small capacity DC motor can lift a blind of almost any size. Batteries will last over 10 times longer (as tested by Blindware) since the motor is doing almost no work to lift the blind when used in conjunction with ZeroGravityTM technology.

Zero Gravity creates blinds and shades with perfect balance. Their shades can be raised and lowered by simply urging the base rail up or down by hand, with almost zero effort.

For a free, no obligation in home measure & quote

HOTEL Sorrento by Australian playwright Hannie Rayson is a highly commercial and relatable comedy/drama and familial story for a mainstream audience. This award winning play, which inspired the film of the same name, tells the story of three sisters who grew up together in the seaside town Sorrento. Hilary lives in the family home in Sorrento with her father and 16 year-old son. Pippa, a business woman, is visiting from New York and Meg, a successful writer, returns from England. When the three sisters are reunited after 10 years apart they again feel the constraints of family life. A semi-autobiographical book written by middle sister and expat Meg triggers the familial tensions and dramas that eventuate. The play is about family in a literal and metaphorical sense and the importance of blood ties and collective memory, true or false. Hotel Sorrento was first performed in 1990 by the Playbox Theatre Company and won an AWGIE, NSW Premier’s Literary Award and a

Green Room Award. Since then the play has had over 50 productions throughout Australia and overseas (winning critical acclaim on its London debut), and has been translated into French, Japanese and Swedish. “This is a real Australian family in a real Australian setting, a gentle psychological thriller that no Australian should miss.” Adelaide Theatre Guide “Rayson puts all the issues out there and explores corners of the human heart… director Bruce Myles has delivered a faithful, beach walk-pace production that remains true to Rayson’s objectives.” The Sunday Mail Hotel Sorrento. FAC Theatre Saturday 19 May, 8pm 120 minutes, including interval Member $40-$50, Adult $45-57, Concession $42-$52, Under 30 $27-35, Schools $18 Bookings: 03 9784 1060 or thefac.com.au