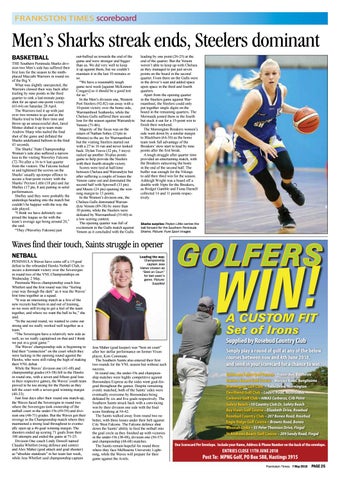 THE Southern Peninsula Sharks division two Men’s side has suffered their first loss for the season to the ninthplaced Maccabi Warriors in round six of the Big V. What was slightly unexpected, the Warriors clawed their way back after trailing by nine points in the third quarter to sink a last-minute jumpshot for an upset one-point victory (65-64) on Saturday 28 April. The Warriors tied it up with just over two minutes to go and as the Sharks tried to bide their time and throw up an unsuccessful shot, Jared Mintez dished it up to team mate Andrew Sharp who nailed the final shot of the game and deflated the Sharks undefeated balloon in the final 45 seconds. The Sharks’ State Championship Women’s side also suffered a narrow loss to the visiting Waverley Falcons (72-76) after a 16 to 6 last quarter from the visitors. The Falcons locked in and tightened the screws on the Sharks’ usually up-tempo offence to secure a four-point victory with the Sharks’ Peyton Little (18 pts) and Jaz Shelley (17 pts, 8 ast) putting in solid performances. Shelley said they were probably the underdogs heading into the match but couldn’t be happier with the way the side played. “I think we have definitely surprised the league so far with the team’s average age being around 20,” she said. “They (Waverley Falcons) just

out-bullied us towards the end of the game and were stronger and bigger than us. We did very well to keep it up against them, but we couldn’t maintain it in the last 10 minutes or so. “We have a reasonably tough game next week [against McKinnon Cougars] so it should be a good test for us.” In the Men’s division one, Western Port Steelers (92-82) ran away with a 10-point victory over the home side, Warrnambool Seahawks, while the Chelsea Gulls suffered their second loss for the season against Warrandyte Venom (71-86). Majority of the focus was on the return of Nathan Sobey (21pts in 40mins) to the arc for Warrnambool but the visiting Steelers started out with a 27 to 16 run and never looked back. Dylan Travis (32 pts, 5 treys) racked up another 30-plus points game to help provide the Steelers with their fourth straight victory. Scores were tied at half-time between Chelsea and Warrandyte but after suffering a couple of losses the Venom came out and dominated the second half with Sprewell (33 pts) and Moore (24 pts) opening the winning margin to 15 points. In the Women’s division one, the Chelsea Gulls dominated Warrandyte Venom (89-58) by more than 30 points, while the Steelers were defeated by Warrnambool (55-40) in a low scoring contest. The opening quarter was full of excitement in the Gulls match against Venom as it concluded with the Gulls

leading by one point (26-25) at the end of the quarter. But the Venom weren’t able to keep up with Chelsea as they managed to put just seven points on the board in the second quarter. From there on the Gulls were in the driver’s seat and added space upon space in the third and fourth quarters. Apart from the opening quarter in the Steelers game against Warrnambool, the Steelers could only put together single digits on the board in the remaining quarters. The Mermaids joined them in the fourth but stuck it out for a 15-point win to finish their weekend. The Mornington Breakers women’s side went down by a similar margin to Blackburn (64-50) as the home team took full advantage of the Breakers’ slow start to lead by nine points after the first break. A tough struggle after quarter time provided an entertaining match, with the Breakers outscoring the hosts in the end of the second half. The buffer was enough for the Vikings to add their third win for the season. Ashleigh Wright was a board off a double with 16pts for the Breakers, as Bridget Gamble and Fiona Darnell collected 14 and 11 points respectively.

PENINSULA Waves have come off a 15-goal defeat to the rebranded Hawks Netball Club, to secure a dominant victory over the Sovereigns in round two of the VNL Championships on Wednesday 2 May. Peninsula Waves championship coach Jess Whitfort said the first round was like “feeling your way through the dark” as it was the Waves’ first time together as a squad. “It was an interesting match as a few of the new recruits had been in and out of training, so we were still trying to get a feel of the team together, and where we want the ball to be,” she said. “In the second round, we wanted to come out strong and we really worked well together as a team.” “The Sovereigns have a relatively new side as well, so we really capitalised on that and I think we put in a great game.” The Waves’ championship side is beginning to find their “connection” on the court which they were lacking in the opening round against the Hawks, who were still riding the high of making their VNL debut. While the Waves’ division one (41-48) and championship grades (43-58) fell to the Hawks in round one, with a seven and fifteen goal loss in their respective games, the Waves’ youth team proved to be too strong for the Hawks as they left the court with a seven-goal winning margin (40-33). Just four days after their round one match-up, the Waves faced the Sovereigns in round two where the Sovereigns took ownership of the netball court in the under-19s (49-59) and division one (48-71) grades. But the Waves got their revenge in the Championship match where they maintained a strong lead throughout to eventually open up a 46-goal winning margin. The shooters ended up scoring 71 goals from their 100 attempts and ended the game at 71-25. Division One coach Lindy Dowell named Claudia Whitfort (wing defence and centre) and Alex Maher (goal attack and goal shooter) as “absolute standouts” in her team last week, while Jess Whitfort said championship captain

Jess Maher (goal keeper) was “best on court” after her stellar performance on former Vixen player, Kim Commane. The Southern Saints also entered their first two rounds for the VNL season but without such success. In round one, the under-19s and championship matches were highly competitive against Boroondara Express as the sides went goal-forgoal throughout the games. Despite remaining evenly matched, both of the Saints’ sides were eventually overcome by Boroondara being defeated by six and five goals respectively. The Southern Saints struck back with a convincing win by their division one side with the final score finishing at 54-42. The Saints walked away from round two no better, with three losses under their belt against City West Falcons. The Falcons defence shut down the Saints’ ability to feed the netball into the goal circle as they finished up with victories in the under-19s (38-48), division one (56-57) and championship (48-68) matches. The Saints remain hopeful for round three where they face Melbourne University Lightning, while the Waves will prepare for their game against the Ariels.