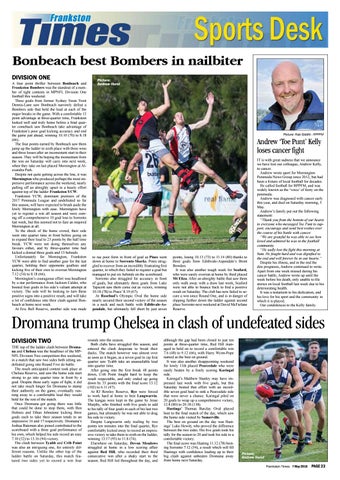 A four point thriller between Bonbeach and Frankston Bombers was the standout of a number of tight contests in MPNFL Division One football this weekend. Three goals from former Sydney Swan Trent Dennis-Lane saw Bonbeach narrowly defeat a Bombers side that held the lead at each of the major breaks in the game. With a comfortable 15 point advantage at three-quarter time, Frankston looked well and truly home before a final quarter comeback saw Bonbeach take advantage of Frankston’s poor goal kicking accuracy and end the game just ahead, winning 10.10 (70) to 8.18 (66). The four points earned by Bonbeach saw them jump up the ladder to sixth place with three wins and three losses after an inconsistent start to their season. They will be hoping the momentum from the win on Saturday will carry into next week, when they take on last placed Mornington at Alexandra Park. Despite not quite getting across the line, it was Mornington who produced perhaps the most impressive performance across the weekend, nearly pulling off an almighty upset in a hearty effort against top of the ladder Frankston YCW. Frankston YCW, dominant premiers of the 2017 Peninsula League and undefeated so far this season, will have expected to brush aside the lowly Mornington with ease. Mornington have yet to register a win all season and were coming off a comprehensive 10 goal loss to Sorrento last week, but this seemed not to faze an inspired Mornington at all. To the shock of the home crowd, their side went into quarter time in front before going on to expand their lead to 23 points by the half time break. YCW were not doing themselves any favours either, and by three-quarter time had kicked a dismal three goals and 13 behinds. Unfortunately for Mornington, Frankston YCW were able to find another gear for the last quarter, holding their opponents goalless and kicking five of their own to overrun Mornington 7.12 (54) to 8.18 (66). Mornington’s courageous effort was headlined by a star performance from Jackson Calder, who booted four goals in his side’s valiant attempt at victory. The side will be looking to turn these positive signs into a positive result, and will take a lot of confidence into their clash against Bonbeach at home next week. At Eric Bell Reserve, another side was made

to rue poor form in front of goal as Pines went down at home to Sorrento Sharks. Pines struggled to recover from an incredibly frustrating first quarter, in which they failed to register a goal but managed to put six behinds on the scoreboard. Sorrento also struggled for accuracy in front of goals, but ultimately three goals from Luke Tapscott saw them come out as victors, winning 10.18 (78) to Pines’ 8.19 (67). At Rosebud’s Olympic Oval the home side nearly secured their second victory of the season in a neck and neck battle with Edithvale-Aspendale, but ultimately fell short by just seven

points, losing 10.13 (73) to 11.14 (80) thanks to three goals from Edithvale-Aspendale’s Brent Bowden. It was also another tough week for Seaford, who were easily overrun at home by third placed Mt Eliza. After an almighty battle that saw them only walk away with a draw last week, Seaford were not able to bounce back to find a positive result on Saturday. The club has now failed to secure a win since Round One, and is in danger of slipping further down the ladder against second place Sorrento next weekend at David McFarlane Reserve.

IT is with great sadness that we announce we have lost our colleague, Andrew Kelly, to cancer. Andrew wrote sport for Mornington Peninsula News Group since 2012, but had been a fixture of local football for decades. He called football for RPPFM, and was widely known as the ‘voice’ of footy on the peninsula. Andrew was diagnosed with cancer early this year, and died on Saturday morning, 5 May. Andrew’s family put out the following statement: “Thank you from the bottom of our hearts to everyone who messaged Toe Punt to support, encourage and send best wishes over the course of his battle with cancer. “We are grateful he was able to see how loved and admired he was in the football community. “He sadly lost the fight this morning at 9am. He fought hard and was dignified to the end and will forever be in our hearts.” Despite his illness, and in the end the dire prognosis, Andrew continued to write. Apart from one week missed during his cancer battle, Andrew wrote up until the week before his death, only unable to file stories on local football last week due to his deteriorating health. It was a testament to his dedication, and his love for his sport and the community in which it is played. Our condolences to the Kelly family.

THE top of the ladder clash between Dromana and Chelsea was the headliner of the MPNFL Division Two competition this weekend, in a match that saw two sides both sitting undefeated going into Round Five do battle. The much anticipated contest took place at Chelsea Reserve, and saw the home side start strong to go into quarter time in front by a goal. Despite these early signs of fight, it did not take much longer for Dromana to stamp their authority on the game, eventually running away to a comfortable lead they would hold for the rest of the match. Once Dromana got going there was little that could be done to stop them, with Ben Holmes and Ethan Johnstone kicking three goals each to take their season totals to an impressive 16 and 17 respectively. Dromana’s Joshua Bateman also joined contributed to the scoreboard with a three goal performance of his own, which helped his side record an easy 7.10 (52) to 13.16 (94) victory. The clash between Tyabb and Crib Point was also an intriguing one, for entirely different reasons. Unlike the other top of the ladder battle on Saturday, this match featured two sides yet to record a win four

rounds into the season. Both clubs have struggled this season, and entered the clash desperate to break their ducks. The match however was almost over as soon as it began, as a seven goal to zip first quarter saw Tyabb take an unassailable lead into quarter time. After going into the first break 48 points down, Crib Point fought hard to keep the result respectable, and only ended up going down by 55 points with the final score 15.12 (102) to 6.11 (47). At RJ Rowley Reserve, Rye were forced to work hard at home to best Langwarrin. The kangas were kept in the game by Jesse Murphy, who finished with five goals to add to his tally of four goals in each of his last two games, but ultimately he was not able to drag his side to victory. Despite Langwarrin only trailing by two points ten minutes into the final quarter, Rye comfortably kicked away to record an impressive victory to take them to sixth on the ladder, winning 13.17 (95) to 11.8 (74). Elsewhere on Saturday, Devon Meadows struggled at home in a low scoring affair against Red Hill, who recorded their third consecutive win after a shaky start to the season. Red Hill led throughout the day, and

although the gap had been closed to just ten points at three-quarter time, Red Hill managed to hold on to record a comfortable win 7.6 (48) to 9.12 (66), with Harry Wynn-Pope named as the best on ground. It was also another disappointing weekend for lowly 11th placed Pearcedale who were easily beaten by a freely scoring Karingal side. Karingal’s Matthew Stanley may have impressed last week with five goals, but this Saturday bested that effort with an incredible seven goal haul to sink a Pearcedale side that were never a chance. Karingal piled on 20 goals to wrap up a comprehensive victory, 12.8 (80) to 20.18 (138). Hastings’ Thomas Barclay Oval played host to the final match of the day, which saw the home side visited by Somerville. The best on ground on the day was Hastings’ Luke Hewitt, who proved the difference between the two sides. His five goals took his tally for the season to 20 and took his side to a comfortable victory. The final score was Hasting 11.12 (78) besting Sorrento 7.12 (54), a result which will fill Hastings with confidence leading up to their big clash against unbeaten Dromana away from home next Saturday.