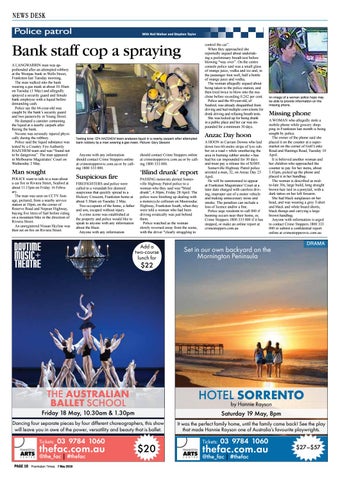 With Neil Walker and Stephen Taylor

Bank staff cop a spraying A LANGWARRIN man was apprehended after an attempted robbery at the Westpac bank in Wells Street, Frankston last Tuesday morning. The man walked into the bank wearing a gas mask at about 10.30am on Tuesday (1 May) and allegedly sprayed a security guard and female bank employee with a liquid before demanding cash. Police say the 66-year-old was caught by the bank’s security guard and two passers-by in Young Street. He dumped a canister containing the liquid at a nearby carpark after fleeing the bank. No-one was seriously injured physically during the robbery. Police said the liquid substance was tested by a Country Fire Authority HAZCHEM team and was “found not to be dangerous”. The man appeared in Melbourne Magistrates’ Court on Wednesday 2 May.

Man sought POLICE want to talk to a man about a car fire in Riviera Street, Seaford at about 11.15pm on Friday 16 February. The man was seen on CCTV footage, pictured, from a nearby service station at 10pm, on the corner of Reserve Road and Nepean Highway, buying five litres of fuel before riding on a mountain bike in the direction of Riviera Street. An unregistered Nissan Skyline was then set on fire on Riviera Street.

control the car”. When they approached she reportedly argued about undertaking a preliminary breath test before blowing “way over”. On the centre console police said was a small glass of orange juice, vodka and ice and, in the passenger foot well, half a bottle of orange juice and vodka. The woman allegedly argued about being taken to the police station, and then tried twice to blow into the machine before recording 0.242 per cent. Police said the 40-year-old, of Seaford, was already disqualified from driving and had multiple convictions for drink driving and refusing breath tests. She was locked up for being drunk in a public place and her car was impounded for a minimum 30 days.

Anyone with any information should contact Crime Stoppers online at crimestoppersvic.com.au or by calling 1800 333 000.

Suspicious fire FIREFIGHTERS and police were called to a verandah fire deemed suspicious that quickly spread to a Hickory Crescent, Frankston home at about 5.30am on Tuesday 2 May. Two occupants of the home, a father and son, escaped without injury. A crime scene was established at the property and police would like to speak to anyone with any information about the blaze. Anyone with any information

should contact Crime Stoppers online at crimestoppersvic.com.au or by calling 1800 333 000.

‘Blind drunk’ report PASSING motorists alerted Somerville Highway Patrol police to a woman who they said was “blind drunk”, 4.30pm, Friday 28 April. The police were finishing up dealing with a motorcycle collision on Moorooduc Highway, Frankston South, when they were told a woman who had been driving erratically was just behind them. Police watched as the woman slowly reversed away from the scene, with the driver “clearly struggling to

Anzac Day hoon A HOON in Carrum Downs who laid down two 60-metre strips of tyre rubber on a road – while smothering the area in burning rubber smoke – has had his car impounded for 30 days and must pay a release fee of $1005. Somerville Highway Patrol police arrested a man, 32, on Anzac Day 25 April. He will be summonsed to appear at Frankston Magistrates’ Court at a later date charged with careless driving, improper use of a motor vehicle and making unnecessary noise and smoke. The penalties can include a loss of licence and/or a fine. Police urge residents to call 000 if hooning occurs near their home, or, Crime Stoppers 1800 333 000 if it has stopped, or make an online report at crimestoppers.com.au

An image of a woman police hope may be able to provide information on the missing phone.

Missing phone A WOMAN who allegedly stole a mobile phone while grocery shopping in Frankston last month is being sought by police. The owner of the phone said she placed it on the counter at a supermarket on the corner of Golf Links Road and Hastings Road, Tuesday 10 April. It is believed another woman and her children who approached the counter to pay for her items, about 5.45pm, picked up the phone and placed it in her handbag. The woman is described as midto-late 30s, large build, long straight brown hair tied in a ponytail, with a dark tattoo on her left forearm. She had black sunglasses on her head, and was wearing a grey T-shirt and black and white board shorts, black thongs and carrying a large brown handbag. Anyone with information is urged to contact Crime Stoppers 1800 333 000 or submit a confidential report online at crimestoppersvic.com.au

Set in our own backyard on the Mornington Peninsula

Dancing four separate pieces by four different choreographers, this show will leave you in awe of the power, versatility and beauty that is ballet.

It was the perfect family home, until the family came back! See the play that made Hannie Rayson one of Australia’s favourite playwrights.