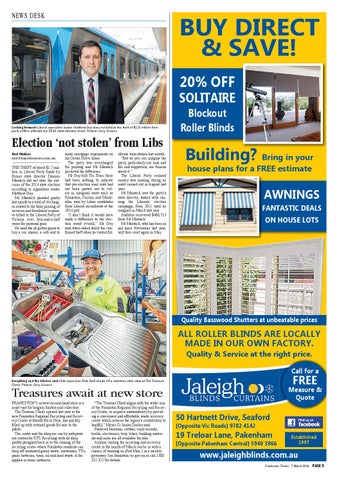 Election ‘not stolen’ from Libs Neil Walker neil@baysidenews.com.au THE THEFT of about $1.5 million in Liberal Party funds by former state director Damien Mantach did not alter the outcome of the 2014 state election according to opposition leader Matthew Guy. Mr Mantach pleaded guilty last month to a total of 44 charges related to the false printing of invoices and fraudulent expenses billed to the Liberal Party of Victoria over four-and-a-half years for personal gain. He used the ill-gotten gains to buy a car, shares, a cafe and to

make mortgage repayments on his Ocean Grove home. The party was overcharged for printing and Mr Mantach pocketed the difference. Mr Guy told The Times there had been nothing to indicate that pre-election mail outs had not been posted out to voters in marginal seats such as Frankston, Carrum and Mordialloc won by Labor candidates from Liberal incumbents at the 2014 poll. “I don’t think it would have made a difference to the election result overall,” Mr Guy said when asked about the confirmed theft when he visited Ed-

ithvale train station last month. “But as you can imagine the party, particularly our rank and file and supporters, are furious about it.” The Liberal Party realised money was missing during an audit carried out in August last year. Mr Mantach was the party’s state director, tasked with running the Liberals’ election campaign, from 2011 until he resigned in March last year. Auditors recovered $466,713 from Mr Mantach. Mr Mantach, who has been in jail since November last year, will face court again in May.

ALL ROLLER BLINDS ARE LOCALLY MADE IN OUR OWN FACTORY. Quality &amp; Service at the right g p price. Call for a

Everything and the kitchen sink: Site supervisor Rick Stoll shows off a stainless steel steal at The Treasure Chest. Picture: Gary Sissons

Treasures await at new store FRANKSTON’S newest second-hand store is a must visit for bargain hunters and collectors. The Treasure Chest, opened last year at the new Frankston Regional Recycling and Recovery Centre at Harold Rd in Skye, has quickly filled up with restored goods for sale to the public. The centre and the shop are run by independent contractor KTS Recycling with all shop profits ploughed back in to the running of the recycling centre where Frankston residents can drop off unwanted green waste, mattresses, TVs, paint, batteries, tyres, oil and hard waste. A fee applies in some instances.

“The Treasure Chest aligns with the wider aim of the Frankston Regional Recycling and Recovery Centre, to improve sustainability by providing a convenient and affordable waste recovery centre which reduces the region’s contribution to landfill,” Mayor Cr James Dooley said. Preloved furniture, clothes, vinyl records, books, electronics, toys, bikes, building materials and more are all available for sale. Anyone visiting the recycling and recovery centre in the month of March can be in with a chance of winning an iPad Mini 2 in a weekly giveaway. See frankston.vic.gov.au or call 1300 322 322 for details.