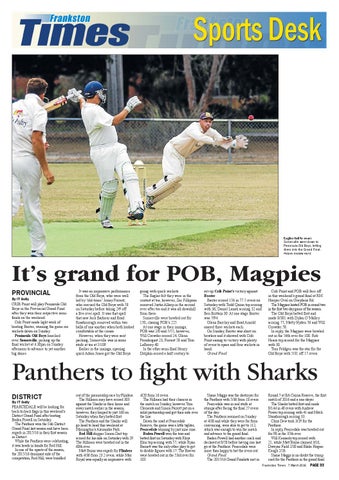 Eagles fail to soar: Somerville went down to Peninsula Old Boys, letting them into the Grand Final. Picture: Andrew Hurst

It’s grand for POB, Magpies PROVINCIAL By IT Gully CRIB Point will play Peninsula Old Boys in the Provincial Grand Final after they won their respective semifinals on the weekend. Crib Point made light work of beating Baxter, winning the game six wickets down on Sunday. Peninsula Old Boys knocked over Somerville, picking up the final wicket at 4.30pm on Sunday afternoon to advance to yet another big dance.

It was an impressive performance from the Old Boys, who were well led by ‘old-timer’ Jonny Forrest, who rescued the Old Boys with 58 on Saturday before taking 2/9 off a five over spell. It was that spell that saw Jack Barbour and Brad Rossborough removed within two balls of one another when both looked comfortable at the crease. However, when they were sent packing, Somerville was in some strife at tea at 5/109. Earlier in the innings, opening quick Adam Jones got the Old Boys

going with quick wickets. The Eagles felt they were in the contest at tea, however, Zac Fillipone removed Justin Allsop in the second over after tea and it was all downhill from there. Somerville were bowled out for 150, chasing POB’s 225. At one stage in their innings, POB was 2/0 and 5/55, however, Will Crowder scored 24, Glenn Prendergast 23, Forrest 58 and Tom LaBrooy 40. In the other semi-final Henry Dolphin scored a half century to

set-up Crib Point’s victory against Baxter. Baxter scored 156 in 77.5 overs on Saturday with Todd Quinn top scoring with 36, Daniel Lanati scoring 32 and Ben Brittain 30. At one stage Baxter was 7/94. Glenn Barclay and Brad Arnold snared three wickets each. On Sunday, Baxter was short on bowlers and it showed with Crib Point easing to victory with plenty of overs to spare and four wickets in hand. Grand Final

Crib Point and POB will face off in this weekend’s grand final at RM Hooper Oval on Graydens Rd. The Magpies hosted POB in round two in the first two day game of the season. The Old Boys batted first and made 8/301 with Dylan O’Malley scoring 77, Matty Hyden 76 and Will Crowder 58. In reply, the Magpies were bowled out in the 56th over for 108. Rob Hearn top scored for the Magpies with 30. Tom Feldgen was the star for the Old Boys with 5/31 off 17 overs.

Panthers to fight with Sharks DISTRICT

By IT Gully PEARCEDALE will be looking for back-to-back flags in this weekend’s District Grand Final after beating Baden Powell on Saturday. The Panthers won the Sub District Grand Final last season and have been superb in 2015/16 in their first season in District. While the Panthers were celebrating, it was heads in hands for Red Hill. In one of the upsets of the season, the 2015/16 dominant side of the competition, Red Hill, were bundled

out of the premiership race by Flinders. The Hillmen may have scored 303 against the Sharks in their home and away match earlier in the season, however, they limped to just 160 on Saturday when they batted first. The Panthers and the Sharks will go head to head this weekend at Mornington’s Alexandra Park. Red Hill skipper Simon Dart top scored for his side on Saturday with 29. The Hillmen were bowled out in the 68th over. Matt Burns was superb for Flinders with 4/36 from 23.2 overs, while Max Royal was equally as impressive with

4/20 from 16 overs. The Hillmen had their chances in the match on Sunday, however Tom Clements and Simon Parrott put on a solid partnership and got their side over the line. Down the road at Pearcedale Reserve, the game was a little tighter, Pearcedale winning by just nine runs. Baden Powell won the toss and batted first on Saturday with Rhys Elmi top scoring with 57, while Ryan Barnett was the only other play to get to double figures with 17. The Braves were bowled out in the 53rd over for 103.

Shane Maggs was the destroyer for the Panthers with 5/36 from 18 overs. Pearcedale was in real strife at stumps after facing the final 27 overs of the day. The Panthers resumed on Sunday at 4/38 and while they were far from convincing, were able to get to 112, which was enough to win the match and advance to the grand final. Baden Powell had another crack and declared at 8/58 before having one last go at the Panthers. Pearcedale were more than happy to bat the overs out. Grand Final The 2015/16 Grand Finalists met in

Round 7 at BA Cairns Reserve, the first match of 2016 and a one-dayer. The Sharks batted first and made 8/144 in 40 overs with Andrew Power top scoring with 41 and Mitch Stansborough scoring 33. Chris Dew took 3/29 for the Panthers. In reply, Pearcedale was bowled out for 98 in the 35th over. Will Kennedy top scored with 21, while Matt Burns claimed 3/16, Dwayne Field 2/30 and Blake HoganKeogh 2/26. Shane Maggs is no doubt the trump card for the Panthers in the grand final. Frankston Times 7 March 2016