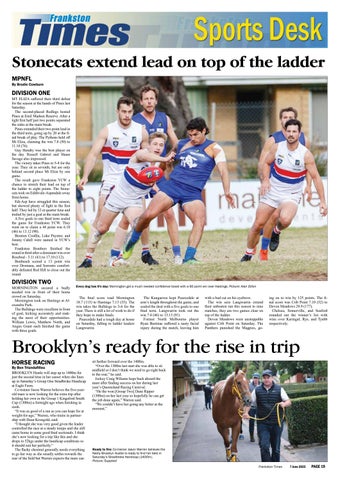 MT ELIZA suffered their third defeat for the season at the hands of Pines last Saturday. The second-placed Redlegs hosted Pines at Emil Madsen Reserve. After a tight first half just two points separated the sides at the main break. Pines extended their two point lead in the third term, going up by 20 at the final break of play. The Pythons held off Mt Eliza, claiming the win 7.8 (50) to 11.10 (76). Guy Hendry was the best player on the day. Russell Gabriel and Shane Savage also impressed. The victory takes Pines to 5-4 for the year. They sit in seventh, but are only behind second place Mt Eliza by one game. The result gave Frankston YCW a chance to stretch their lead on top of the ladder to eight points. The Stonecats took on Edithvale-Aspendale away from home. Edi-Asp have struggled this season, but showed plenty of fight in the first half. They led by 13 at quarter time and trailed by just a goal at the main break. A five goals to one third term sealed the game for Frankston YCW. They went on to claim a 44 point win 6.10 (46) to 13.12 (90). Brenton Credlin, Luke Paynter, and Jimmy Cahill were named in YCW’s best. Frankston Bombers finished the round in third after a dominant win over Rosebud - 5.11 (41) to 17.10 (112). Bonbeach scored a 13 point win over Dromana, and Sorrento comfortably defeated Red Hill to close out the round.

MORNINGTON secured a badly needed win in front of their home crowd on Saturday. Mornington took on Hastings at Alexandra Park. The Bulldogs were excellent in front of goal, kicking accurately and making the most of their opportunities. William Lewis, Matthew North, and Angus Grant each finished the game with three goals.

Every dog has it&#39;s day: Mornington got a much needed confidence boost with a 60 point win over Hastings. Picture: Alan Dillon

The final score read Mornington 18.7 (115) to Hastings 7.13 (55). The win takes the Bulldogs to 3-6 for the year. There is still a lot of work to do if they hope to make finals. Pearcedale had a tough day at home on Saturday, falling to ladder leaders Langwarrin.

The Kangaroos kept Pearcedale at arm’s length throughout the game, and sealed the deal with a five goals to one final term. Langwarrin took out the win 7.4 (46) to 13.13 (91) Former North Melbourne player Ryan Bastinac suffered a nasty facial injury during the match, leaving him

with a bad cut on his eyebrow. The win sees Langwarrin extend their unbeaten run this season to nine matches, they are two games clear on top of the ladder. Devon Meadows were unstoppable against Crib Point on Saturday. The Panthers punished the Magpies, go-

ing on to win by 125 points. The final score was Crib Point 7.10 (52) to Devon Meadows 28.9 (177). Chelsea, Somerville, and Seaford rounded out the winner’s list with wins over Karingal, Rye, and Tyabb respectively.

Brooklyn’s ready for the rise in trip HORSE RACING

By Ben Triandafillou BROOKLYN Hustle will step up to 1400m for just the second time in her career when she lines up in Saturday’s Group One Stradbroke Handicap at Eagle Farm. Co-trainer Jason Warren believes the five-yearold mare is now looking for the extra trip after holding her own in the Group 1 Kingsford Smith Cup (1300m) a fortnight ago when finishing in sixth. “It was as good of a run as you can hope for at weight-for-age,” Warren, who trains in partnership with Dean Krongold, said. “I thought she was very good given the leader controlled the race at a steady tempo and she still came home in some good final sectionals. I think she’s now looking for a trip like this and she drops to 52kgs under the handicap conditions so it should suit her perfectly.” The flashy chestnut generally needs everything to go her way as she usually settles towards the rear of the field but Warren expects the mare can

sit further forward over the 1400m. “Over the 1300m last start she was able to sit midfield so I don’t think we need to go right back to the rear,” he said. Jockey Craig Wiliams hops back aboard the mare after finding success on her during last year’s Queensland Racing Carnival. “He the won [Group Two] Dane Ripper (1300m) on her last year so hopefully he can get the job done again,” Warren said. “We couldn’t have her going any better at the moment.”