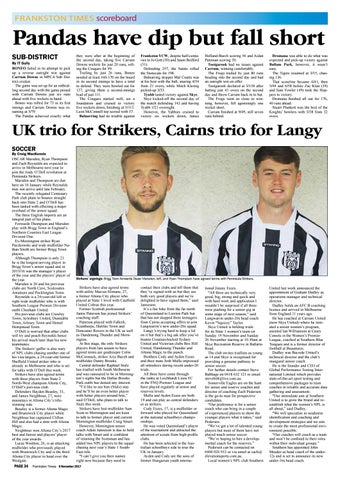 By IT Gully BONEO failed in its attempt to pick up a reverse outright win against Carrum Downs in MPCA Sub District cricket. The game was set up for an enthralling second day with the game poised with Carrum Downs just six runs ahead with five wickets in hand. Boneo was rolled for 73 in its first innings and Carrum Downs was resuming at 5/79. The Pandas achieved exactly what

they were after at the beginning of the second day, taking five Carrum Downs wickets for just 20 runs, rolling the Cougars for 99. Trailing by just 26 runs, Boneo needed at least 160-170 on the board in its second innings to have a total to defend. They were bowled out for 137, giving them a second-innings lead of just 111. The Cougars started well, set a foundation and cruised to victory five wickets down, finishing at 5/115. Leon McConnell top scored with 37. Balnarring had no trouble against

Frankston YCW, despite half-centuries to Jo Gott (50) and Jason Bedford (51). Defending 257, the Saints rolled the Stonecats for 198. Balnarring skipper Mal Coutts was at his best with the ball, snaring 4/34 from 21 overs, while Mitch Kleinig picked-up 3/33. Tyabb tasted victory against Skye. Skye kicked-off the second day of the match defending 142 and having Tyabb 1/21 overnight. However, the Yabbies cruised to victory six wickets down, James

Holland-Burch scoring 56 and Aidan Pateman scoring 50. Tootgarook had no issues against Carrum, winning comfortably. The Frogs trailed by just 80 runs heading into the second day and had an outright win on offer. Tootgarook declared at 3/158 after batting just 41 overs on the second day and threw Carrum back in to bat. The Frogs went so close to winning, however, fell agonisingly one wicket short. Carrum finished at 9/49, still seven runs behind.

By Craig MacKenzie OSCAR Marsden, Ryan Thompson and Zach Reynolds are expected to arrive in Melbourne next year to join the Andy O’Dell revolution at Peninsula Strikers. Marsden and Thompson are due here on 10 January while Reynolds may not arrive until late February. The recently relegated Centenary Park club plans to bounce straight back into State 2 and O’Dell has been tasked with effecting a major overhaul of the senior squad. The three English imports are an integral part of his plans. Forwards Thompson and Marsden play with Brigg Town in England’s Northern Counties East League Division One. Ex-Mornington striker Ryan Paczkowski and wide midfielder Nathan Smith are former Brigg Town players. Although Thompson is only 21 he is the longest-serving player in Brigg Town’s senior squad and in 2015/16 was the manager’s player of the year and the players’ player of the year. Marsden is 20 and his previous clubs are North Cave, Sculcoates Amateurs and Pocklington Town. Reynolds is a 24-year-old left or right wide midfielder who is with Southern League Premier Division outfit Chesham United. His previous clubs are Crawley Town, Aylesbury United, Dunstable Town, Arlesey Town and Hemel Hempstead Town. O’Dell is worried that other clubs will try and poach Reynolds hence his arrival much later than his new teammates. The Strikers’ gaffer is also wary of NPL clubs chasing another one of his visa targets, a 24-year-old former Sheffield United striker who is already in Melbourne and who is set for talks with O’Dell this week. Strikers have also agreed terms with three players from State 2 North-West champion Altona City, O’Dell’s previous club. Defenders Hayden Beasley, 31, and James Neighbour, 27, were mainstays in Altona City’s titlewinning side. Beasley is a former Altona Magic and Brunswick City player while Neighbour has captained Clifton Hill and also had a stint with Altona Magic. Neighbour won Altona City’s 2017 best and fairest and players’ player of the year awards. Lucas Wootton, 26, is an attacking midfielder who previously played with Brunswick City and is the third Altona City player to head over the Westgate.

Strikers have also agreed terms with utility Marcus Slimane, 27, a former Altona City player who played at State 1 level with Caulfield United Cobras this year. Former Scottish professional Jamie Paterson has joined Strikers’ coaching staff. Paterson played with Falkirk, Scunthorpe, Halifax Town and Doncaster Rovers in the UK as well as Dandenong Thunder and Mornington. At this stage, the only Strikers players from last season to have agreed terms are goalkeeper Colin McCormack, striker Aziz Bayeh and midfielder Danny Brooks. Central defender Raphael Stulz has trialled with South Melbourne and was rumoured to be in Mornington’s sights but the Dallas Brooks Park outfit has denied any interest. “I’d like to see him (Stulz) stay and he’ll be an even better player with better players around him,” said O’Dell, who plans to talk to Stulz this week. Strikers have lost midfielder Sam Scott to Mornington and are keen to talk to former player and current Mornington midfielder Craig Smart. However, Mornington senior coach Adam Jamieson is due to hold talks with Smart and is confident of retaining the Scotsman and has added two NPL players to the squad chasing next year’s State 1 SouthEast title. “I can’t give you their names right now because they need to

contact their clubs and tell them that they’ve signed with us but they are both very good players and we’re delighted to have signed them,” said Jamieson. It’s a fair hike from the far north of Queensland to Lawton Park but that has not stopped three teenagers from Cairns accepting offers to join Langwarrin’s new under-20s squad. Langy’s trying hard to keep a lid on it but that’s a big ask after you’ve beaten Croatian-backed Sydney United and Victorian clubs Box Hill United, Dandenong Thunder and Altona Magic to the punch. Brothers Cody and Ayden Eszes and their mate Josh Mulla impressed all onlookers during recent under-20 trials. All three have come through the ranks at Leichhardt Lions FC in the FNQ Premier League and have played regularly at senior and reserves levels. Mulla and Ayden Eszes are both 19 and can play as central defenders or as strikers. Cody Eszes, 17, is a midfielder or forward who played for Queensland at the national schoolboys championships. He was voted Queensland’s player of the tournament and attracted the attention of scouts from high-profile clubs. He has been selected in the Australian schoolboys side to tour the UK in January. Ayden and Cody are the sons of former Hungarian youth interna-

tional Jimmy Eszes. “All three are technically very good, big, strong and quick and with hard work and application I wouldn’t be surprised if all three were pushing for a senior gig at some stage of next season,” said Langwarrin under-20s head coach Kevin “Squizzy” Taylor. Skye United is holding trials for its State 1 women’s team on Sunday 19 November and Sunday 26 November starting at 10.30am at Skye Recreation Reserve in Ballarto Road. The club invites triallists as young as 14 and Skye is recognised for providing a genuine pathway to senior soccer. For further details contact Steve Babbage on 0418 632 121 or email steve848@live.com.au. Somerville Eagles are on the hunt for senior and reserve coaches and director of coaching Zach Pedersen is the go-to man for prospective candidates. “Our preference is for a senior coach who can bring in a couple of experienced players to show the younger players what it takes,” said Pedersen. “We’ve got a lot of talented young players but most of them have not played much senior soccer. “We’re hoping to hire a developmental coach for the reserves.” Pedersen can be contacted on 0400 026 912 or via email at zach@ elevationsports.com.au. Local women’s NPL club Southern

United last week announced the appointment of Graham Dudley as operations manager and technical director. Dudley holds an AFC B coaching licence and arrived in Melbourne from England 11 years ago. He has coached at Carrum United (now Skye United) where he initiated a senior women’s program, assisted Ian Williamson at Casey Comets in the Women’s Premier League, coached at Southern Blue Tongues and is a former director of football at Beaumaris. Dudley was Bayside United’s technical director and the club’s inaugural senior coach. He is the founder and CEO of Global Performance Testing International Limited which provides state-of-the-art sport testing and comprehensive packages to train coaches in reliable and accurate data gathering and assessment. “Our immediate aim at Southern United is to grow the brand and reestablish what the women’s NPL is all about,” said Dudley. “We will specialise in weakness identification and coaching and development strategies and we aim to create the most professional environment possible. “Our coaches will coach as a team and won’t be confined to their roles within their individual groups.” Southern has appointed John Meades as head coach of the under12s and is set to announce its new under-16s head coach.