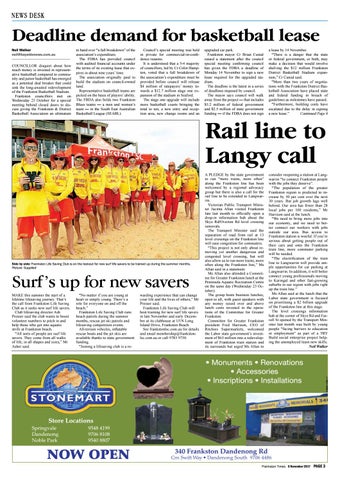 Deadline demand for basketball lease Neil Walker neil@baysidenews.com.au COUNCILLOR disquiet about how much money is invested in representative basketball compared to community and junior basketball has emerged as a potential deal breaker that could sink the long-awaited redevelopment of the Frankston Basketball Stadium. Frankston councillors met on Wednesday 25 October for a special meeting behind closed doors to discuss giving the Frankston &amp; District Basketball Association an ultimatum

to hand over “a full breakdown” of the association’s expenditure. The FDBA has provided council with audited financial accounts under the terms of its existing lease that expires in about nine years’ time. The association originally paid to build the stadium on council-owned land. Representative basketball teams are picked on the basis of players’ ability. The FBDA also fields two Frankston Blues teams — a men and women’s team — in the South East Australian Basketball League (SEABL).

Council’s special meeting was held in private for commercial-in-confidence reasons. It is understood that a 5-4 majority of councillors, led by Cr Colin Hampton, voted that a full breakdown of the association’s expenditure must be provided before council will release $4 million of ratepayers’ money towards a $12.7 million stage one expansion of the stadium in Seaford. The stage one upgrade will include more basketball courts bringing the total to ten, a new entry and reception area, new change rooms and an

upgraded car park. Frankston mayor Cr Brian Cunial issued a statement after the council special meeting confirming council has given the FDBA a deadline of Monday 14 November to sign a new lease required for the upgraded stadium. The deadline is the latest in a series of deadlines imposed by council. The mayor says council will walk away from the project — that includes $5.2 million of federal government and $2.5 million of state government funding — if the FDBA does not sign

a lease by 14 November. “There is a danger that the state or federal government, or both, may make a decision that would involve shelving the $12 million Frankston District Basketball Stadium expansion,” Cr Cunial said. “More than two years of negotiations with the Frankston District Basketball Association have placed state and federal funding in breach of guidelines as milestones have passed. “Furthermore, building costs have escalated due to the delay in signing a new lease.” Continued Page 6

Side by side: Frankston Life Saving Club is on the lookout for new surf life savers to be trained up during the summer months. Picture: Supplied

Surf ’s up for new savers MAKE this summer the start of a lifetime lifesaving journey. That’s the call from Frankston Life Saving Club as it seeks new surf life savers. Club lifesaving director Ash Presser said the club wants to boost volunteer numbers to pitch in and help those who get into aquatic strife at Frankston beach. “All sorts of people are surf life savers. They come from all walks of life, in all shapes and sizes,” Mr Asher said.

“No matter if you are young at heart or simply young. There’s a role for everyone on and off the beach.” Frankston Life Saving Club runs beach patrols during the summer months, rescue jet ski patrols and lifesaving competition events. All-terrain vehicles, inflatable rescue boats and the jet skis are available thanks to state government funding. “Joining a lifesaving club is a re-

warding experience that can change your life and the lives of others,” Mr Presser said. Frankston Life Saving Club will host training for new surf life savers in late November and early December at its clubhouse at 1/1N Long Island Drive, Frankston Beach. See frankstonlsc.com.au for details and email membership@frankstonlsc.com.au or call 9783 9730.

A PLEDGE by the state government to run “more trains, more often” along the Frankston line has been welcomed by a regional advocacy group but there is also a call for the rail line to be extended to Langwarrin. Victorian Public Transport Minister Jacinta Allan visited Frankston late last month to officially open a drop-in information hub about the Skye Rd/Overton Rd level crossing removals. The Transport Minister said the separation of road from rail at 13 level crossings on the Frankston line will ease congestion for commuters. “This project is not only about removing yet another dangerous and congested level crossing, but will also allow us to run more trains, more often along the Frankston line,” Ms Allan said in a statement. Ms Allan also attended a Committee for Greater Frankston lunch at the Peninsula Aquatic Recreation Centre on the same day (Wednesday 25 October). The group hosts business lunches, open to all, with guest speakers with any money raised over and above lunch costs invested in the operations of the Committee for Greater Frankston. Committee for Greater Frankston president Fred Harrison, CEO of Ritchies Supermarkets, welcomed the Labor state government’s investment of $63 million into a redevelopment of Frankston train station and its surrounds but urged Ms Allan to

consider reopening a station at Langwarrin “to connect Frankston people with the jobs they deserve”. “The population of the greater Frankston region is predicted to increase by 50 per cent over the next 30 years. But job growth lags well behind. Our area has fewer than 28 local jobs per 100 residents,” Mr Harrison said at the lunch. “We need to bring more jobs into our economy, and we need to better connect our workers with jobs outside our area. Bus access to Frankston station is woeful. If you’re serious about getting people out of their cars and onto the Frankston train line, more commuter parking will be needed. “The electrification of the train line to Langwarrin will provide ample opportunities for car parking at Langwarrin. In addition, it will better connect young professionals moving to Karingal and other fast-growing suburbs in our region with jobs right up the train line.” Ms Allan said at the lunch that the Labor state government is focused on prioritising a $2 billion upgrade of the Frankston line at this stage. The level crossings information hub at the corner of Skye Rd and Farrell St opened by the Transport Minister last month was built by young people “facing barriers to education or employment” as part of a TRY Build social enterprise project helping the unemployed learn new skills. Neil Walker