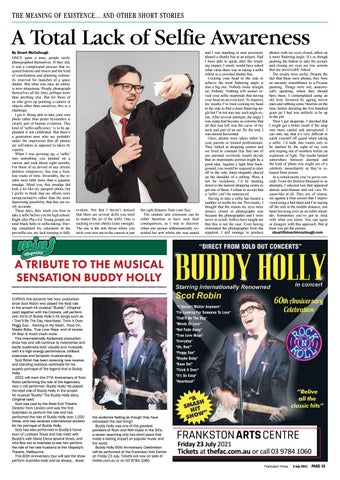 A Total Lack of Selfie Awareness By Stuart McCullough ONCE upon a time, people rarely photographed themselves. If they did, it was a complicated process that required buttons and timers and the kind of coordination and planning ordinarily reserved for launches of a space shuttle. But what was once an oddity is now ubiquitous. People photograph themselves all the time, perhaps more than anything else. But for those of us who grew up pointing a camera at objects other than ourselves, this is a challenge. I get it. Being able to take your own photo rather than pester bystanders is clearly part of human evolution. This kind of ‘selfie-sufficiency’ is to be applauded if not celebrated. But there’s a generation now who are probably under the impression that all photos are self-taken as opposed to taken by experts. When I was growing up, a ‘selfie’ was something you painted on a canvas and took about eight months. For those of us devoid of any artistic abilities whatsoever, this was a fruitless waste of time. Invariably, the results were little more than a gigantic smudge. Mind you, this smudge did look a lot like my passport photo, but I prefer to think that my efforts were unrepresentative rather than the more depressing possibility that they are eerily accurate. These days, they teach you how to take a selfie before you hit high school. Right after Phys Ed. Young people are total black belts in selfie-taking. Having completed my education in the pre-selfie era, my lack training is fully

evident. Not that I haven’t noticed that there are several skills you need to master the art of the selfie. One is sucking in your cheeks (easy enough). The one is the arm thrust where you stick your arm out so the camera is just

the right distance from your face. The random arm extension can be either harmless or have near fatal consequences, as I was to discover when one person enthusiastically extended her arm whilst she was seated

and I was standing in near proximity aboard a shuttle bus at an airport. Had I been able to speak after the resulting impact, I surely would have asked what value there was in taking a selfie whilst in a crowded shuttle bus. Cocking your head to the side to achieve the most flattering angle is also a big one. Nobody looks straight on. Nobody. Nothing will sooner reveal your selfie ineptitude that having your head on an even keel. To improve my results, I’ve tried cocking my head to the side to find a more flattering angle but I’m not sure any such angle exists. After several attempts, the angle I was using had become so extreme that all that was left was the curve of my neck and part of an ear. By the end, I was almost horizontal. Once, photos were taken either by your parents or trained professionals. They lurked at shopping centres and we lived in constant fear that one of our parental overlords would decide that an impromptu portrait might be a good idea. Against a light blue background, you would be required to stare off to the side, hand elegantly placed on the shoulder of a sibling. Were it not for lockdown, I’d be heading down to the nearest shopping centre to get one of these. I refuse to accept that a ‘selfie’ can’t be outsourced. Having to take a selfie has busted a number of myths for me. Previously, I thought that the reason my eyes were always closed in photographs was because the photographer and I were never in synch. Selfies have taught me that this is not the case. Even having eliminated the photographer from the equation, I still manage to produce

photos with my eyes closed, albeit on a more flattering angle. It’s as though pushing the button to take the picture and closing my eyes are two actions that are inextricably linked. The results were awful. Despite the fact that these were photos, they bore an uncanny resemblance to a Picasso painting. Things were not, anatomically speaking, where they should have been. I contemplated using an old trick favoured by ageing movie stars and rubbing some Vaseline on the lens, before deciding the five hundred gram jar I had was unlikely to be up to the job. Then I got desperate. I decided that I might get a better result if the snap was more candid and unexpected. I can only say that it’s very difficult to catch yourself off guard when taking a selfie. I’d walk into rooms only to be startled by the sight of my own arm leaping out of nowhere before an explosion of light. The results landed somewhere between alarmed and the kind of photo you might see of a celebrity immediately as they’re released from prison. At a certain point, you’ve got to concede. From the thirteen thousand or so attempts, I selected two that appeared almost semi-human and not very Picasso-like at all. They are, of course, set against a blue screen that I improvised using a bed sheet and I’m staring off the side in the middle distance, one hand hovering over an invisible shoulder. Sometimes you’ve got to stick with what you know. You can agree or disagree with this approach. But at least you get the picture. stuart@stuartmccullough.com

A TRIBUTE TO THE MUSICAL SENSATION BUDDY HOLLY DURING this dynamic two hour production show Scot Robin who played the lead role in the smash hit musical “Buddy”, (Original cast) together with his Crickets will perform over thirty of Buddy Holly’s hit songs such as - That’ll Be The Day, Heartbeat, Think It Over, Peggy Sue , Raining In My Heart, Rave On, Maybe Baby, True Love Ways and of course Oh Boy! & much much more. This Internationally Acclaimed production show has and will continue to mesmerise and excite audiences both visually and musically with it’s high energy performance, brilliant costumes and fantastic musicianship. Scot Robin has been receiving rave reviews and standing ovations worldwide for his superb portrayal of the legend that is Buddy Holly. 2021 will mark the 27th Anniversary of Scot Robin performing the role of the legendary rock n roll performer, Buddy Holly! He played the lead role of Buddy Holly in the smash hit musical "Buddy" The Buddy Holly story, (Original cast) Scot was cast by the West End Theatre Director from London and was the first Australian to perform the role and has performed the role of Buddy Holly over 1,000 times, and has received international acclaim for his portrayal of Buddy Holly. Scot has also performed in Buddy's home town of Lubbock Texas and has meet with Buddy's wife Maria Elena several times, and who flew out to Australia to see him perform the role of her late husband at Her Majesty's Theatre, Melbourne. This 60th anniversary tour will see the show perform Australia wide and as always... leave

the audience feeling as though they have witnessed the real thing!! Buddy Holly was one of the greatest pioneers of Rock and Roll music in the 50's, a career spanning only two short years that made a lasting impact on popular music and the world. Buddy Holly 60th Anniversary Celebration will be performed at the Frankston Arts Centre on Friday 23 July. Tickets are now on sale at thefac.com.au or on 03 9784 1060.