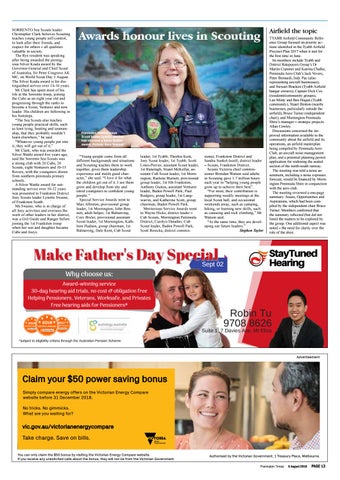 SORRENTO Sea Scouts leader Christopher Clark believes Scouting teaches young people self-control, to look after their friends, and respect for others – all qualities valuable in society. The Rye resident was speaking after being awarded the prestigious Silver Koala award by the Governor-General and Chief Scout of Australia, Sir Peter Cosgrove AK MC, on World Scout Day 1 August. The Silver Koala award is for distinguished service over 14-16 years. Mr Clark has spent most of his life at the Sorrento troop, joining the Cubs as an eight year old and progressing through the ranks to become a Scout, Venturer and now leader. His children are following in his footsteps. “The Sea Scouts also teaches young people practical skills, such as knot tying, boating and seamanship, that they probably wouldn’t learn elsewhere,” he said. “Whatever young people put into it, they will get out of it.” Mr Clark, who was awarded the Silver Wattle award five years ago, said the Sorrento Sea Scouts was a strong club with 20 Cubs, 20 Scouts, eight Venturers and 10-15 Rovers, with the youngsters drawn from southern peninsula primary schools. A Silver Wattle award for outstanding service over 10-12 years was presented to Frankston District Joey Scouts leader Lynette Swaine, of Frankston South. Ms Swaine, who is in charge of all Joey activities and oversees the work of other leaders in her district, was a Girl Guide and Ranger before joining the 1st Frankston troop when her son and daughter became Cubs and Joeys.

sioner, Frankston District and Sandra Sunkel-lozell, district leader – Scouts, Frankston District. Scouts Victoria chief commissioner Brendan Watson said adults in Scouting gave 1.7 million hours each year to “helping young people grow up to achieve their best”. “For most, their contribution is supporting weekly meetings at the local Scout hall, and occasional weekends away, such as camping, hiking, or learning new skills, such as canoeing and rock climbing,” Mr Watson said. “At the same time, they are developing our future leaders.” Stephen Taylor

Airfield the topic TYABB Airfield Community Reference Group focused on priority actions identified in the Tyabb Airfield Precinct Plan 2017 when it met for the first time in June. Its members include Tyabb and District Ratepayers Group’s Dr Martin Cranmer and Katrina Chalke; Peninsula Aero Club’s Jack Vevers, Peter Bernardi, Judy Pay (also representing aircraft businesses), and Stewart Bracken (Tyabb Airfield hangar owners); Captain Dick Cox (residents/community groups), Len Minty and Ben Hogan (Tyabb community), Stuart Benton (nearby businesses, particularly outside the airfield), Bruce Turner (independent chair), and Mornington Peninsula Shire’s manager – strategic projects Allan Cowley. Discussions concerned the improved information available to the community about the airfield and its operations, an airfield masterplan being compiled by Peninsula Aero Club, an aircraft noise management plan, and a potential planning permit application for widening the sealed section of the north-south runway. The meeting was told a noise assessment, including a noise exposure forecast, would be financed by Mornington Peninsula Shire in conjunction with the aero club. The meeting reviewed a one-page summary: Issues, Opportunities and Aspirations, which had been compiled by the independent chair Bruce Turner. Members confirmed that the summary reflected (but did not limit) the matters to be explored by the group. One additional aspect was noted – the need for clarity over the role of the shire.