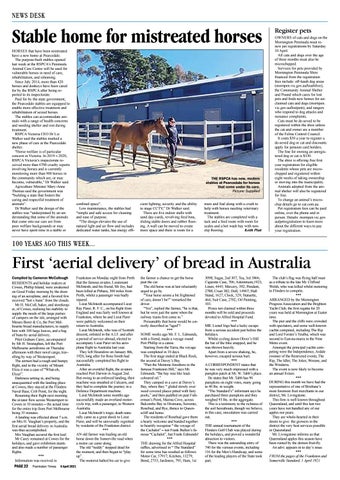 Stable home for mistreated horses HORSES that have been mistreated have a new home at Pearcedale. The purpose-built stables opened last week at the RSPCA’s Peninsula Animal Care Centre will be used for vulnerable horses in need of care, rehabilitation, and rehoming. Since July 2014, more than 420 horses and donkeys have been cared for by the RSPCA after being reported to its inspectorate. Paid for by the state government, the Pearcedale stables are equipped to enable more effective treatment and rehabilitation of seized horses. The stables can accommodate animals with a range of health concerns and needing shelter and rest during treatment. RSPCA Victoria CEO Dr Liz Walker said the stables marked a new phase of care at the Pearcedale shelter. “Horse welfare is of particular concern in Victoria. In 2019 – 2020, RSPCA Victoria’s inspectorate received more than 6700 cruelty reports involving horses and is currently monitoring more than 900 horses in the community which are, or may become, vulnerable,” Dr Walker said. Agriculture Minister Mary-Anne Thomas said the government was “building a state that fosters the caring and respectful treatment of animals”. Dr Walker said the design of the stables was “underpinned by an understanding that some of the animals that come into our care are from poor welfare backgrounds or may never have spent time in a stable or

THE RSPCA has new, modern stables at Pearcedale for horses that come under its care. Picture: Supplied confined space”. Low maintenance, the stables had “simple and safe access for cleaning and ease of purpose. “The design elevates the use of natural light and air flow and includes dedicated water tanks, has energy effi-

cient lighting, security and the ability to stage CCTV,” Dr Walker said. There are five indoor stalls with sand day-yards, revolving feed bins, sliding stable doors and rubber flooring. A wall can be moved to create more space and there is room for a

mare and foal along with a crush to help with horses needing veterinary treatment. The stables are completed with a tack and a feed room with room for scales and a hot wash bay with nonslip flooring. Keith Platt

Register pets OWNERS of cats and dogs on the Mornington Peninsula must renew pet registrations by Saturday 10 April. All cats and dogs over the age of three months must also be microchipped. Services for pets provided by Mornington Peninsula Shire financed from the registration fees include: off-leash dog areas (mornpen.vic.gov.au/leashfree); the Community Animal Shelter and Pound which cares for lost pets and finds new homes for unclaimed cats and dogs (mornpen. vic.gov.au/lostpets); and rangers who respond to dog attacks and nuisance complaints. Cats must be de-sexed to be registered within the shire unless the cat and owner are a member of the Feline Control Council. It costs $50 a year to register a de-sexed dog or cat and discounts apply for pension card holders. The fine for owning an unregistered dog or cat is $330. The shire is offering free first year registration for eligible residents whose pets are microchipped and registered within eight weeks of taking ownership or moving into the municipality. Animals adopted from the animal shelter will also be registered for free. To change an animal’s microchip details go to car.com.au. Pet registration fees can be paid online, over the phone and in person. Details: mornpen.vic.gov. au/petregistration to learn more about the different ways to pay your registration.

First ‘aerial delivery’ of bread in Australia Compiled by Cameron McCullough RESIDENTS and holiday makers at Cowes, Phillip Island, were awakened on Good Friday morning by the droning of an aeroplane, and a favored few received “hot x buns” from the clouds. Mr H. McColl, baker, and storekeeper, of Cowes, realising his inability to supply the needs of the large parties of campers on the isle, arranged with Messrs Borer &amp; Co, the Port Melbourne bread manufacturers, to supply him with 100 large loaves, and a bag of buns by aerial delivery. Pilot Graham Carey, accompanied by Mr H. Stranaghan, left the Port Melbourne aerodrome on Thursday afternoon with their novel cargo, travelling by way of Westernport. The airmen had a rough and bumpy flight, and in the vicinity of Mount Eliza it was a case of “What-oh, Eliza!”. Darkness setting in, and being unacquainted with the landing place at Cowes, they stayed at the Flinders Naval Base, Crib Point, for the night. Resuming their flight next morning the aviator flew across Westernport to Cowes in 10 minutes – the actual time for the entire trip from Port Melbourne being 35 minutes. A landing was effected about 7 a.m. on Mrs H. Vaughan’s property, and the first aerial bread delivery in Australia was thus accomplished. Mrs Vaughan secured the first loaf. Mr Carey remained at Cowes for the holidays, and gave exhibition stunts and also made a number of passenger flights. *** Information was received in

Frankston on Monday night from Perth that the famous aviator, Lieutenant McIntosh, and his friend, Mr Joy, had been killed at Pithara, 300 miles from Perth, whilst a passenger was badly injured. Lieut McIntosh accompanied Lieut Ray Parer, R. F. C., on his flight from England and was fairly well known at Frankston, where he and Lieut Parer were publicly welcomed on their return to Australia. Lieut McIntosh, who was of Scottish descent, enlisted in the A.I.F. and after a period of service abroad, elected to accompany Lieut Parer on his aeroplane flight to Australia last year. They left Hounslow on January 8th, 1920, long after Sir Ross Smith had successfully completed his flight to Australia. After an eventful flight, the aviators reached Port Darwin in August 2nd. But owing to an enforced landing, their machine was smashed at Culcairn, and they had to complete the journey in a Defence Department machine. Lieut McIntosh some months ago successfully made an overland motorcycle trip, with a passenger, to Western Australia. Lieut McIntosh’s tragic death naturally came as a great shock to Lieut Parer, and will be universally regretted by residents of the Frankston district. *** AN old farmer was leading an old horse down the Somerville road when a motor car came along. The old “neddy” stopped dead for the moment, and then began to “play up”. The motorist halted his car to give

the farmer a chance to get the horse past the car. The old horse was at last reluctantly urged to go by. “Your horse seems a bit frightened of cars, doesn’t he?” remarked the driver. “Yes”, replied the farmer, “he is that, but he were just the same when the railway trains first come in.” Presumably that horse would be correctly described as “aged”! *** SOME weeks ago Mr. F. L. Edmunds, with a friend, made a voyage round Port Phillip in a canoe. Starting from the Yarra, the voyage was completed in 10 days. The first stage ended at Black Rock, the second at Davey’s Bay. “Past the Mentone foreshore to the famous Frankston Hill,” says Mr. Edmunds. “the bay was like leadcoloured oil.” They camped in a cave at Davey’s Bay, where they “ glided slowly over weed covered places pitted with fairy pools,” and then paddled on past Fisherman’s Point, Marina Cove, across Balcombe Bay to Dromana, Sorrento, Rosebud, and Rye, thence to Queenscliff and home. The residents of Rosebud gave them a hearty welcome and banded together to heartily recognise “ the voyage of the Cachalot” – not Frank Bullen’s famous “Cachalot”, but Frank Edmunds! *** THE drawing for the Alfred Hospital raffles, advertised in “ The Standard” for some time has resulted as follows: Motor Car, 57917; Kitchen, 13279; Bond, 2755; Jardinere, 795; Ham, 1st

3098; Sugar, 2nd 307; Tea, 3rd 3866; Cigarette Case, 706; Adornment,1923; Linen, 4445; Mercery, 392; Pendant, 2788; Cruet 382; Doll, 14967; Hall Stand, 1627; Clock, 529; Statuette, 464; Suit Case, 2702; Oil Painting, 103. Prizes not claimed within three months will be sold and proceeds devoted to Alfred Hospital Fund. *** MR. Lionel Ings had a lucky escape from a serious accident just before the holidays. Whilst cycling down Oliver’s Hill the bar of the bike snapped, and he was thrown heavily. Apart from a severe shaking, he, however, escaped serious hurt. *** A CORRESPONDENT states that he was very much impressed with a pumpkin patch at Mr. W. Tabb’s place. He states that Mr. Tabb has 90 pumpkins on eight vines, many going to 40 lbs. in weight. “The Standard’s” informant says he purchased three pumpkins and they weighed 93 lbs. in the aggregate. This is a testimony to the richness of the soil hereabouts, though we believe, in this case, inoculation was carried out. *** THE annual tournament of the Flinders Golf Club was played during the holidays, and proved a wonderful attraction to visitors. There was the astounding entry of 740 for the various events, including 116 for the Men’s Handicap, and some of the leading players of the State took part.

The club’s flag was flying half mast as a tribute to the late Mr. Clifford Welsh, who was killed whilst motoring to Flinders to compete. *** ARRANGED by the Mornington Progress Association and the Brighton Yacht Club, the first regatta for 20 years was held at Mornington at Easter time. The pier and the cliffs were crowded with spectators, and some well-known yachts competed, including The Rip and Lord Forster’s Yeulba; which was second to Eun-na-marra in the Nine Metre event. Amongst the principal yachts competing were the Independence, Ardale (winner of the Restricted event), The Rip, The Idler, The Joker, Worane, and the Windarra. The event is now likely to become an annual fixture. *** DURING this month we have had the representative of one of Brisbane’s most foremost fruit merchants in our district, Mr. Livingstone. This firm is well known throughout Queensland, and until this last two years have not handled any of our apples nor pears. They are whole-hearted in their desire to give the growers in the district the very best services possible in Queensland. Mr. Livingstone informs us that Queensland apples this season have been ruined by the demon fruit-fly. An advt. appears in to day’s issue. *** FROM the pages of the Frankston and Somerville Standard, 1 April 1921