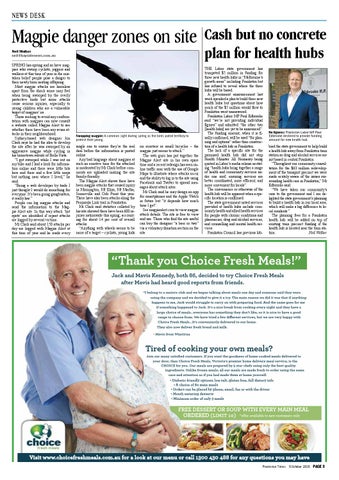 Magpie danger zones on site Neil Walker neil@baysidenews.com.au SPRING has sprung and so have magpies who swoop cyclists, joggers and walkers at this time of year in the mistaken belief people pose a danger to CRIMES their UNSOLVED newly born nesting offspring. SEXUAL Most magpieASSAULT attacks are harmless apart from the shock some may feel areswooped by the overly whenPolice being searching for but some attacks protective birds a man who cause serious injuries, especially to allegedly young children who are a vulnerable sexually targetassaulted of magpies’ a ire. Those seeking woman afterto avoid any confrontationentering with magpies can now consult her a website called Magpie Alert to see Rosella St apartment in been any avian atwhether there have tacks in their neighbourhood. on Saturday, web designer Jon Sydney-based 31,he2014. ClarkMay says had the idea to develop It is alleged the woman was home the site after he was swooped by an alone at 5pm after returning home aggressive magpie while cycling in from the nearby shops. his hometown suburbaccess of Bella Vista. The man gained to the “I got swoopedapartment while I was out on ground-floor through the my bike and Ifront had adoor, lookwent for informaunlocked into the tion victim’s online and thereand were little bits bedroom allegedly assaulted her. little maps here sexually and there and a few Police have released fit he but nothing near where aIFACE lived,” said. image similar to the man who they believe can assist with I “Being a web developer by trade their inquiries. just thought I would do something for He is described as caucasian in everyone. It’s been going gangbusters, appearance, aged in his it really latehas.” 20s to early 30s, with blonde People can log magpie attacks and hair, brown send eyes, the blonde information to the Magfacialsite. hair and pie Alert In this way attack ‘hot spots’a thin are build. identified if repeat attacks are logged by several victims. Mr Clark said about 150 attacks per Report information confidentially at day are logged with Magpie Alert at crimestoppersvic.com.au or phone this time year and he reads every Crime of Stoppers on 1800 333 000.

FRANKSTON A car lost control these days in the near future.’’ and smashed into a parked car before crashing into a brick fence on FRANKSTON A man has gone Wednesday, September 16, about on a crime rampage using a 8am. It is believed the male driving guitar after stealing his uncle’s car. the Holden Commodore was travelling The white Ford sedan, along with east along Beach St in Frankston property, was taken from Churchill when he hit the parked car, pushing it and driven to Wells St, Frankston, 30m into the shoulder of the road. He about 7.30pm on Tuesday, then travelled up on to the footpath September 15. Frankston Senior and through a 1m high brick fence at Constable Caroline McGill said a man 193 Beach St. Frankston Leading allegedly got out of the car carrying Senior Constable Barry Randall said it an electric guitar and used it to smash was lucky no one was injured in the the windscreens of two cars parked Swopping magpie: A common sight during spring as the birds patrol territory to crash. “There were no drugs or alcohol nearby. “We then received reports of protect their young. involved, and speeding was not a a robbery at the United Service factor,’’ “Fatigue maythe have Station in Davey St in Frankston single onehetosaid. ensure they’re real on scooters or small bicycles – the been a factor there will be about 7.45pm where a man gestured deal before thebut information is no posted magpie just seems to attack.” charges laid.’’ toThe the web attendant he had a gun in online. guru that has put together the his back pocket.’’ She said no weapon Any bad language about magpies at Magpie Alert site in his own spare was produced but the man stole food than such anCARRUM emotive DOWNS time for More the attacked time and a recent redesign has seen onand drinks from the store. He was 200 people visited Bunnings in is moderated by Mr Clark before com- line traffic soar with the use of Google intercepted by police a short time Carrum Downs to have special onements are uploaded making the site Maps to illustrate where attacks occur later in Carrum Downs. A Churchhill way screws fitted to their number family-friendly. and the29, ability to log in to the siteand using man, was arrested, charged plates in a bid to reduce plate thefts. The Magpie Alert shows there have Facebook and Twitter to spread mesremanded to appear at the Frankston Police invited the public to attend been magpie attacks that caused injury Magistrates’ Court sites. at a later date. Safepl8 day on Saturday, August 29, sages about attack inatMornington, Mt Eliza, Mt Martha, the Frankston-Dandenong Rd Mr Clark said he may design an app Somerville and Crib Point thisout year. hardware giant. Police handed the for smartphones FRANKSTON have Watch andPolice the Apple There have alsoFrankston been attacks screws while SESalong fittedthe released images of a man in future but “it depends how much Peninsula Linkcars. trailCarrum in Frankston. them to the Downs (pictured) they wish to speak to in time I get”. Mr Clark said statistics collated by Sergeant Sam Raso said the turnout relation to a one-punch attack See magpiealert.com to view magpie hiswas sitefantastic showed there have been 600the inand demonstrated outside Davey’s Nightclub which left a attack details. The sitejaw, is free to view juries nationwide this spring, accountneed to prevent crime in Frankston. man with a fractured eye socket and Those who find useful ing about 14 we percompletely cent of overall “It for went so well, ran anduse. nose. On Sunday, Julythe 12,site about can buy the beer orintwo” attacks. out of screws,’’ Sgt Raso said. “It was 1.50am, twodesigner men were“ainvolved a a voluntary donation section oninthe great to seewith people showing initiative verbal altercation outside the club “Anything wheels seems to be via when preventing crime. Davey St. The victim, a 33-year-old more ofita comes target to – cyclists, young kids site. We will definitely hold some more of Noble Park man, was then hit in the

Cash but no concrete plan for health hubs THE Labor state government has trumpeted $5 million in funding for three new health hubs in “Melbourne’s growth areas” including Frankston but has refused to reveal where the three hubs will be based. Carrum Downs A government announcement last Skye 2 to build three new week spruiked a plan health hubs butFrankston questions about how North much of the $5 million would flow to Seaford Frankston went unanswered. Frankston Labor MP PaulLangwarrin Edbrooke Karingal Frankston said “we’re not providing individual figures” and admitted “the other two 1 3 hubs] 4 are yet to be announced”. [health Frankston South No figures: Frankston Labor MP Paul The funding amount, when it is fiEdbrooke declined to provide funding nally confirmed, will be used “for planBaxter amount for new health hub. ning and options” rather than construction of a health hub in Frankston. bied the state government to help build Somerville The lack of a specific site for the a health hub away from Frankston train promised health hub did not stop station so drug and alcohol services are Health Minister Jill Hennessy being not based in central Frankston. Tyabb quoted in Labor’s media release as stat“Throughout our community consulMoorooduc ing “health hubs bring together a range tation for the $63 million redevelopHastings of health and community services unment of the transport precinct we were der one roof, ensuring services are made acutely aware of the issues surface by the better coordinated, more efficient, and rounding health care in Frankston,” Mr other man who more convenient for locals”. Edbrooke said. is described as The convenience or otherwise of the “We have taken our community’s being caucasian, Crib health hub will be apparent when a specase to the government and I am dePoint Bittern about 30 years old cific locationwith is confirmed. lighted the state government’s planning short brown Stony The state government noted services to build a health hub in our local area, hair, wearing a black Point provided at jumper, health hubs which will make a big difference to lokhakiinclude pants community healthand andcasual alliedshoes. health The services cal residents.” Sandy Point for people with chronic conditions The planning fees for a Frankston victim was taken to and pharmacies, drug and alcohol services, health hub will be added on top of Dandenong Hospital where he had and counselling mental health sersurgery to his face.and Anyone with existing train precinct funding if the information is urged to phone vices. health hub is located near the train staFrankston Police on 9784 or lobFrankston Council has5555 previous tion. Neil Walker Crime Stoppers.

“Thank you Choice Fresh Meals!” Jack and Mavis Kennedy, both 86, decided to try Choice Fresh Meals after Mavis had heard good reports from friends. “I belong to a seniors club and we began talking about meals one day and someone said they were using the company and we decided to give it a try. The main reason we did it was that if anything happens to me, Jack would struggle to carry on with preparing food. And the same goes for me if something happened to Jack. It’s a nice break from cooking every night and they have a large choice of meals…everyone has something they don’t like, so it is nice to have a good range to choose from. We have tried a few diferent services, but we are very happy with Choice Fresh Meals...It’s conveniently delivered to our home. They also now deliver fresh bread and milk.

Tired of cooking your own meals?

Join our many satisfed customers. If you want the goodness of home cooked meals delivered to your door, then Choice Fresh Meals, Victoria’s premier home delivery meal service, is the CHOICE for you. Our meals are prepared by 5 star chefs using only the best quality ingredients. Unlike frozen meals, all our meals are made fresh to order using the same care and attention as if you had made them at home yourself. • Diab tic fri ndly options, low salt, glut n fr , full di tary info • A choic of 80 main m als • Ord rs can b plac d by phon , mail, fax or with th driv r • Mouth wat ring d ss rts • Minimum ord r of only 3 m als