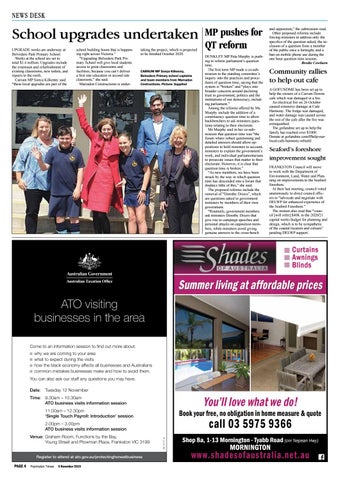 School upgrades undertaken UPGRADE works are underway at Belvedere Park Primary School. Works at the school are set to total $1.4 million. Upgrades include the extension and refurbishment of existing classrooms, new toilets, and repairs to the roofs. Carrum MP Sonya Kilkenny said “these local upgrades are part of the

school building boom that is happening right across Victoria.” “Upgrading Belvedere Park Primary School will give local students access to great classrooms and facilities, because you can’t deliver a first rate education in second rate classroom,” she said. Marradon Constructions is under-

taking the project, which is projected to be finished October 2020.

MP pushes for QT reform DUNKLEY MP Peta Murphy is pushing to reform parliament’s question time. The first term MP made a co-submission to the standing committee’s inquiry into the practices and procedures of question time, saying that the system is “broken” and “plays into broader concerns around declining trust in government, politics and the institutions of our democracy, including parliament.” Among the reforms offered by Ms Murphy include the addition of a constituency question time to allow backbenchers to ask ministers questions relating to their electorate. Ms Murphy said in her co-submission that question time was “the forum where robust questioning and detailed answers should allow oppositions to hold ministers to account, ministers to explain the government’s work, and individual parliamentarians to prosecute issues that matter to their electorate. However, it is clear that question time is broken.” “As new members, we have been struck by the way in which question time has descended into a forum that displays little of this,” she said. The proposed reforms include the removal of “Dorothy Dixers”, which are questions asked to government ministers by members of their own government. “Routinely, government members ask ministers Dorothy Dixers that give rise to campaign speeches and personal attacks on opposition members, while ministers avoid giving genuine answers to the cross-bench

and opposition,” the submission read. Other proposed reforms include forcing ministers to address only the specifics of the question asked, the inclusion of a question from a member of the public once a fortnight, and a ban on mobile phone use during the one hour question time session. Brodie Cowburn

Community rallies to help out cafe A GOFUNDME has been set up to help the owners of a Carrum Downs cafe which was damaged in a fire. An electrical fire on 26 October caused extensive damage at Cafe Harmony. The fridge was damaged, and water damage was caused across the rest of the cafe after the fire was extinguished. The gofundme set up to help the family has reached over $1000. Donate at gofundme.com/f/help-ourlocal-cafe-harmony-rebuild

Seaford’s foreshore improvement sought FRANKSTON Council will move to work with the Department of Environment, Land, Water and Planning on improvements to the Seaford foreshore. At their last meeting, council voted unanimously to direct council officers to “advocate and negotiate with DELWP for enhanced experience of the Seaford Foreshore.” The motion also read that “council [will refer] $40K to the 2020/21 capital works budget for planning and design, which is to be sympathetic of the coastal location and colours” pending DELWP support.

You’ll love what we do!

Book your free, no obligation in home measure &amp; quote