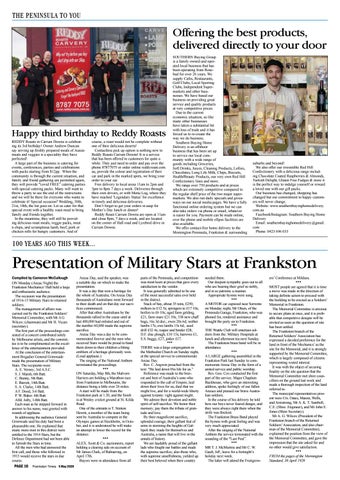 THE PENINSULA TO YOU

Offering the best products, delivered directly to your door

Happy third birthday to Reddy Roasts REDDY Roasts in Carrum Downs is celebrating its 3rd birthday! Owner Andrew Duncan say serving up freshly prepared meals of Aussie meats and veggies is a speciality they have perfected! A large part of the business is catering for events, conferences, parties and celebrations with packs starting from $12pp. When the community is through the current situation, and family and friend gathering are permitted again, they will provide “covid FREE” catering parties with special catering packs. Many will want to throw a party to see the end of the restrictions and we will be there for everyone who wants to celebrate it! Special occasion? Wedding, 50th, 21st, 18th, the list goes on. Let us cater for that special event with a healthy roast meal to bring family and friends together. In the meantime, they will still be providing delicious roast meals, veggie packs, meat n chips, and scrumptious lamb, beef, pork or chicken rolls for hungry customers. And of

course, a roast would not be complete without one of their delicious deserts! Contactless pick up option is nothing new to Reddy Roasts Carrum Downs! It is a service that has been offered to customers for quite a while. They just need to order and pay over the phone 87877075 or order online reddyroast.com. au, provide the colour and registration of their car and park in the marked spots, we bring your order to your car. Free delivery to local areas 11am to 2pm and 5pm to 8pm 7 days a week. Deliveries through their own drivers, or with Menu Log, where they have reached ‘Legendary Status’ for excellence in timely and delicious deliveries. Don’t forget to get your orders in asap for Mother’s Day lunch or dinner! Reddy Roast Carrum Downs are open at 11am and close 8pm, 7 days a week, and are located on the corner of Hall road and Lyrebird drive in Carrum Downs.

SOUTHERN Buying Group is a family owned and operated local business that has been operating from Rosebud for over 26 years. We supply Cafes, Restaurants, Golf Clubs, Local Sporting Clubs, Independent Supermarkets and other businesses. We have based our business on providing great service and quality products at very competitive prices. Due to the current economic situation, us like many other businesses have taken a substantial hit with loss of trade and it has forced us to re-create the way we do business. Southern Buying Home Delivery is an offshoot business that has been set up to service our local community with a wide range of goods including Groceries, Soft Drinks, Juices, Cleaning Products, Lollies, Chocolates, Long Life Milk, Chips, Biscuits, Health/Beauty Products, our very own Red Hill Confectionery lines and more. We range over 750 products and at prices which are extremely competitive compared to the regular shelf price of the two major supermarkets. We also run daily specials and giveaways on our social media pages. We have a fully functional online ordering system but we can also take orders via phone or email, whatever is easier for you. Payment can be made online, over the phone and mobile eftpos facilities are also available. We offer contact-free home delivery to the Mornington Peninsula, Frankston &amp; surrounding

suburbs and beyond! We also offer our irresistible Red Hill Confectionery with a delicious range including Chocolate Coated Raspberries &amp; Almonds, Turkish Delight, Gluten Free Fudges &amp; more it is the perfect way to indulge yourself or reward a loved one with our gift packs. Our business has changed, shopping has changed but our commitment to happy customers will never change. Website: www.southernbuyinghomedelivery. com.au Facebook/Instagram: Southern Buying Home Delivery Email: southernbuyinghomedelivery@gmail. com Phone: 0423 696 033

Presentation of Military Stars at Frankston Compiled by Cameron McCullough ON Monday (Anzac Night) the Frankston Mechanics’ Hall held a large and enthusiastic audience. The occasion was the presentation of 1914-15 Military Stars to returned soldiers. The management of affairs was carried out by the Frankston Soldiers’ Memorial Committee, with Mr A G Wilcox: (chairman) and Mr H. Vicars (secretary). The first part of the proceedings consisted of a concert contributed solely by Melbourne artists, and the committee is to be complimented on the excellence of the entertainment provided. At the conclusion of the entertainment Brigadier General Grimwade made the presentation of Military Stars. The recipients were: A. E. Verney; 3rd A.S.C. S. J. Marsh, 6th Batt. C. Bunny, 5th Batt. E. Barrett, 14th Batt. S. A. Clarke, 14th Batt. A F. Dood, 3-6 Batt. P. W. Baker. 6th Batt. Alfd. Jolly, 1-8th Batt. Each man as he stepped forward in answer to his name, was greeted with rounds of applause. In addressing the audience General Grimwade said his duty had been a pleasurable one. He explained that many more men in this district were entitled to the 1914 Stars, but the Defence Department had not been able to furnish the Stars in time. All the men who had answered the first call, and those who followed in 1915 would receive the stars in due course.

Anzac Day, said the speaker, was a suitable day on which to make the presentation. It was a day that won a heritage for the whole of Australia. On Anzac Day thousands of Australians went forward to their death and on that day our sacrifices commenced. After that other Australians by the thousands rallied to the cause until at last 400,000 had enlisted and out of the number 60,000 made the supreme sacrifice. Anzac Day was a day to be commemorated forever and the men who received Stars would be proud to hand them down to their children a fitting emblem of a heritage gloriously won. (Loud applause.) The singing of the National Anthem terminated the proceedings. *** ON Saturday, May 8th, the Malvern Harriers are holding a Marathon race from Frankston to Melbourne, the distance being a little over 26 miles. A start will be made from the Frankston park at 1.30, and the finish is at Wesley cricket ground at St. Kilda Road. One of the entrants is T. Stinton Hewitt, a member of the team being sent by Australia to compete in the Olympic games at Stockholm, in October, and it is understood he will make an attempt to lower the record for the distance. *** ALEX. Scott &amp; Co. auctioneers, report holding a clearing sale on account of Mr James Clark, of Balnarring, on April 17th. Buyers were in attendance from all

parts of the Peninsula, and competition was most keen at prices that gave every satisfaction to the vendor. It was generally admitted to be one of the most successful sales ever held in the district. Stack of hay, about 35 tons, £250; milkers to £12 5s; springers to £17 10s; heifers to £6 10s; aged farm gelding, £21; farm mare £21 10s; 538 new chaff bags, 16s 3d doz.; ewes 20s 6d; wether lambs 17s; ewe lambs 15s 6d; .seed drill £32 4s; reaper and binder £28; D.F. disc plough, £10 15s; harrows £1; S.S. buggy, £27; jinker £17. *** THERE was a large congregation in the Methodist Church on Sunday night, at the special service to commemorate Anzac Day. Rev. C. Angwin preached from the text: “He laid down His life for us.” Reference was made to the bravest and best of Australia’s sons who responded to the call of Empire, laid down their lives for us, died that we might live, and for a world-wide liberty against tyranny: right against might. We admire their devotion and noble spirit of self-sacrifice. We honor their memory; pay them the tribute of gratitude and love. By their magnificent sacrifice, splendid courage, their gallant feat of arms in storming the heights of Gallipoli they made for themselves and Australia, a name that will live in the annals of history. We are laudably proud of the gallant lads who fought our battles and made the supreme sacrifice; also those who, with supreme unselfishness, yielded up their best beloved when their country

needed them. Our deepest sympathy goes out to all who are bearing their grief so nobly, and in so patriotic a manner. Appropriate hymns were sung. *** A MOTOR car capsized near Sorrento on Monday night, Mr Olsen, of the Peninsula Garage, Frankston, who was phoned for, rendered assistance and brought the party on to Frankston. *** THE Wattle Club will entertain soldiers from the. Military Hospitals at lunch and afternoon tea next Sunday. The Frankston brass band will be in attendance. *** A LARGE gathering assembled in the Frankston Park last Sunday to commemorate Anzac Day in the form of a united service and public worship. Rev. Geo. Cox conducted the first part of the service. Major Chaplain Backhouse, who gave an interesting address, spoke feelingly of our fallen Anzacs and praised our brave Australian soldiers. In the course of his delivery he told how our boys never feared danger, and they were always right there when the strife was thickest. The Frankston Brass Band played the hymns with great feeling and was very much appreciated. After the singing of the National Anthem the service terminated with the sounding of the “Last Post”. *** MR T. J. McMurtrie and Mr C. W. Gault, JsP., leave for a fortnight’s holiday next week. The latter will attend the Fruitgrow-

ers’ Conference at Mildura. *** MOST people are agreed that it is time a move was made in the direction of taking definite action to proceed with the building to be erected as a Soldiers’ Memorial in Frankston. The Memorial Committee is anxious to secure plans at once, and it is probable that competitive designs will be invited as soon as the question of site has been settled. The Frankston branch of the Returned Soldiers’ Association has expressed a decided preference for the land in front of the Mechanics’ as the site for the Memorial, and it is strongly supported by the Memorial Committee, which is largely composed of citizens representing vested interest. It was with the object of securing finality on the site question that the Memorial Committee met shire councillors on the ground last week and made a thorough inspection of the land referred to. The municipal representatives present were Crs. Oates, Mason, Wells, and Armstrong, Mr A. K. T. Sambell, C.E. (Shire .Engineer), and Mr John E. Jones (Shire Secretary). Mr A. G. Wilcox (President of the Frankston branch of the Returned Soldiers’ Association, and also chairman of the Memorial Committee), explained the position from the view of the Memorial Committee, and gave the impression that the site asked for and no other would give satisfaction. *** FROM the pages of the Mornington Standard, 30 April 1920