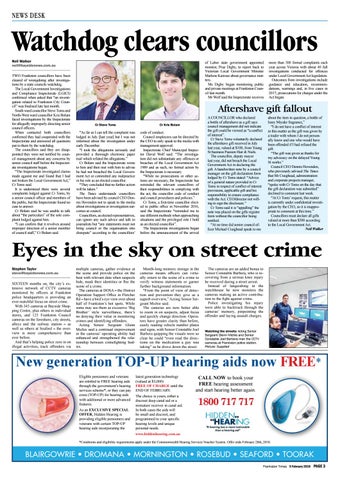 more than 500 formal complaints each year across Victoria with about 40 full investigations conducted for offences under Local Government Act legislation. Outcomes from investigations include guidance and education, recommendations, warnings and, in five cases in 2017, prosecutions for charges under the Act began.

“As far as I can tell the complaint was lodged in July [last year] but I was not informed about the investigation under early December. “I took the allegations seriously and provided a thorough electronic paper trail which refuted the allegations.” Cr Bolam said the Inspectorate wrote to him and then met with him to advise he had not breached the Local Government Act or committed any malpractice in his role as an elected councillor. “They concluded that no further action will be taken.” The Times understands councillors have been advised by council CEO Dennis Hovenden not to speak to the media about investigations or investigation outcomes at council. Councillors, as elected representatives, can ignore any such advice and talk to journalists but “any statements must not bring council or the organisation into disrepute” according to the councillors’

code of conduct. Council employees can be directed by the CEO to only speak to the media with management approval. Inspectorate Chief Municipal Inspector David Wolf said: “The investigation did not substantiate any offences or breaches of the Local Government Act 1989 and as such, no formal action by the Inspectorate is necessary. “While no prosecutions or other actions are necessary, the Inspectorate has reminded the relevant councillors of their responsibilities in complying with the act, the councillor code of conduct and council procedures and policies.” Cr Toms, a first-time councillor elected to public office in November 2016, said the Inspectorate “reminded me to use different methods when approaching situations and the privileged role I hold as an elected councillor”. The Inspectorate investigations began before the announcement of the arrival

about the item in question, a bottle of Issey Miyake fragrance,” “I do not have a conflict of interest in this matter as the gift was given by a trader with whom I do not personally know and one who would have been offended if I had refused the gift. “The gift was given as thanks for my advocacy on the delayed Young St works.” Council CEO Dennis Hovenden, who previously advised The Times that Mr Craighead, administration and corporate projects manager, “spoke with Cr Toms on the day that the gift declaration was submitted” declined to comment last week. “At Cr Toms’ request, this matter is currently under confidential investigation by the CEO, so it is inappropriate to comment at this time.” Councillors must declare all gifts valued at more than $500 according to the Local Government Act. Neil Walker

A COUNCILLOR who declared a bottle of aftershave as a gift says council management did not indicate the gift could be viewed as “a conflict of interest”. Cr Steve Toms voluntarily declared the aftershave gift received in July last year, valued at $100, from Young St business Passion Hair &amp; Nails. The councillor, deputy mayor last year, did not breach the Local Government Act in declaring the gift. A handwritten note by a council manager on the gift declaration form lodged by Cr Toms stated: “Advice of a general nature provided to Cr Toms in respect of conflict of interest provisions, applicable gift and his responsibility to ensure compliance with the Act. CEO/director not willing to sign the disclosure.” Cr Toms said it is “appalling” the note was placed on the gifts register form without the councillor being notified. “At no time did senior council officer Michael Craighead speak to me

Eyes in the sky on street crime Stephen Taylor steve@baysidenews.com.au SIXTEEN months on, the city’s extensive network of CCTV cameras monitored by officers at Frankston police headquarters is providing an ever-watchful focus on street crime. With 345 cameras at Bayside Shopping Centre, plus others in individual stores, and 125 Frankston Council cameras on the foreshore, city streets, alleys and the railway station – as well as others at Seaford – the overview is more comprehensive than ever before. And that’s helping police zero in on illegal activities, track offenders via

multiple cameras, gather evidence at the scene and provide police on the beat with relevant data when suspects hide, mask their identities or flee the scene of a crime. The cameras at DOSA – the District Operation Support Office in Fletcher Rd – have a bird’s eye view over about half of Frankston’s hot spots. While some may see them as excessive ‘Big Brother’ style surveillance, there’s no denying their value in monitoring crimes and identifying offenders. Acting Senior Sergeant Glenn Michie said a continual improvement in the cameras’ operating ability had enhanced and strengthened the relationship between crimefighting bodies.

Month-long memory storage in the cameras means officers can virtually return to the scene of a crime to verify witness statements or garner further background information. “From the point of view of detection and prevention they give us a superb overview,” Acting Senior Sergeant Michie said. The cameras are now better able to zoom in on suspects, adjust focus and quickly change direction. Operators have greater clarity than before, easily reading vehicle number plates and signs, with Senior Constable Joel Barbera quipping the visuals were so clear he could “even read the directions on the medication a guy was taking” as he drove down the street.

The cameras are an added bonus to Senior Constable Barbera, who is recovering from a serious knee injury he received during a street arrest. Instead of languishing in the watchhouse he now monitors the cameras making an active contribution to the fight against crime. Police investigating his injury were able to backtrack through the cameras’ memory, pinpointing the offender and laying assault charges.

latest generation technology (valued at $3,000) FREE OF CHARGE until the END OF FEBRUARY.