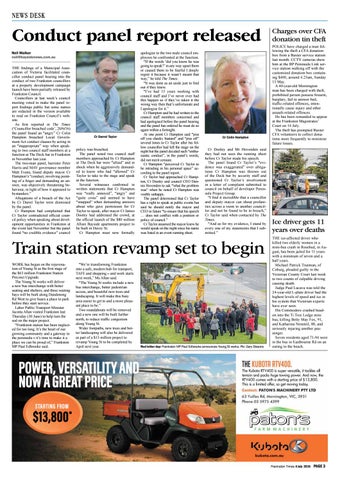 Conduct panel report released Neil Walker neil@baysidenews.com.au THE findings of a Municipal Association of Victoria facilitated councillor conduct panel hearing into the conduct of two Frankston councillors at a property development campaign launch have been partially released by Frankston Council. Councillors at last week’s council meeting voted to make the panel report findings public but some names are redacted in the version available to read on Frankston Council’s website. As first reported in The Times (‘Councillor breached code’, 20/6/16) the panel found an “angry” Cr Colin Hampton breached Local Government Act conduct clauses by acting in an “inappropriate” way when speaking to two council staff members at a function at The Deck bar in Frankston in November last year. The two-man panel, barrister Peter Harris and MAV governance member Matt Evans, found deputy mayor Cr Hampton’s “conduct, involving pointing of a finger and demanding an answer, was objectively threatening behaviour, in light of how it appeared to bystanders.” Allegations of a breach of the Act by Cr Darrel Taylor were dismissed by the panel. Cr Hampton had complained that Cr Taylor contradicted official council policy when speaking about development opportunities in Frankston at the event last November but the panel found “no credible evidence” council

policy was breached. The panel noted two council staff members approached by Cr Hampton at The Deck bar were “afraid” and in shock when he aggressively demanded to know who had “allowed” Cr Taylor to take to the stage and speak at the function. Several witnesses confirmed in written statements that Cr Hampton was “really annoyed”, “angry” and “quite cross” and seemed to have “snapped” when demanding answers about who gave permission for Cr Taylor to speak, after mayor Cr James Dooley had addressed the crowd, at the official launch of the $80 million Allure Bayside apartments project to be built in Davey St. Cr Hampton must now formally

apologise to the two male council employees he confronted at the function. “If the words ‘did you know he was going to speak?’ in any way upset them or caused them to be fearful I deeply regret it because it wasn’t meant that way,” he told The Times. “It was done as an aside just to find out if they knew. “I’ve had 15 years working with council staff and I’ve never ever had this happen so if they’ve taken it the wrong way then that’s unfortunate and I apologise for it.” Cr Hampton said he had written to the council staff members concerned and had apologised before the panel hearing and the panel has ordered he must do so again within a fortnight. At one point Cr Hampton said “piss off you cheeky bastard” and “piss off” several times to Cr Taylor after his fellow councillor had left the stage on the night but the panel decided such “enthusiastic conduct”, in the panel’s words, did not merit censure. Cr Hampton “perceived Cr Taylor to be intruding in his personal space” according to the panel report. Cr Taylor had approached Cr Hampton, Cr Dooley and council CEO Dennis Hovenden to ask “what the problem was” when he noted Cr Hampton was visibly unhappy. The panel determined that Cr Taylor has a right to speak at public events but said he should notify the mayor and CEO in future “to ensure that his speech … does not conflict with a position or policy of council.” Cr Taylor assumed the mayor knew he would speak on the night since his name was listed in an event running sheet.

Cr Dooley and Mr Hovenden said they had not seen the running sheet before Cr Taylor made his speech. The panel found Cr Taylor’s “evidence was exaggerated” over allegations Cr Hampton was thrown out of the Deck bar by security staff and questioned Cr Taylor’s involvement in a letter of complaint submitted to council on behalf of developer Peninsula Project Group. “I find it incredible that a councillor and deputy mayor can shout profanities across a room to another councillor and not be found to be in breach,” Cr Taylor said when contacted by The Times. “And as for my evidence, I stand by every one of my statements that I submitted.”

Train station revamp set to begin WORK has begun on the rejuvenation of Young St as the first stage of the $63 million Frankston Station Precinct Upgrade. The Young St works will deliver a new bus interchange with better seating and shelters, and three waiting bays will be built along Dandenong Rd West to give buses a place to park before they start service. Labor Public Transport Minister Jacinta Allan visited Frankston last Thursday (30 June) to help turn the sod on the major project. “Frankston station has been neglected for too long. It’s the heart of our growing community and a gateway to the peninsula – it’s time to make it a place we can be proud of,” Frankston MP Paul Edbrooke said.

“We’re transforming Frankston into a safe, modern hub for transport, TAFE and shopping – and work starts next week,” Ms Allan said. “The Young St works include a new bus interchange, better pedestrian access, and beautiful new trees and landscaping. It will make this busy area easier to get to and a more pleasant place to be.” Two roundabouts will be removed and a new one will be built further north, to reduce traffic congestion along Young St. Wider footpaths, new trees and better landscaping will also be delivered as part of a $13 million project to revamp Young St to be completed by April next year.

Charges over CFA donation tin theft POLICE have charged a man following the theft a CFA donation box from a Baxter service station last month. CCTV cameras show him at the BP Peninsula Link service station walking off with the customised donation box containing $400, around 4.25am, Sunday 15 May. A 40-year-old Mornington man has been charged with theft, prohibited person possess firearm, burglary, fail to answer bail, traffic-related offences, intentionally cause injury and other assault-related offences. He has been remanded to appear at the Frankston Magistrates’ Court on 14 July. The theft has prompted Baxter CFA volunteers to collect donations more frequently to minimise future losses.

Ice driver gets 11 years over deaths THE ice-affected driver who killed two elderly women in a mini-bus crash in Rosebud, in August, has been jailed for 11 years with a minimum of seven and a half years. Michael Patrick Trueman, of Coburg, pleaded guilty in the Victorian County Court last week to two counts of culpable driving causing death. Judge Paul Lacava was told the 24-year-old L-plate driver had the highest levels of speed and ice in his system that Victorian experts have ever seen. His Commodore crashed headon into the Ti Tree Lodge mini bus, killing Betty May Fox, 91, and Katharina Nensteil, 88, and seriously injuring another passenger. Seven residents aged 71-94 were in the bus in Eastbourne Rd on an outing to the beach.

The Kubota RTV400 is super versatile, it tackles all terrain and packs huge towing power. And now, the RTV400 comes with a starting price of $13,800. This is a limited offer, so get moving today.