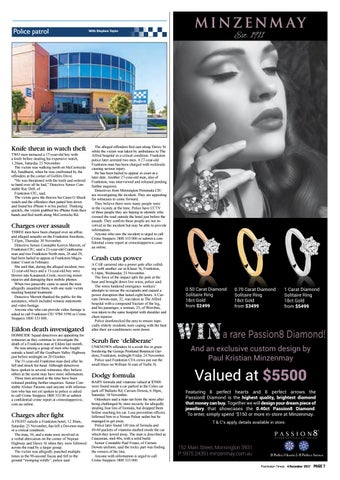 TWO men menaced a 17-year-old boy with a knife before stealing his expensive watch, 1.20am, Saturday 25 November. The victim was walking north on McCormicks Rd, Sandhurst, when he was confronted by the offenders at the corner of Golfers Drive. “He was threatened with the knife and ordered to hand over all he had,” Detective Senior Constable Ray Dell, of Frankston CIU, said. The victim gave the thieves his Casio G Shock watch and the offenders then patted him down and found his iPhone 6 in his pocket. Thinking quickly, the victim grabbed his iPhone from their hands and fled north along McCormicks Rd.

Charges over assault THREE men have been charged over an affray and alleged assaults on the Frankston foreshore, 7.45pm, Thursday 30 November. Detective Senior Constable Kerryn Merrett, of Frankston CIU, said a 21-year-old Cranbourne man and two Frankston North men, 26 and 29, had been bailed to appear at Frankston Magistrates’ Court in February. She said that, during the alleged incident, two 12-year-old boys and a 13-year-old boy were thrown into Kananook Creek, receiving minor injuries and damaging their mobile phones. When two passersby came to assist the men allegedly assaulted them, with one male victim needing hospital treatment. Detective Merrett thanked the public for the assistance, which included witness statements and video footage. Anyone else who can provide video footage is asked to call Frankston CIU 9784 5590 or Crime Stoppers 1800 333 000.

HOMICIDE Squad detectives are appealing for witnesses as they continue to investigate the death of a Frankston man at Eildon last month. He was among a group of men who fought outside a hotel off the Goulburn Valley Highway just before midnight on 20 October. The 51-year-old Frankston man died after he fell and struck his head. Although detectives have spoken to several witnesses, they believe others at the scene may have more information. Three men arrested at the time have been released pending further enquiries. Senior Constable Alistair Parsons said anyone with information who has not yet spoken to police is asked to call Crime Stoppers 1800 333 00 or submit a confidential crime report at crimestoppersvic. com.au online.

Charges after fight A FIGHT outside a Frankston hotel, 12.30am, Saturday 25 November, has left a Doveton man in a critical condition. The man, 34, and a mate were involved in a verbal altercation on the corner of Nepean Highway and Davey St when they were followed across the road by a larger group. The victim was allegedly punched multiple times in the 90-second fracas and fell to the ground “swinging wildly”, police said.

The alleged offenders fled east along Davey St while the victim was taken by ambulance to The Alfred hospital in a critical condition. Frankston police later arrested two men. A 27-year-old Frankston man has been charged with recklessly causing serious injury. He has been bailed to appear in court at a later date. Another 27-year-old man, also of Frankston, was interviewed and released pending further inquiries. Detectives from Mornington Peninsula CIU are investigating the incident. They are appealing for witnesses to come forward. They believe there were many people were in the vicinity at the time. Police have CCTV of three people they are hoping to identify who crossed the road outside the hotel just before the assault. They confirm these people are not involved in the incident but may be able to provide information. Anyone who saw the incident is urged to call Crime Stoppers 1800 333 000 or submit a confidential crime report at crimestoppersvic.com. au online.

A CAR careered into a power pole after colliding with another car in Klauer St, Frankston, 6.14pm, Wednesday 23 November. The force of the impact split the pole at the base and brought down live wires, police said. The wires hindered emergency workers’ attempts to rescue the occupants and caused a power disruption that lasted eight hours. A Carrum Downs man, 32, was taken to The Alfred hospital with a compound fracture of the leg, and his passenger, a woman, 23, of Werribee, was taken to the same hospital with shoulder and chest injuries. Police doorknocked the area to ensure especially elderly residents were coping with the heat after their air-conditioners went down.

Dodgy formula BABY formula and vitamins valued at $7000 were found inside a car parked in the Coles car park off Ballarto Rd, Carrum Downs, 6.30pm, Saturday 18 November. Onlookers said a man ran from the store after being challenged by store security for allegedly stealing four tins of formula, but dropped them before reaching his car. Loss prevention officers followed him to a Nissan Pulsar sedan but he managed to get away. Police later found 140 tins of formula and 40-60 packets of vitamins stashed inside the car which they towed away. The man is described as Caucasian, mid-40s, with a solid build. Senior Constable Paul Fraser, of Carrum Downs uniform, said the tricky part was finding the owners of the tins. Anyone with information is urged to call Crime Stoppers 1800 333 000. Frankston Times 4 December 2017