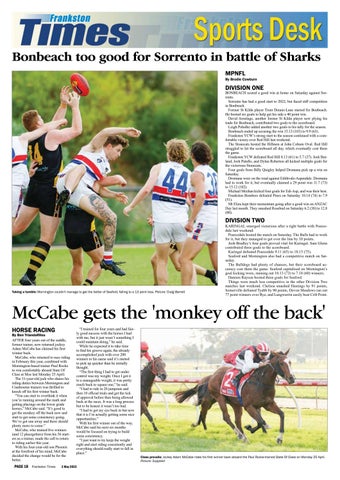 Bonbeach too good for Sorrento in battle of Sharks MPNFL

BONBEACH scored a good win at home on Saturday against Sorrento. Sorrento has had a good start to 2022, but faced stiff competition in Bonbeach. Former St Kilda player Trent Dennis-Lane starred for Bonbeach. He booted six goals to help get his side a 40 point win. David Armitage, another former St Kilda player now plying his trade for Bonbeach, contributed two goals to the scoreboard. Leigh Poholke added another two goals to his tally for the season. Bonbeach ended up securing the win 15.13 (103) to 9.9 (63). Frankston YCW’s strong start to the season continued with a comfortable victory over Red Hill last weekend. The Stonecats hosted the Hillmen at John Coburn Oval. Red Hill struggled to hit the scoreboard all day, which eventually cost them the game. Frankston YCW defeated Red Hill 8.13 (61) to 5.7 (37). Josh Butland, Josh Patullo, and Dylan Roberton all kicked multiple goals for the victorious Stonecats. Four goals from Billy Quigley helped Dromana pick up a win on Saturday. Dromana were on the road against Edithvale-Aspendale. Dromana had to work for it, but eventually claimed a 29 point win 11.7 (73) to 15.12 (102). Michael Meehan kicked four goals for Edi-Asp, and was their best. Frankston Bombers defeated Pines on Saturday 10.14 (74) to 7.9 (51). Mt Eliza kept their momentum going after a good win on ANZAC Day last month. They smashed Rosebud on Saturday 6.2 (38) to 12.8 (80).

Taking a tumble: Mornington couldn&#39;t manage to get the better of Seaford, falling to a 13 point loss. Picture: Craig Barrett

KARINGAL emerged victorious after a tight battle with Pearcedale last weekend. Pearcedale hosted the match on Saturday. The Bulls had to work for it, but they managed to get over the line by 10 points. Josh Bradley’s four goals proved vital for Karingal. Sam Glenn contributed three goals to the scoreboard. Karingal defeated Pearcedale 9.11 (65) to 10.15 (75). Seaford and Mornington also had a competitive match on Saturday. The Bulldogs had plenty of chances, but their scoreboard accuracy cost them the game. Seaford capitalised on Mornington’s goal kicking woes, running out 10.13 (73) to 7.18 (60) winners. Damien Rayson booted three goals for Seaford. Things were much less competitive in the other Division Two matches last weekend. Chelsea smashed Hastings by 91 points, Somerville defeated Tyabb by 90 points, Devon Meadows ran out 77 point winners over Rye, and Langwarrin easily beat Crib Point.

By Ben Triandafillou AFTER four years out of the saddle, former trainer, now returned jockey Adam McCabe has claimed his first winner back. McCabe, who returned to race riding in February this year, combined with Mornington-based trainer Paul Rocke to win comfortably aboard State Of Class at Moe last Monday 25 April. The 31-year-old jock who shares his riding duties between Mornington and Cranbourne trainers was thrilled to knock off his first winner back. “You can start to overthink it when you’re running around the mark and getting placings on the lower grade horses,” McCabe said. “It’s good to get the monkey off the back now and start to get some consistency going. We’ve got one away and there should plenty more to come.” McCabe, who trained five winners (and 12 placegetters) from his 56 starters as a trainer, made the call to return to riding earlier this year. With his four-year-old son Phoenix at the forefront of his mind, McCabe decided the change would be for the better.

“I trained for four years and had fairly good success with the horses I had with me, but it just wasn’t something I could maintain doing,” he said. While he expected it to take time to find his groove again, the already accomplished jock with over 200 winners to his name said it’s started to pick up quicker than he initially thought. “The first thing I had to get under control was my weight. Once I got it to a manageable weight, it was pretty much back to square one,” he said. “I had to ride in 20 jumpouts and then 10 official trials and get the tick of approval before then being allowed back at the races. It was a long process but to be honest it wasn’t too bad. “I had to get my eye back in but now that it is I’m actually getting some nice opportunities.” With his first winner out of the way, McCabe said his next six months would be focused on trying to build some consistency. “I just want to try keep the weight right and start riding consistently and everything should really start to fall in place.”