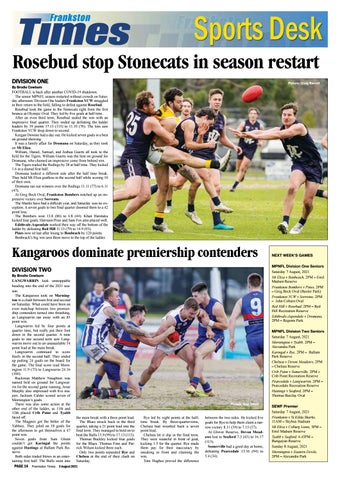 By Brodie Cowburn FOOTBALL is back after another COVID-19 shutdown. The senior MPNFL season restarted without crowds on Saturday afternoon. Division One leaders Frankston YCW struggled in their return to the field, falling to defeat against Rosebud. Rosebud took the game to the Stonecats right from the first bounce at Olympic Oval. They led by five goals at half time. After an even third term, Rosebud sealed the win with an impressive final quarter. They ended up defeating the ladder leaders by 39 points 17.13 (115) to 11.10 (76). The loss saw Frankston YCW drop down to second. Keegan Downie had a day out. He kicked seven goals in a best on ground showing. It was a family affair for Dromana on Saturday, as they took on Mt Eliza. William, Daniel, Samuel, and Joshua Guerts all took to the field for the Tigers. William Guerts was the best on ground for Dromana, who claimed an impressive come from behind win. The Tigers trailed the Redlegs by 28 at half time. They kicked 1.6 in a dismal first half. Dromana looked a different side after the half time break. They held Mt Eliza goalless in the second half while scoring 10 of their own. Dromana ran out winners over the Redlegs 11.11 (77) to 6.11 (47). At Greg Beck Oval, Frankston Bombers notched up an impressive victory over Sorrento. The Sharks have had a difficult year, and Saturday was no exception. A seven goals to two final quarter doomed them to a 42 point loss. The Bombers won 13.8 (86) to 6.8 (44). Khan Haretuku kicked four goals. Harrison Prior and Sam Fox also played well. Edithvale-Aspendale worked their way off the bottom of the ladder by defeating Red Hill 11.13 (79) to 14.9 (93). Pines now sit last after losing to Bonbeach by 120 points. Bonbeach’s big win sees them move to the top of the ladder.

By Brodie Cowburn LANGWARRIN look unstoppable heading into the end of the 2021 season. The Kangaroos took on Mornington in a clash between first and second on Saturday. What could have been an even matchup between two premiership contenders turned into thrashing, as Langwarrin ran away with an 85 point win. Langwarrin led by four points at quarter time, but really put their foot down in the second quarter. A nine goals to one second term saw Langwarrin move out to an unassailable 54 point lead at the main break. Langwarrin continued to score freely in the second half. They ended up putting 24 goals on the board for the game. The final score read Mornington 11.9 (75) to Langwarrin 24.16 (160). Ruckman Matthew Naughton was named best on ground for Langwarrin for the second game running. Jesse Murphy also impressed with five majors. Jackson Calder scored seven of Mornington’s goals. There was also some action at the other end of the ladder, as 11th and 12th placed Crib Point and Tyabb faced off. The Magpies got the better of the Yabbies. They piled on 18 goals for the afternoon to get themselves a 47 point win. Seven goals from Sam Glenn couldn’t get Karingal the points against Hastings at Ballam Park Reserve. Both sides traded blows in an entertaining first half. The Bulls went into

the main break with a three point lead. The Blues struck back in the third quarter, taking a 21 point lead into the final term. They managed to hold on to beat the Bulls 15.9 (99) to 17.13 (115). Thomas Buckley kicked four goals for the Blues. Thomas Finn and Patrick Wilson kicked three each. Only two points separated Rye and Chelsea at the end of their clash on Saturday.

Rye led by eight points at the halftime break. By three-quarter-time, Chelsea had wrestled back a seven point lead. Chelsea let it slip in the final term. They were wasteful in front of goal, kicking 1.5 for the quarter. Rye made them pay for their inaccuracy by sneaking in front and claiming the win. Tom Hughes proved the difference