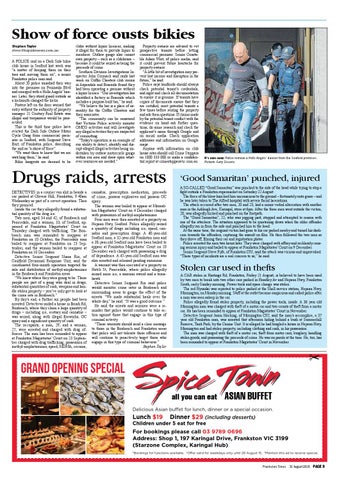 Show of force ousts bikies Stephen Taylor steve@baysidenews.com.au A POLICE raid on a Dark Side bikie club house in Seaford last week was “a matter of keeping them on their toes and moving them on”, a senior Frankston police man said. About 20 police smashed their way into the premises on Peninsula Blvd and emerged with a Hells Angels’ banner. Later, they stood guard outside as a locksmith changed the locks. Posters left on the door warned that entry without the authority of property manager 21 Century Real Estate was illegal and trespassers would be prosecuted. This is the third time police have evicted the Dark Side Outlaw Motor Cycle Gang from commercial premises in Seaford, with Sergeant Steve Burt, of Frankston police, describing the raid as “a show of force”. “We want them to know that we are watching them,” he said. Bikie hangouts are deemed to be

clubs without liquor licences, making it illegal for them to provide liquor to members. Outlaw gangs also cannot own property – such as a clubhouse – because it could be seized as being the proceeds of crime. Southern Division Investigations Inspector John Cormack said raids last week on Coffin Cheaters club rooms in Aspendale and Braeside found they had been operating a premise without a liquor licence. “Our investigation has identified a factory in Braeside which includes a purpose-built bar,” he said. “We believe the bar is a place of assembly for the Coffin Cheaters and their associates. “The community can be reassured that Victoria Police actively monitor OMCG activities and will investigate any illegal activities they are suspected of committing. “Today’s operation is an example of our ability to detect, identify and disrupt alleged illegal activities being undertaken by outlaw motorcycle gangs within our area and draw upon whatever resources are needed.”

Property owners are advised to vet prospective tenants before letting commercial premises. Senior Constable Adam West, of police media, said it could prevent future heartache for property owners. “A little bit of investigation may prevent lost income and disruption in the future,” he said. Police says landlords should always check potential tenant’s credentials, and sight and check all documentation to ensure it is genuine. If tenants have copies of documents ensure that they are certified, meet potential tenants a few times before renting the property and ask them questions. If claims made by the potential tenant conflict with the evidence on hand ask further questions, do some research and check the applicant’s name through Google and on social media. Check application addresses and information on Google maps. Anyone with information on club house sites should call Crime Stoppers on 1800 333 000 or make a confidential report at crimestoppersvic.com.au

Drugs raids, arrests DETECTIVES in a courier van slid in beside a car parked at Olivers Hill, Frankston, 9.40am Wednesday as part of a covert operation. Then they pounced. Inside the car they allegedly found a substantial quantity of the drug ice. Two men, aged 34 and 42, of Bonbeach and Pearcedale, and a woman, 33, of Seaford, appeared at Frankston Magistrates’ Court on Thursday charged with trafficking. The Bonbeach man was remanded to reappear at Frankston on 10 October, the Pearcedale man bailed to reappear at Frankston on 23 September, and the woman bailed to reappear at Frankston on 10 December. Detective Senior Sergeant Shane Rix, of Caulfield Divisional Response Unit, said the coordinated four-month operation targeted the sale and distribution of methyl-amphetamines in the Bonbeach and Frankston areas. “We knew where they were going to be. These people are part of a gang who deal in drugs, substantial quantities of cash, weapons and handle stolen property – you’ve only got to look at the crime rate in Bonbeach.” By day’s end, a further six people had been arrested. Detectives raided a house in Bondi Rd, Bonbeach, where they claim a large quantity of drugs – including ice, ecstasy and cannabis – was seized, along with illegal fireworks, OC spray and a significant quantity of cash. The occupants, a man, 29, and a woman, 25, were arrested and charged with drug offences. The man has been remanded to appear at Frankston Magistrates’ Court on 23 September charged with drug trafficking, possession of methyl-amphetamines, speed, MDMA, cocaine,

cannabis, prescription medication, proceeds of crime, possess explosives and possess OC spray. The woman was bailed to appear at Moorabbin Magistrates’ Court on 4 December charged with possession of methyl-amphetamines. Four men were then arrested at a property on Nepean Hwy, Seaford. Police allegedly seized a quantity of drugs including ice, speed, cannabis and prescription drugs. A 40-year-old Seaford man, a 32-year-old Frankston man and a 38-year-old Seaford man have been bailed to appear at Frankston Magistrates’ Court on 10 December each charged with possessing a drug of dependence. A 45-year-old Seaford man was also arrested and released pending summons. A warrant was then executed at a property on Hatch St, Pearcedale, where police allegedly seized more ice, a samurai sword and a tomahawk. Detective Senior Sergeant Rix said police would monitor crime rates in Bonbeach and surrounding areas to gauge the effect of the arrests. “We made substantial hauls over the whole day,” he said. “It was a good outcome.” He said the arrests and seizures were a reminder that police would continue to take action against those that engage in this type of criminal activity. “These warrants should send a clear message to those in the Bonbeach and Frankston areas that police will not tolerate these offences and will continue to proactively target those who engage in this type of criminal behaviour.” Stephen Taylor

‘Good Samaritan’ punched, injured A SO-CALLED “Good Samaritan” was punched to the side of the head while trying to stop a fight outside a Frankston supermarket on Saturday 22 August. The force of the blow knocked him unconscious to the ground – fortunately onto grass – and he was later taken to The Alfred hospital with severe facial lacerations. The attack occurred after two men, 20 and 23, had a minor verbal altercation with another man in the Ashleigh Ave, Karingal, store at 6pm. After the three men went outside the victim, 20, was allegedly kicked and punched on the footpath. The “Good Samaritan”, 22, who was jogging past, stopped and attempted to reason with one of the attackers. The situation appeared to be quietening down when the older offender allegedly ran in from the side and punched him to the head. At the same time, the original victim had gone to his car parked nearby and turned his dashcam towards the offenders, capturing the assault on film. He then followed the two men as they drove off, filming their car and registration plates. Police arrested the men two hours later. They were charged with affray and recklessly causing serious injury and bailed to appear at Frankston Magistrates’ Court on 9 December. Senior Sergeant Steve Fyfe, of Frankston CIU, said the attack was vicious and unprovoked. “These types of incidents are a real concern to us,” he said.

GRAND OPENING SPECIAL all you can eat

Delicious Asian buffet for lunch, dinner or a special occasion.

Children under 5 eat for free