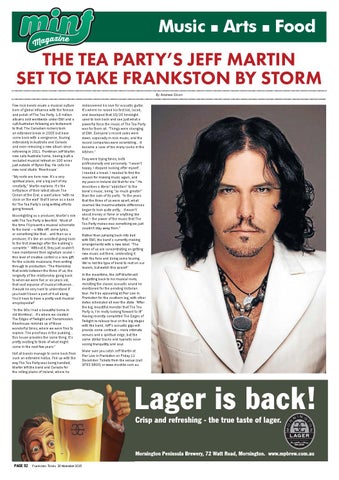 THE TEA PARTY’S JEFF MARTIN SET TO TAKE FRANKSTON BY STORM By Andrew Dixon Few rock bands exude a musical culture born of global influence with the finesse and polish of The Tea Party. 1.6 million albums sold worldwide under EMI and a cult Australian following are testament to that. The Canadian rockers took an extended break in 2005 but have come back with a vengeance, touring extensively in Australia and Canada and even releasing a new album since reforming in 2011. Frontman Jeff Martin now calls Australia home, having built a secluded musical retreat on 100 acres just outside of Byron Bay. He calls his new rural studio ‘Riverhouse’. “My roots are here now. It’s a very spiritual place, and a big part of my creativity,” Martin explains. It’s the birthplace of their latest album The Ocean at the End; a quiet place “with no clock on the wall” that’ll serve as a base for The Tea Party’s song writing efforts going forward. Moonlighting as a producer, Martin’s role with The Tea Party is two-fold. “Most of the time I’ll present a musical schematic to the band – a little riff, some lyrics, or something like that… and then as a producer, it’s like an architect going back to the first drawings after the building’s complete.” Without it, they just couldn’t have maintained their signature sound – this level of creative control is a rare gift for the eclectic musicians, from writing through to production. “The friendship that exists between the three of us, the longevity of the relationship going back to when we were five or six years old, that vast expanse of musical influence… it would be very hard to understand if you hadn’t been a part of it all along. You’d have to have a pretty vast musical encyclopedia!” “In the 90s I had a beautiful home in old Montreal… it’s where we created The Edges of Twilight and Transmission. Riverhouse reminds us of those wonderful times, where we were free to explore. The proof was in the pudding… this house provides the same thing. It’s pretty exciting to think of what might come in the next few years.”

They were trying times, both professionally and personally. “I wasn’t happy, I stopped looking after myself… I needed a break. I needed to find the reason for making music again, and my years in Ireland did that for me.” He describes a literal “addiction” to the band’s music, being “so much greater” than the sum of its parts. “In the years that the three of us were apart, what seemed like insurmountable differences began to look quite petty… it wasn’t about money or fame or anything like that – the power of the music that The Tea Party makes was something we just couldn’t stay away from.” Rather than jumping back into bed with EMI, the band’s currently making arrangements with a new label. “The three of us are concentrating on getting new music out there, celebrating it with the fans and doing some touring. We’re not the type of band to rest on our laurels, but watch this space!” In the meantime, the Jeff Martin will be getting back to his musical roots, revisiting the classic acoustic sound he mentioned for the pending Victorian tour. He’ll be appearing at Pier Live in Frankston for the southern leg, with other dates scheduled all over the state. “After the big, beautiful monster that The Tea Party is, I’m really looking forward to it!” Having recently completed The Edges of Twilight re-release tour on the big stages with the band, Jeff’s acoustic gigs will provide some contrast – more intimate venues and a spiritual edge, but the same stellar tracks and hypnotic voice oozing tranquillity and soul. Make sure you catch Jeff Martin at Pier Live in Frankston on Friday 11 December. Tickets from the venue (call 9783 9800) or www.moshtix.com.au

Not all bands manage to come back from such an extended hiatus. Fed up with the way The Tea Party was being handled, Martin left the band and Canada for the rolling plains of Ireland, where he

rediscovered his love for acoustic guitar. It’s where he raised his first kid, Jacob, and developed that 20/20 hindsight used to look back and see just what a powerful force the music of The Tea Party was for them all. “Things were changing at EMI. Everyone’s record sales were down, especially in rock music, and the record companies were scrambling… it became a case of too many cooks in the kitchen.”

lager NO ADDITIVES. NO PRESERVATIVES.