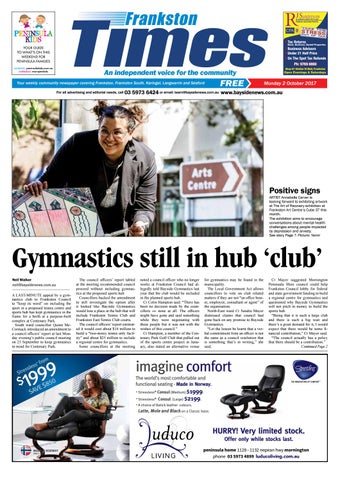 Gymnastics still in hub ‘club’ Neil Walker neil@baysidenews.com.au A LAST-MINUTE appeal by a gymnastics club to Frankston Council to “keep its word” on including the sport in a proposed tennis centre and sports hub has kept gymnastics in the frame for a berth at a purpose-built complex at Centenary Park. South ward councillor Quinn McCormack introduced an amendment to a council officers’ report at last Monday evening’s public council meeting on 25 September to keep gymnastics in mind for Centenary Park.

The council officers’ report tabled at the meeting recommended council proceed without including gymnastics at the proposed sports hub. Councillors backed the amendment to still investigate the option after it looked like Bayside Gymnastics would lose a place at the hub that will include Frankston Tennis Club and Frankston East Tennis Club courts. The council officers’ report estimated it would cost about $14 million to build a “two-storey tennis only facility” and about $25 million to include a regional centre for gymnastics. Some councillors at the meeting

noted a council officer who no longer works at Frankston Council had allegedly told Bayside Gymnastics last year that the club would be included in the planned sports hub. Cr Colin Hampton said: “There has been no decision made by the councillors — none at all. The officers might have gone and said something while they were negotiating with these people but it was not with the wishes of this council.” Cr Hampton, a member of the Centenary Park Golf Club that pulled out of the sports centre project in January, also stated an alternative venue

for gymnastics may be found in the municipality. The Local Government Act allows councillors to vote on club related matters if they are not “an office bearer, employee, consultant or agent” of the organisation. North-East ward Cr Sandra Mayer dismissed claims that council had gone back on any promise to Bayside Gymnastics. “Let the lesson be learnt that a verbal commitment from an officer is not the same as a council resolution that is something that’s in writing,” she said.

Cr Mayer suggested Mornington Peninsula Shire council could help Frankston Council lobby for federal and state government funding to build a regional centre for gymnastics and questioned why Bayside Gymnastics will not pitch in money to build the sports hub. “Being that it is such a large club and there is such a big wait and there’s a great demand for it, I would expect that there would be some financial contribution,” Cr Mayer said. “The council actually has a policy that there should be a contribution.” Continued Page 2

imagine comfort The world’s most comfortable and functional seating - Made in Norway. • Stressless® • Stressless •A

Latte, Mole and Black on a Classic base.

HURRY! Very limited stock. Offer only while stocks last. MADE IN NORWAY SINCE 1934