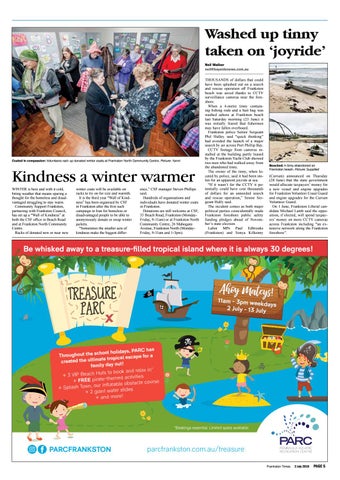 Kindness a winter warmer WINTER is here and with it cold, biting weather that means sparing a thought for the homeless and disadvantaged struggling to stay warm. Community Support Frankston, partnering with Frankston Council, has set up a “Wall of Kindness” at both the CSF office in Beach Road and at Frankston North Community Centre. Racks of donated new or near new

winter coats will be available on racks to try on for size and warmth. It is the third year “Wall of Kindness” has been organised by CSF in Frankston after the first such campaign in Iran for homeless or disadvantaged people to be able to anonymously donate or swap winter jackets. “Sometimes the smaller acts of kindness make the biggest differ-

THOUSANDS of dollars that could have been splashed out on a search and rescue operation off Frankston beach was saved thanks to CCTV surveillance cameras near the foreshore. When a 4-metre tinny containing fishing rods and a bait bag was washed ashore at Frankston beach last Saturday morning (23 June) it was initially feared that fishermen may have fallen overboard. Frankston police Senior Sergeant Phil Hulley said “quick thinking” had avoided the launch of a major search by air across Port Phillip Bay. CCTV footage from cameras installed at the building partly leased by the Frankston Yacht Club showed two men who had walked away from the abandoned tinny. The owner of the tinny, when located by police, said it had been stolen for an apparent joyride at sea. “If it wasn’t for the CCTV it potentially could have cost thousands of dollars for an unneeded search and rescue operation,” Senior Sergeant Hully said. The incident comes as both major political parties coincidentally made Frankston foreshore public safety funding pledges ahead of November’s state election. Labor MPs Paul Edbrooke (Frankston) and Sonya Kilkenny

(Carrum) announced on Thursday (28 June) that the state government would allocate taxpayers’ money for a new vessel and engine upgrades for Frankston Volunteer Coast Guard and engine upgrades for the Carrum Volunteer Guard. On 1 June, Frankston Liberal candidate Michael Lamb said the opposition, if elected, will spend taxpayers’ money on more CCTV cameras across Frankston including “an extensive network along the Frankston foreshore”.

Be whisked away to a treasure-filled tropical island where it is always 30 degrees!