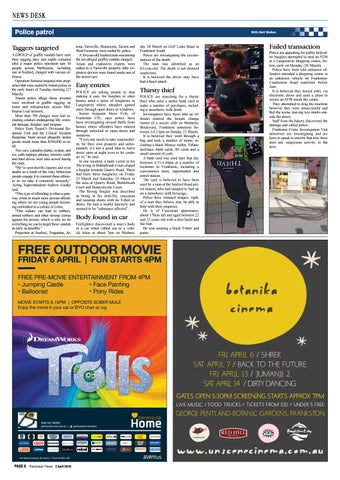 NEWS DESK Police patrol Taggers targeted A GROUP of graffiti vandals have seen their tagging days and nights curtailed after a major police operation saw 10 people across Melbourne, including one in Seaford, charged with various offences. Operation Samurai targeted nine properties that were raided by transit police in the early hours of Tuesday morning (27 March). Transit police allege those arrested were involved in graffiti tagging on trains and infrastructure across Melbourne’s rail network. More than 700 charges were laid including conduct endangering life, criminal damage, burglary and trespass. Police from Transit’s Divisional Response Unit and the Critical Incident Response Team seized allegedly stolen goods worth more than $100,000 in total. Two cars, cannabis plants, ecstasy and ice, cash, laptops, phones, memory cards and hard drives were also seized during the raids. “We’ve seen horrific injuries and even deaths as a result of the risky behaviour people engage it to commit these offences so we take it extremely seriously,” Acting Superintendent Andrew Gustke said. “This type of offending is often a gateway crime to much more serious offending where we see young people becoming embedded in a culture of crime. “This culture can lead to robbery, armed robbery and other serious crimes against the person, which is why we do everything we can to target these vandals as early as possible.” Properties at Seaford, Truganina, Al-

tona, Yarraville, Brunswick, Tarneit and West Footscray were raided by police. A 30-year-old Seaford man was among the ten alleged graffiti vandals charged. Arson and explosives experts were called to a Yarraville property after explosive devices were found inside one of the seized cars.

Easy entries POLICE are asking people to stop making it easy for burglars to enter homes amid a spree of burglaries in Langwarrin where intruders gained entry through open doors or windows. Senior Sergeant Steve Fyfe, of Frankston CIU, says police have been investigating several thefts from homes where offenders have entered through unlocked or open doors and windows. “Everyone needs to take responsibility for their own property and unfortunately it’s not a good idea to leave doors open at night even to let cooler air in,” he said. In one incident, a male victim in his 30s living in Bottlebrush Court chased a burglar towards Quarry Road. There had been three burglaries on Friday 23 March and Saturday 24 March in the area at Quarry Road, Bottlebrush Court and Honeymyrtle Court. The fleeing burglar was described as being in his mid-20s, caucasian and wearing shorts with no T-shirt or shoes. He had a mullet hairstyle and seemed to be “substance affected”.

day 28 March on Golf Links Road in Frankston South. Police are investigating the circumstances of the death. The man was identified as an 83-year-old. The death is not deemed suspicious. It is believed the driver may have had a heart attack.

Thirsty thief POLICE are searching for a thirsty thief who used a stolen bank card to make a number of purchases, including a strawberry milk drink. Investigators have been told an offender entered the female change rooms of a soccer club on Monterey Boulevard, Frankston sometime between 3-4.15pm on Sunday 25 March. It is believed they went through a bag and took a number of items, including a black Mimco wallet, Tiffany necklace, bank cards, ID cards and a small amount of cash. A bank card was used later that day between 4.15-4.40pm at a number of locations in Frankston, including a convenience store, supermarket and petrol station. The card is believed to have been used by a man at the Seaford Road petrol station, who had stopped to fuel up on a strawberry milk beverage. Police have released images, right, of a man they believe may be able to help with their enquiries. He is of Caucasian appearance, about 178cm tall and aged between 22 and 25 years old with a slim build and fair hair. He was wearing a black T-shirt and pants.

Police are appealing for public help after burglars attempted to steal an ATM at a Langwarrin shopping centre, below, early on Monday (26 March). Police have been told unknown offenders attended a shopping centre in an unknown vehicle on FrankstonCranbourne Road sometime before 2am. It is believed they forced entry via electronic doors and used a chain to secure an ATM inside the centre. They attempted to drag the machine however they were unsuccessful and fled the scene, leaving tyre marks outside the doors. Staff from the bakery discovered the damage and called police. Frankston Crime Investigation Unit detectives are investigating and are keen to speak to anyone that may have seen any suspicious activity in the area.

GEORGE PENTLAND BOTANIC GARDENS, FRANKSTON PROUDLY BROUGHT TO YOU BY THE