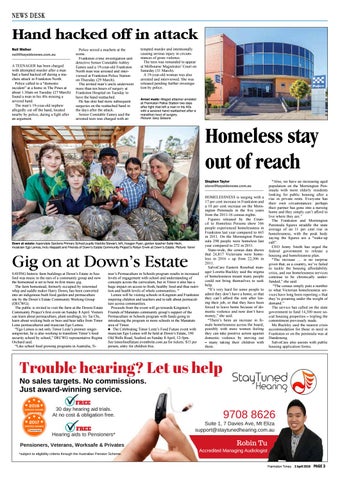 Hand hacked off in attack Neil Walker neil@baysidenews.com.au A TEENAGER has been charged with attempted murder after a man had a hand hacked off during a machete attack in Frankston North. Police called to a “domestic incident” at a home in The Pines at about 1.30am on Tuesday (27 March) found a man in his 40s missing a severed hand. The man’s 19-year-old nephew allegedly cut off the hand, located nearby by police, during a fight after an argument.

Police seized a machete at the scene. Frankston crime investigation unit detective Senior Constable Ashley Eames said a 19-year-old Frankston North man was arrested and interviewed at Frankston Police Station on Thursday (29 March). The arrsted man’s uncle underwent more than ten hours of surgery at Frankston Hospital on Tuesday to have the hand reattached. He has also had more subsequent surgeries on the reattached hand in the days after the attack. Senior Constable Eames said the arrested teen was charged with at-

tempted murder and intentionally causing serious injury in circumstances of gross violence. The teen was remanded to appear at Melbourne Magistrates’ Court on Saturday (31 March). A 19-year-old woman was also arrested and interviewed. She was released pending further investigation by police. Arrest made: Alleged attacker arrested at Frankston Police Station two days after fight that left a man in his 40s with a severed hand reattached after a marathon bout of surgery. Picture: Gary Sissons

Gig on at Down’s Estate SAVING historic farm buildings at Down’s Estate in Seaford was music to the ears of a community group and now the homestead is set to host its first music gig. The farm homestead, formerly occupied by renowned whip and saddle maker Harry Down, has been converted into an indigenous bush food garden and permaculture site by the Down’s Estate Community Working Group (DECWG). The public is invited to visit the farm at the Downs Estate Community Project’s first event on Sunday 8 April. Visitors can learn about permaculture, plant seedlings, try Tai Chi, learn about wicking beds or bees and hear talks from Timor Leste permaculturist and musician Ego Lemos. “Ego Lemos is not only Timor Leste’s premier singersongwriter, he is also working to transform Timor’s food security school by school,” DECWG representative Regina Orchard said. “Like school food growing programs in Australia, Ti-

mor’s Permaculture in Schools program results in increased levels of engagement with school and understanding of concepts across the curriculum, but in Timor it also has a huge impact on access to fresh, healthy food and thus nutrition and health levels of whole communities. “ Lemos will be visiting schools in Kingston and Frankston inspiring children and teachers and to talk about permaculture across communities. Proceeds from the event will go towards Kingston’s Friends of Manatuto community group’s support of the Permaculture in Schools program with funds going to introducing the program in more schools in the Manatuto area of Timor. n The Celebrating Timor Leste’s Food Future event with musician Ego Lemos will be held at Down’s Estate, 190 Old Wells Road, Seaford on Sunday 8 April, 12-5pm. See timorfoodfuture.eventbrite.com.au for tickets. $15 per person, entry for children free.

HOMELESSNESS is surging with a 17 per cent increase in Frankston and a 10 per cent increase on the Mornington Peninsula in the five years from the 2011-16 census nights. Figures released by the Council to Homeless Persons show 546 people experienced homelessness in Frankston last year compared to 465 in 2011. On the Mornington Peninsula 298 people were homeless last year compared to 272 in 2011. State-wide, the census data shows that 24,817 Victorians were homeless in 2016 – up from 22,306 in 2011. SalvoCare Eastern Rosebud manager Loretta Buckley said the stigma of homelessness meant many people could not bring themselves to seek help. “It’s very hard for some people to admit they don’t have a home, or that they can’t afford the rent after losing their job, or that they have been forced to leave home because of domestic violence and now don’t have money,” she said. “There’s been an increase in female homelessness across the board, possibly with more women feeling they can take positive action against domestic violence by moving out – many taking their children with them.

“Also, we have an increasing aged population on the Mornington Peninsula with more elderly residents looking for public housing after a rise in private rents. Everyone has their own circumstances: perhaps their partner has gone into a nursing home and they simply can’t afford to live where they are.” The Frankston and Mornington Peninsula figures straddle the state average of an 11 per cent rise in homelessness, with the peak body saying the figures are a “wake-up call”. CEO Jenny Smith has urged the federal government to release a housing and homelessness plan. “The increase … is no surprise given that, as a country, we’ve failed to tackle the housing affordability crisis, and our homelessness services continue to be chronically underfunded,” she said. “The census simply puts a number to what Victorian homelessness services have long been reporting – that they’re groaning under the weight of demand.” The service has called on the state government to fund 14,500 more social housing properties – tripling the commitment previously made. Ms Buckley said the nearest crisis accommodation for those in need in Frankston or on the peninsula was at Dandenong. SalvoCare also assists with public housing application forms.