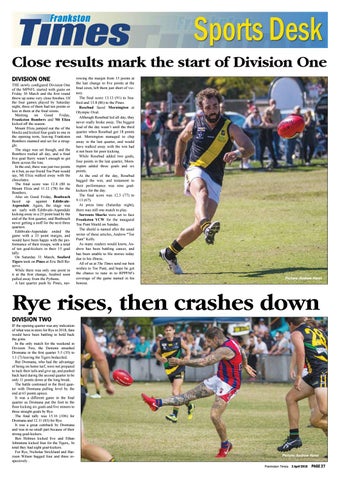 Close results mark the start of Division One DIVISION ONE

THE newly configured Division One of the MPNFL started with gusto on Friday 30 March and the first round threw up some very close finishes. Of the four games played by Saturday night, three of them had ten points or less in them at the final sirens. Meeting on Good Friday, Frankston Bombers and Mt Eliza kicked off the season. Mount Eliza jumped out the of the blocks and kicked four goals to one in the opening term, leaving Frankston Bombers stunned and set for a struggle. The stage was set though, and the Bombers trailed all day, and a final five goal flurry wasn’t enough to get them across the line. In the end, there was just two points in it but, as our friend Toe Punt would say, Mt Eliza walked away with the chocolates. The final score was 12.8 (80 to Mount Eliza and 11.12 (78) for the Bombers. Also on Good Friday, Bonbeach faced up against EdithvaleAspendale. Again, the stage was set early with Edithvale-Aspendale kicking away to a 25 point lead by the end of the first quarter, and Bonbeach never getting a sniff for the next three quarters. Edithvale-Aspendale ended the game with a 33 point margin, and would have been happy with the performance of their troops, with a total of ten goal-kickers in their 15 goal tally. On Saturday 31 March, Seaford Tigers took on Pines at Eric Bell Reserve. While there was only one point in it at the first change, Seaford soon pulled away from the Pythons. A last quarter push by Pines, nar-

rowing the margin from 15 points at the last change to five points at the final siren, left them just short of victory. The final score 13.13 (91) to Seaford and 13.8 (86) to the Pines. Rosebud faced Mornington at Olympic Oval. Although Rosebud led all day, they never really broke away. The biggest lead of the day wasn’t until the third quarter when Rosebud got 18 points out. Mornington managed to chip away in the last quarter, and would have walked away with the win had it not been for poor kicking. While Rosebud added two goals, four points in the last quarter, Mornington added three goals and six points. At the end of the day, Rosebud bagged the win; and testament to their performance was nine goalkickers for the day. The final score was 12.5 (77) to 9.13 (67). At press time (Saturday night), there was still one match to play. Sorrento Sharks were set to face Frankston YCW for the inaugural Toe Punt Shield on Sunday. The shield is named after the usual writer of these articles, Andrew “Toe Punt” Kelly. As many readers would know, Andrew has been battling cancer, and has been unable to file stories today due to his illness. All of us at The Times send our best wishes to Toe Punt, and hope he got the chance to tune in to RPPFM’s coverage of the game named in his honour.

IF the opening quarter was any indication of what was in store for Rye in 2018, fans would have been battling to hold back the grins. In the only match for the weekend in Division Two, the Demons smashed Dromana in the first quarter 5.5 (35) to 1.1 (7) leaving the Tigers bedazzled. But Dromana, who had the advantage of being on home turf, were not prepared to tuck their tails and give up, and pushed back hard during the second quarter to be only 11 points down at the long break. The battle continued in the third quarter with Dromana pulling level by the end at 65 points apiece. It was a different game in the final quarter as Dromana put the foot to the floor kicking six goals and five minors to three straight goals by Rye. The final tally was 15.16 (106) for Dromana and 12.11 (83) for Rye. It was a great comback by Dromana and was in no small part because of their strong goal-kickers. Ben Holmes kicked five and Ethan Johnstone kicked four for the Tigers,. In total they had eight goal-kickers. For Rye, Nicholas Strickland and Harrison Wilson bagged four and three respectively .