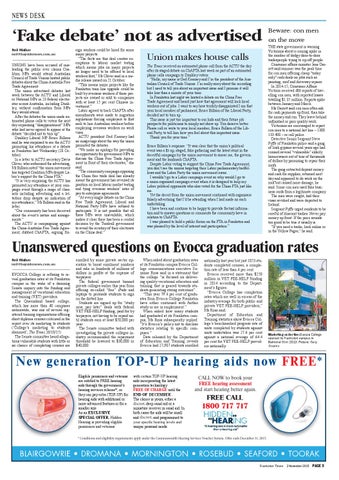 ‘Fake debate’ not as advertised Neil Walker neil@baysidenews.com.au UNIONS have been accused of misleading the public over claims Coalition MPs would attend Australian Council of Trade Unions hosted public debates about the China-Australia Free Trade Agreement. The union advertised debates last week between the ACTU and Liberal or National MPs in 23 federal electorates across Australia, including Dunkley, without confirmation from MPs they would attend. After the debates the union made automated phone calls to voters the next day expressing “disappointment” MPs who had never agreed to appear at the debate “decided not to turn up”. Dunkley Liberal MP Bruce Billson said he was surprised to see the ACTU promoting his attendance at a debate in Frankston last Wednesday (28 October). In a letter to ACTU secretary Davie Oliver, who authorised the advertising, Mr Billson noted “the union movement has targeted Coalition MPs despite Labor’s support for the China FTA”. “It is very surprising the ACTU has promoted my attendance at your campaign event through a range of channels including advertising and a letterbox drop despite no indication of my attendance,” Mr Billson said in the letter. “Our community has been deceived about the event’s nature and arrangements.” The ACTU is campaigning against the China-Australia Free Trade Agreement, dubbed ChAFTA, arguing for-

eign workers could be hired for some major projects. “The facts are this deal creates exemptions to labour market testing which means jobs on major projects no longer need to be offered to local workers first,” Mr Oliver said in a media release issued on 21 October. “This means major projects like the Frankston train line upgrade could be built by overseas workers if these projects are owned or sold to companies with at least 15 per cent Chinese investment.” Labor agreed to back ChAFTA after amendments were made to migration regulations forcing employers to first seek to hire Australian workers before employing overseas workers on work visas. ACTU president Ged Kearney had no misgivings about the way the union promoted the debates. “We make no apology for providing an opportunity for government MPs to discuss the China Free Trade Agreement in front of their electorates,” she said. “The community campaign opposing the China free trade deal has already meant the government has reversed its position on local labour market testing and tying overseas workers’ rates of pay to enterprise agreements. “At every single debate on the China Free Trade Agreement, Liberal and National Party MPs have refused to participate. It is not possible that all these MPs were unavailable, which makes it clear there has been a central decision by the Turnbull government to avoid the scrutiny of their electorate on the China deal.”

Union makes house calls The Times received an automated phone call from the ACTU the day after its staged debate on ChAFTA last week as part of an automated phone calls campaign to Dunkley voters: “Hello, my name is Ged Kearney and I’m the president of the Australian Council of Trade Unions. I’m really sorry about the recording but I need to tell you about an important issue and I promise it will take less than a minute of your time. In Frankston last night we hosted a debate on the China Free Trade Agreement and heard just how that agreement will lock local workers out of jobs. I want to say how terribly disappointed I am that your local member of parliament, Bruce Billson of the Liberal Party, decided not to turn up. This issue is just too important to our kids and their future job prospects for politicians to simply not show up. You deserve better. Please call or write to your local member, Bruce Billson of the Liberal Party, to tell him how you feel about this important issue. Thank you for your time.” Bruce Billson’s response: “It was clear that the union’s political event was a fit-up, staged, fake gathering and the latest stunt in the deceitful campaign by the union movement to smear me, the government and the landmark ChAFTA. Despite Labor voting to support the China Free Trade Agreement, you don’t see the unions targeting their Labor parliamentary bedfellows and the Labor Party the union movement owns. I wouldn’t go to a Labor campaign event so why would I go to a union organised campaign event when it is designed to help my Labor political opponents who also voted for the China FTA just like me. Yet the deceit from the union movement continued with organisers falsely advertising that I’d be attending when I had made no such undertaking. I have been and continue to be happy to provide factual information and to answer questions or comments the community have in relation to ChAFTA. I was pleased to hold a public forum on the FTA in Frankston and was pleased by the level of interest and participation.”

Beware: con men on the move THE state government is warning Victorians about a coming spike in the number of dodgy door-to-door tradespeople trying to rip off people. Consumer affairs minister Jane Garrett said summer was the peak time for con men offering cheap &quot;today only&quot; cash deals on jobs such as painting, roof and driveway repairs. In 2014-15, Consumer Affairs Victoria received 486 reports of travelling con men, with reported losses totalling $1.35 million. Reports spike between January and March. Ms Garrett said con men often ask for cash payments up front, then take the money and run. They leave behind unfinished or poor quality work. Victorians are encouraged to report con men to a national hot line – 1300 133 408 – or call police. Detective Senior Sergeant Steve Fyffe of Frankston police said a gang of Irish gypsies several years ago had conned several &quot;vulnerable&quot; elderly homeowners out of tens of thousands of dollars by promising to repair their roofs. The gang extracted deposit money and cash for supplies, returned next day and appeared to do work on the roof but caused more damage, he said. Some con men used fake business cards from a legitimate company. The men were caught, had their visas revoked and were deported to Ireland. Sergeant Fyffe urged residents to be careful of itinerant tradies. Never pay money up front. If the price sounds too good to be true it usually is. &quot;If you need a tradie, look online or in the Yellow Pages,&quot; he said.

Unanswered questions on Evocca graduation rates Neil Walker neil@baysidenews.com.au EVOCCA College is refusing to reveal graduation rates at its Frankston campus in the wake of a damning Senate inquiry into the funding and management of vocational education and training (VET) providers. The Queensland based college, which has more than 40 campuses nationwide, was one of several registered training organisations offering short diploma courses criticised in the report over its marketing to students (‘College’s marketing to students slammed’, The Times 26/10/15). The Senate committee heard allegations vulnerable students with little or no chance of completing courses are

enrolled by some private sector operators to boost enrolment numbers and rake in hundreds of millions of dollars in profits at the expense of taxpayers. The federal government banned private colleges earlier this year from offering so-called “free” iPads and laptops to persuade students to sign on the dotted line. Students are signed up for “study now, pay later” deals with federal VET FEE-HELP funding, paid for by taxpayers, not having to be repaid until students earn at least $50,000 per year. The Senate committee tasked with investigating the private colleges industry recommended the repayment threshold be lowered to $30,000 or $40,000.

When asked about graduation rates at its Frankston campus Evocca College communications executive Suzanne Ross said in a statement that the college “is focused on delivering quality vocational education and training that is geared towards students generating strong outcomes”. “This year 79.4 per cent of graduates from Evocca College Frankston have either continued with further study or are in employment.” When asked how many students had graduated at its Frankston campus, Ms Ross subsequently replied: “It’s Evocca’s policy not to disclose statistics relating to specific campuses.” Data released by the Department of Education and Training reveals Evocca had 27,907 students enrolled

nationally last year but just 1053 students completed courses, a completion rate of less than 4 per cent. Evocca received more than $250 million in VET FEE-HELP funding in 2014 according to the Department’s figures. “Evocca College has completion rates which are well in excess of the industry average for both public and private VET FEE-HELP providers,” Ms Ross said. Department of Education and Training statistics show Evocca College’s benchmarked progress rate of units completed by students against units undertaken was 27.6 per cent against a national average of 64.4 per cent for VET FEE-HELP providers nationally.