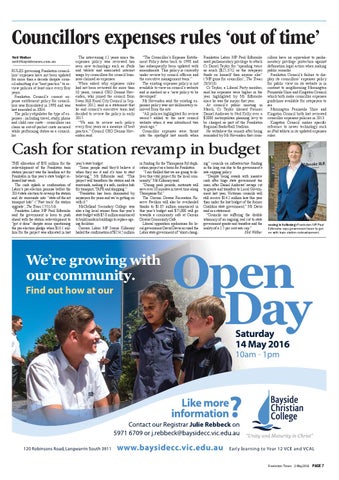 Councillors expenses rules ‘out of time’ Neil Walker neil@baysidenews.com.au RULES governing Frankston councillors’ expenses have not been updated for more than a decade despite council admitting it is “best practice” to review policies at least once every four years. Frankston Council’s current expense entitlement policy for councillors was formulated in 1998 and was last amended in 2004. The policy stipulates the type of expenses - including travel, study, phone and child care costs - councillors can claim as out-of-pocket costs incurred while performing duties as a councillor.

The intervening 12 years since the expenses policy was reviewed has seen new technology such as iPads and tablets and associated internet usage by councillors for council business claimed as expenses. When asked why expenses rules had not been reviewed for more than 10 years, council CEO Dennis Hovenden, who joined the council from Swan Hill Rural City Council in September 2012, said in a statement that he and council’s executive team had decided to review the policy in early 2015. “We aim to review each policy every four years as a measure of best practice,” Council CEO Dennis Hovenden said.

“The Councillor’s Expense Entitlement Policy dates back to 1998 and has subsequently been updated with amendments. This policy is currently under review by council officers and the executive management team.” The existing expenses policy is not available to view on council’s website and is marked as a ‘new policy to be developed’. Mr Hovenden said the existing expenses policy was not deliberately removed from the site. “All policies highlighted for review weren’t added to the new council website when it was introduced two years ago.” Councillor expenses were thrust into the spotlight last month when

Frankston Labor MP Paul Edbrooke used parliamentary privilege to attack Cr Darrel Taylor for “spending twice as much [$25,371] as the ratepayer funds on himself than anyone else” (‘MP guns for councillor’, The Times 28/3/16). Cr Taylor, a Liberal Party member, said his expenses were higher in the year highlighted by Mr Edbrooke since he was the mayor that year. At council’s public meeting in March, Cr Taylor likened Premier Daniel Andrews to Ned Kelly over a $2000 metropolitan planning levy to be charged as part of the Frankston Regional Basketball Stadium. He withdrew the remark after being reminded by Mr Hovenden that coun-

Cash for station revamp in budget THE allocation of $50 million for the redevelopment of the Frankston train station precinct was the headline act for Frankston in this year’s state budget released last week. The cash splash is confirmation of Labor’s pre-election promise before the 2014 state election to revamp the station and its surrounds into “state-of-the-art transport hub” (‘’Fast track’ for station upgrade’, The Times 17/11/14). Frankston Labor MP Paul Edbrooke said the government is keen to push ahead with the station redevelopment to “get it done” despite some questioning the pre-election pledge when $13.1 million for the project was allocated in last

year’s state budget. “Some people said they’d believe it when they see it and it’s time to start believing,” Mr Edbrooke said. “This project will transform the station and its surrounds, making it a safe, modern hub for transport, TAFE and shopping.” “Frankston has been dominated by naysayers for years and we’re getting on with it.” McClelland Secondary College was also a big local winner from this year’s state budget with $5.8 million announced to build modern buildings to replace ageing facilities. Carrum Labor MP Sonya Kilkenny hailed the confirmation of $154.5 million

in funding for the Thompsons Rd duplication project as a boon for Frankston. “I am thrilled that we are going to deliver this vital project for the local community,” Ms Kilkenny said. “During peak periods, motorists will save over 10 minutes in travel time along Thompsons Rd.” The Carrum Downs Recreation Reserve Pavilion will also be overhauled thanks to $1.05 million announced in this year’s budget and $75,000 will go towards a community cafe at Carrum Downs Community Cafe. Liberal opposition spokesman for local government David Davis accused the Labor state government of “short-chang-

ing” councils on infrastructure funding in the long run due to the government’s rate capping policy. “Despite being awash with massive cash after huge state government tax rises, after Daniel Andrews’ savage cut to grants and transfers to Local Government last year, Victorian councils will still receive $14.2 million less this year than under the last budget of the former Coalition state government,” Mr Davis said in a statement. “Councils are suffering the double whammy of an ongoing real cut to state government grants and transfers and the reality of a 2.5 per cent rate cap.” Neil Walker