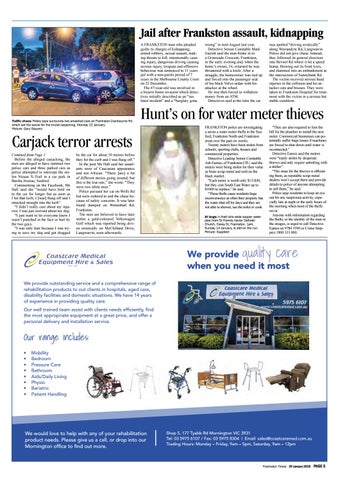 Jail after Frankston assault, kidnapping A FRANKSTON man who pleaded guilty to charges of kidnapping, armed robbery, sexual assault, making threats to kill, intentionally causing injury, dangerous driving causing serious injury, trespass and offensive behaviour was sentenced to 11 years jail with a non-parole period of 7 years in the Melbourne County Court on 22 December. The 47-year-old was involved in a bizarre home invasion which detectives initially described as an “isolated incident” and a “burglary gone

was spotted “driving erratically” along Warrandyte Rd, Langwarrin. Police did not give chase. Instead, they followed its general direction into Bevnol Rd where it hit a speed hump, blowing out its front tyres, and slammed into an embankment at the intersection of Sunnybank Rd. The victim received serious head injuries in the collision and his attacker cuts and bruises. They were taken to Frankston Hospital for treatment with the victim in a serious but stable condition.

Hunt’s on for water meter thieves

Carjack terror arrests Contined from Page 1 Before the alleged carjacking, the men are alleged to have rammed two police cars and three parked cars as police attempted to intercept the stolen Nissan X-Trail in a car park in Bardia Avenue, Seaford. Commenting on the Facebook, Ms Hall said she “would have held on to the car for longer but as soon as I hit that kerb, I [was] flung off and I smacked straight into the kerb”. “I didn’t really care about my injuries; I was just worried about my dog. “I just want to let everyone know I wasn’t punched in the face or hurt by the two guys. “I was only hurt because I was trying to save my dog and got dragged

wrong” in mid-August last year. Detective Senior Constable Mark Garrett said the man broke in to a Grimwade Crescent, Frankston, in the early evening and, when the home’s owner, 54, returned he was threatened with a knife. After a struggle, the homeowner was tied up and forced into the passenger seat of his black Volvo sedan with his attacker at the wheel. He was then forced to withdraw money from an ATM. Detectives said at the time the car

by the car for about 50 metres before they hit the curb and I was flung off.” In the post Ms Hall said her assailants were of Caucasian appearance and not African. “There [are] a lot of different stories going around, but this is the true one,” she wrote. “They were two white men.” Police pursued her car on Wells Rd but were ordered to end the chase because of safety concerns. It was later found dumped on Wettenhall Rd, Frankston. The men are believed to have later stolen a gold-coloured Volkswagen Golf which was reported being driven erratically on McClelland Drive, Langwarrin, soon afterwards.

FRANKSTON police are investigating a series a water meter thefts in the Seaford, Frankston North and Frankston areas over the past six weeks. Twenty meters have been stolen from schools, sporting clubs, houses and commercial properties. Detective Leading Senior Constable Ash Eames, of Frankston CIU, said the meters were being stolen for their value as brass scrap metal and sold on the black market. “Each meter is worth only $15-$40, but they cost South East Water up to $1000 to replace,” he said. “These thefts cause residents huge inconvenience as often their property has the water shut off for days and they are not able to shower, use the toilet or cook. At large: A thief who stole copper water pipe from St Francis Xavier Catholic Church, Davey St, Frankston, 1am, Sunday 14 January, is still on the run. Picture: Supplied

“They are also required to foot the bill for the plumber to install the new meter. Commercial businesses can potentially suffer huge losses if machines are forced to shut down until water is reconnected.” Detective Eames said the meters were “easily stolen by desperate thieves and only require unbolting with a shifter”. “The issue for the thieves is offloading them, as reputable scrap metal dealers won’t accept them and provide details to police of anyone attempting to sell them,” he said. Police urge residents to keep an eye out for any suspicious activity, especially late at night or the early hours of the morning when most of the thefts occur. Anyone with information regarding the thefts, or the identity of the man in the images, is urged to call Detective Eames on 9784 5590 or Crime Stoppers 1800 333 000.

We provide quality care when you need it most We provide outstanding service and a comprehensive range of rehabilitation products to out clients in hospitals, aged care, disability facilities and domestic situations. We have 14 years of experience in providing quality care. Our well trained team assist with clients needs efficiently, find the most appropriate equipment at a great price, and offer a personal delivery and installation service.

We would love to help with any of your rehabilitation product needs. Please give us a call, or drop into our Mornington office to find out more.