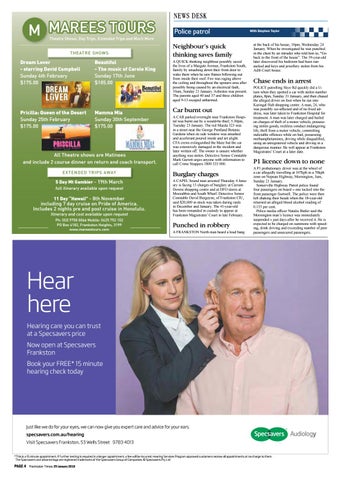 All Theatre shows are Matinees and include 2 course dinner on return and coach transport. EXTENDED TRIPS AWAY

Neighbour’s quick thinking saves family A QUICK thinking neighbour possibly saved the lives of a Margate Avenue, Frankston South, family by smashing down their front door to wake them when he saw flames billowing out from inside their roof. Fire was raging above the ceiling and throughout the upstairs area after possibly being caused by an electrical fault, 10am, Sunday 21 January. Asbestos was present. The parents aged 40 and 37 and three children aged 9-13 escaped unharmed.

Car burnt out A CAR parked overnight near Frankston Hospital was burnt out by a would-be thief, 5.30pm, Tuesday 23 January. The red Mazda 323 was in a street near the George Pentland Botanic Gardens when its side window was smashed and accelerant poured inside and set alight. CFA crews extinguished the blaze but the car was extensively damaged in the incident and later written off. The owner is unsure whether anything was stolen. Detective Senior Constable Mark Garrett urges anyone with information to call Crime Stoppers 1800 333 000.

Burglary charges A CAPEL Sound man arrested Thursday 4 January is facing 15 charges of burglary at Carrum Downs shopping centre and at DFO stores at Moorabbin and South Wharf. Detective Senior Constable David Burgoyne, of Frankston CIU, said $20,000 in stock was taken during raids in December and January. The 41-year-old has been remanded in custody to appear at Frankston Magistrates’ Court in late February.

at the back of his house, 10pm, Wednesday 24 January. When he investigated he was punched in the chest by an intruder who told him to, “Go back to the front of the house”. The 59-year-old later discovered his bedroom had been ransacked and keys and jewellery stolen from his Adib Court house.

Chase ends in arrest POLICE patrolling Skye Rd quickly did a Uturn when they spotted a car with stolen number plates, 8pm, Sunday 21 January, and then chased the alleged driver on foot when he ran into Karingal Hub shopping centre. A man, 24, who was possibly ice-affected and of no fixed address, was later taken to Frankston Hospital for treatment. A man was later charged and bailed on charges of theft of a motor vehicle, possessing stolen goods, reckless conduct endangering life, theft from a motor vehicle, committing indictable offences while on bail, possessing methamphetamines, driving while disqualified, using an unregistered vehicle and driving in a dangerous manner. He will appear at Frankston Magistrates’ Court at a later date.

P1 licence down to none A P1 probationary driver was at the wheel of a car allegedly travelling at 107kph in a 70kph zone on Nepean Highway, Mornington, 3am, Sunday 21 January. Somerville Highway Patrol police found four passengers on board – one tucked into the front passenger footwell. The police were then left shaking their heads when the 18-year-old returned an alleged blood alcohol reading of 0.155 per cent. Police media officer Natalie Butler said the Mornington man’s licence was immediately suspended – just days after he received it. He is expected to be charged on summons with speeding, drink driving and exceeding number of peer passengers and unsecured passengers.

Just like we do for your eyes, we can now give you expert care and advice for your ears. specsavers.com.au/hearing Visit Specsavers Frankston, 53 Wells Street 9783 4013 *This is a 15 minute appointment. If further testing is required in a longer appointment, a fee will be incurred. Hearing Services Program approved customers receive all appointments at no charge to them. The Specsavers and advance logo are registered trademarks of the Specsavers Group of Companies. © Specsavers Pty Ltd