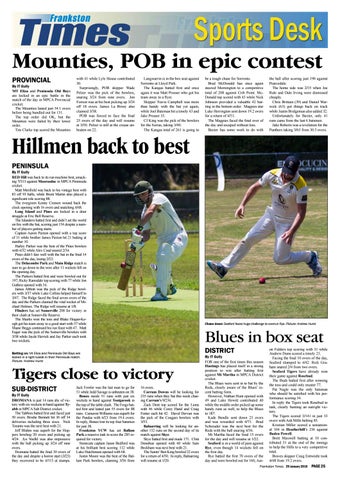 By IT Gully MT Eliza and Peninsula Old Boys are locked in an epic battle in the match of the day in MPCA Provincial cricket. The Mounties lasted just 54.1 overs before being bundled out for 151. The top order did OK, but the Mounties were failed by their lower order. Tim Clarke top scored the Mounties

with 41 while Lyle House contributed 30. Surprisingly, POB skipper Wade Pelzer was the pick of the bowlers, snaring 3/24 from nine overs. Jon Forrest was at his best picking up 3/24 off 18 overs. James La Brooy also claimed 3/38. POB was forced to face the final 25 overs of the day and will resume at 3/50. Pelzer is still at the crease unbeaten on 22.

Langwarrin is in the box seat against Sorrento at Lloyd Park. The Kangas batted first and once again it was Matt Prosser who got his team away to a flyer. Skipper Travis Campbell was more than handy with the bat yet again, while Joel Bateman hit a timely 43 and Jake Prosser 35. CJ King was the pick of the bowlers for the Sorras, taking 3/40. The Kangas total of 261 is going to

Hillmen back to best

be a tough chase for Sorrento. Brad McDonald has once again steered Mornington to a competitive total of 208 against Crib Point. McDonald top scored with 45 while Nick Johnson provided a valuable 42 batting in the bottom order. Magpies star Luke Herrington sent down 19.2 overs for a return of 4/51. The Magpies faced the final over of the day and escaped without loss. Baxter has some work to do with

the ball after scoring just 190 against Pearcedale. The home side was 2/15 when Joe Rule and Dale Irving were dismissed cheaply. Chris Brittain (39) and Daniel Warwick (63) got things back on track while Justin Bridgeman also added 32. Unfortunately for Baxter, only 41 runs came from the last 6 batsmen. Jake Roberts was a revelation for the Panthers taking 5/65 from 30.5 overs.

By IT Gully RED Hill was back to its run machine best, smacking 7/313 against Moorooduc in MPCA Peninsula cricket. Matt Merifield was back to his vintage best with 83 off 93 balls, while Brent Martin also played a significant role scoring 88. The evergreen Kenny Cremen wound back the clock opening with 16 overs and snatching 4/48. Long Island and Pines are locked in a dour struggle at Eric Bell Reserve. The Islanders batted first and didn’t set the world on fire with the bat, scoring just 154 despite a number of players getting starts. Captain Aaron Paxton opened with a top score of 31 while brother James Paxton hit 21 batting at number 10. Harley Parker was the best of the Pines bowlers with 4/32 while Alex Coad snared 2/34. Pines didn’t fare well with the bat in the final 14 overs of the day, losing 2/22. The Delacombe Park and Main Ridge match is sure to go down to the wire after 11 wickets fell on the opening day. The Parkers batted first and were bowled out for 197, Ricky Ramsdale top scoring with 77 while Jon Guthrie opened with 34. James Abbott was the pick of the Ridge bowlers with 3/37 while Luke Collins helped himself to 3/47. The Ridge faced the final seven overs of the day and the Parkers claimed the vital wicket of Michael Holmes. The Ridge will resume at 1/8. Flinders has set Somerville 208 for victory in their clash at Somerville Reserve. The Sharks won the toss and Blake Hogan-Keogh got his team away to a good start with 57 while Shane Beggs continued his run feast with 47. Matt Eager was the pick of the Somerville bowlers with 3/38 while Jayde Herrick and Jay Parker each took two wickets.

Batting on: Mt Eliza and Peninsula Old Boys are locked in a tight tussle in their Peninsula match. Picture: Andrew Hurst

By IT Gully DROMANA is just 14 runs shy of victory with six wickets in hand against Tyabb in MPCA Sub District cricket. The Yabbies batted first and faced just 50 overs. Brodie Bennett hit 36 off 34 deliveries including three sixes. Nick Toranto was the next best with 21. Jeff Bluhm was superb for the Hoppers bowling 20 overs and picking up 4/24. Jye Voelkl was also impressive with the ball picking up 3/24 off nine overs. Dromana batted the final 30 overs of the day and despite a horror start (3/25) they recovered to be 4/115 at stumps.

Jack Fowler was the last man to go for 51 while Jedd Savage is unbeaten on 38. Boneo needs 51 runs with just six wickets in hand against Tootgarook in the top of the table clash. The Frogs batted first and lasted just 55 overs for 88 runs. Cameron Williams was superb for the Pandas with 6/23 from 19.4 overs. In reply, Boneo lost its top four batsmen for just 38. Frankston YCW has set Ballam Park a massive task to score the 285 required for victory. Stonecats captain Jason Bedford was at his brilliant best scoring 112 while Luke Hutchinson opened with 68. Justin Moore was the best of the Ballam Park bowlers, claiming 3/56 from

16 overs. Carrum Downs will be looking for 235 runs when they bat this week chasing Carrum’s 9/234. Zack Dent top scored for the Lions with 46 while Corey Hand and Craig Foster each hit 42. David Dervan was the pick of the Cougars bowlers with 3/53. Balnarring will be looking for another 152 runs on the second day of its match against Skye. Skye batted first and made 171. Clint Donohue opened with 60 while Sam Beckham was next best with 21. The Saints’ Ben King bowled 22 overs for a return of 4/50. In reply, Balnarring will resume at 1/20.

By IT Gully FOR one of the first times this season Hastings has placed itself in a strong position to win after batting first against Mt Martha in MPCA District cricket. The Blues were sent in to bat by the Reds, clearly aware of the Blues’ recent batting form. However, Nathan Hunt opened with 49 and Luke Hewitt contributed 40 while the middle order picked up some handy runs as well, to help the Blues to 187. Kade Bendle sent down 25 overs and was rewarded with 4/71. Brad Schreuder was the next best for the Reds with the ball snaring 4/56. Mt Martha faced the final 15 overs for the day and will resume at 1/22. Seaford is in a world of pain against Rye, even though 14 wickets fell on the first day. Rye batted the first 70 overs of the day and were bowled out for 160, Aar-

on Fidders top scoring with 31 while Andrew Dunn scored a timely 25. Facing the final 10 overs of the day, Seaford slumped to 4/42. Rick Graham snared 2/4 from two overs. Seaford Tigers have already won their game against Rosebud. The Buds batted first after winning the toss and could only muster 77. Pat Nagle was the only batsman who should be satisfied with his performance scoring 34. In reply the Tigers took Rosebud to task, clearly hunting an outright victory. The Tigers scored 3/141 in just 33 overs with Ash Mills belting 85. Kristian Miller scored a sensational 104 in Heatherhill’s 236 against Baden Powell. Brett Maxwell batting at 10 contributed 31 at the end of the innings to help the Hills to a very competitive total. Braves skipper Craig Entwistle took 4/48 from 19.2 overs.