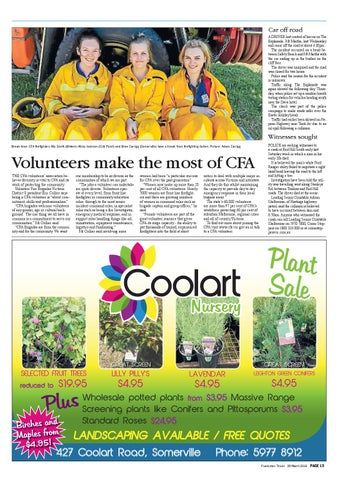 Car off road A DRIVER lost control of his car on The Esplanade, Mt Martha, last Wednesday and came off the road at about 4.30pm. The incident occurred on a bend between Safety Beach and Mt Martha with the car ending up in the bushes on the cliff face. The driver was uninjured and the road was closed for two hours. Police said the reason for the accident is unknown. Traffic along The Esplanade was again slowed the following day, Thursday, when police set up a random breath testing station for vehicles heading south near the Dava hotel. The check was part of the police campaign to make roads safer over the Easter holiday break. Traffic had earlier been slowed on Nepean Highway near Tanti Av due to an oil spill following a collision.

Volunteers make the most of CFA THE CFA volunteers’ association believes diversity is vital to CFA and its work of protecting the community. Volunteer Fire Brigades Victoria District 8 president Eric Collier says being a CFA volunteer is “about commitment, skills and professionalism”. “CFA brigades welcome volunteers of any gender, age or cultural background. The one thing we all have in common is a commitment to serve our communities,” Mr Collier said. “CFA Brigades are from the community and for the community. We want

our membership to be as diverse as the communities of which we are part. “The jobs a volunteer can undertake are quite diverse. Volunteers operate at every level, from front line firefighter or community education roles, through to the most senior incident command roles, in specialist roles such as being a fire Investigator, emergency medical response, and in support roles handling things like administration, equipment maintenance, logistics and fundraising.” Mr Collier said involving more

women had been “a particular success for CFA over the past generation”. “Women now make up more than 20 per cent of all CFA volunteers. Nearly 5000 women are front line firefighters and there are growing numbers of women in command roles such as brigade captain and group officer,” he said. “Female volunteers are part of the great volunteer resource that gives CFA its surge capacity - the ability to put thousands of trained, experienced firefighters into the field at short

notice to deal with multiple major incidents across Victoria and interstate. And they do this whilst maintaining the capacity to provide day to day emergency response in their local brigade areas.” The state’s 60,000 volunteers are more than 97 per cent of CFA’s workforce protecting 60 per cent of suburban Melbourne, regional cities and all of country Victoria. To find out more about joining the CFA visit www.cfa.vic.gov.au or talk to a CFA volunteer.

POLICE are seeking witnesses to a crash at Red Hill South early last Saturday week in which a man in his early 20s died. It is believed the man’s white Ford Ranger utility failed to negotiate a right hand bend leaving the road to the left and hitting a tree. Investigators have been told the utility was travelling west along Stanleys Rd, between Tonkins and Red Hill roads. The driver died at the scene. Leading Senior Constable Adrian Shelbourne, of Hastings highway patrol, said the collision is believed to have occurred between 4am and 6.50am. Anyone who witnessed the crash can call Leading Senior Constable Shelbourne on 5970 7800, Crime Stoppers on 1800 333 000 or at crimestoppersvic.com.au