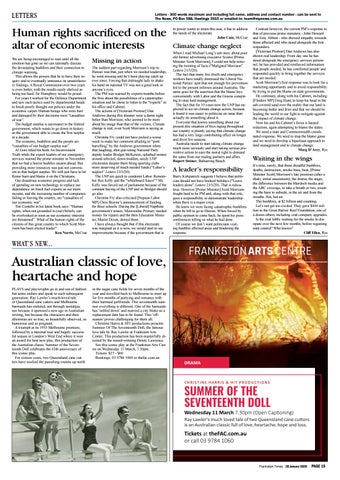 Human rights sacrificed on the altar of economic interests We are being encouraged to wait until all the emotion has gone so we can rationally discuss the devastating bushfires and their connection to climate warming. This allows the powers that be to have their inquiry and to eventually announce its unsatisfactory findings. A Royal Commission over two years is even better, with the results easily shelved as being too hard. Sir Humphrey would be proud. For years I worked for the Defence Department and saw such tactics used by departmental heads to brush poorly thought out policies under the economic carpet. Human beings who were hurt and damaged by their decisions were “casualties of war”. The budget surplus is sacrosanct to the federal government, which wants to go down in history as the government able to create the first surplus in a decade. The economy, bushfires and the people are “casualties of our budget surplus war”. Al Gore titled his book An Inconvenient Truth while the expert leaders of our emergency services warned the prime minister in November that we had a horror bushfire season ahead. But providing more resources was just not convenient to that budget surplus. We will just have to let Rome burn and blame it on the Christians. Our disastrous economic progress and lack of spending on new technology to replace our dependence on fossil fuel exports as our main income, and the increasing number of companies failing or leaving the country, are “casualties of our economic war”. Tim Costello in his latest book says: “Human rights, when not grounded in (our) beliefs, can be overlooked as soon as our economic interests are threatened”. What of the human rights of the citizens of this great country to which Scott Morrison has been elected leader? Ken Norris, McCrae

Missing in action The saddest part regarding Morrison’s trip to Hawaii was that, just when we needed leadership, he went missing and he’s been playing catch up ever since. Forcing that distraught lady to shake his hand on national TV was not a good look in anyone’s eyes. The PM was warned by experts months before the fires about the possibilities of a catastrophic situation and he chose to listen to the “experts” in his office and Cabinet. The actions of [Victorian Premier] Dan Andrews during this disaster were a damn sight better than Morrison, who seemed to be more about his image than that of the victims. Climate change is real, even Scott Morrison is saying as much. Christine Fry could not have picked a worse week to make her comment alluding to “pork barrelling” by the Andrews government when that laughing, shot gun toting National Party deputy leader Bridget McKenzie, splashed money around selected, down trodden, needy LNP electorates despite there being sporting clubs more deserving of much needed funds (“Labor’s neglect” Letters 21/1/20). The LNP are quick to condemn Labor. Remember Roz Kelly and the “whiteboard fiasco”? Ms Kelly was forced out of parliament because of the constant baying of the LNP and so Bridget should go also. Christine Fry also criticised [Nepean Labor MP] Chris Brayne’s announcement of funding for three schools. During the [Liberal] Napthine government’s tenure, Moorooduc Primary needed money for repairs and the then Education Minister, Martin Dixon, denied them. I have always thought that if this electorate was marginal as it is now, we would start to see improvements because if the government that is

in power wants to retain this seat, it has to address the needs of the electorate. John Cain, McCrae

Climate change neglect When I read Michael Long’s sob story about poor old former advertising executive Scomo [Prime Minister Scott Morrison], I could not help noticing the twisting of facts (“Maligned Morrison” Letters 21/1/20). The fact that many fire chiefs and emergency workers have totally dismissed the Liberal National Parties’ spin that not enough fire prevention led to the present infernos around Australia. The same goes for the assertion that the blame lays conveniently with Labor and the Greens conspiring to stop land management. The fact that for 10 years now the LNP has neglected to act on climate change action, because it found it was easier to politicise an issue than actually do something about it. Everyone that knows something about our present dire situation of fires raging throughout our country is plainly saying that climate change has had a very large contributing effect on longer and dryer fire seasons. Australia needs to start taking climate change much more seriously and start taking serious preventive action to earn the moral right to demand the same from our trading partners and allies. Rupert Steiner, Balnarring Beach

A leader’s responsibility Barry Kirkpatrick suggests I believe that politician should not have booked holidays (“Leave leaders alone” Letters 21/1/20). That is ridiculous. However [Prime Minister] Scott Morrison fought hard to be PM and, along with that role, goes a responsibility to demonstrate leadership when there is a major crisis. He knew we were facing catastrophic bushfires when he left to go to Hawaii. When forced by public opinion to come back, he spent his press conferences telling us what he had done. Of course we don’t want politicians visiting bushfire effected areas and hindering the response.

Contrast however, the current PM’s response to that of previous prime ministers - John Howard and Tony Abbott - who showed empathy towards those affected and who stood alongside the first responders. [Victorian Premier] Dan Andrews has also shown real leadership. From day one he has stood alongside the emergency services personnel, he has provided and reinforced information that people needed, he has comforted people and responded quickly to bring together the services that are needed. Scott Morrison’s first response was to look for a marketing opportunity and to avoid responsibility by trying to put the blame on state governments. He continues, along with his Cabinet, including [Flinders MP] Greg Hunt, to keep his head in the ash covered sand over the reality that our land is becoming hotter and drier and that we should be leading the world in our fight to mitigate against the impact of climate change. Now his and his Cabinet’s focus is hazard reduction, again attempting to blame the states. We need a state and Commonwealth coordinated response. We need to stop the blame game and we need to develop a bipartisan approach to land management and to climate change. Marg D’Arcy, Rye

Waiting in the wings It’s time, surely, that those dreadful bushfires, deaths, destruction, smoke haze, heat, [Prime Minister Scott] Morrison’s late promises (after a shaky initial assessment), the drama, the anger, the difference between the Murdoch media and the ABC coverage, to take a breath or two, awaiting the haze to subside, in the air and from the mouths. Hot, hot air. The bushfires, at $2 billion and counting. Let’s not get too excited. They gave $444 million to the Great Barrier Reef Foundation, one of a dozen others, including coal company upgrades. Is the coal lobby waiting for the smoke to dissipate over the next few months, before regaining total control? Who knows? Cliff Ellen, Rye

Australian classic of love, heartache and hope PLAYS and playwrights go in and out of fashion but some endure and speak to each subsequent generation. Ray Lawler’s much-loved tale of Queensland cane cutters and Melbourne barmaids has endured, not through nostalgia, nor because it spawned a new age in Australian writing, but because the characters and their dilemmas are so true, so beautifully observed, so humorous and so poignant. A triumph at its 1955 Melbourne premiere, followed by a national tour and hugely successful season in London’s West End where it won an award for best new play, this production of the Australian classic Summer of the Seventeenth Doll celebrates the 65th anniversary of this iconic play. For sixteen years, two Queensland cane cutters have worked the punishing routine up north

in the sugar cane fields for seven months of the year and travelled back to Melbourne to meet up for five months of partying and romance with their barmaid girlfriends. This seventeenth summer everything is different. One of the barmaids has ‘settled down’ and married a city bloke so a replacement date has to be found. This ‘offseason’ proves challenging for them all. Christine Harris &amp; HIT productions presents Summer Of The Seventeenth Doll, the famous love tale by Ray Lawler at Frankston Arts Centre. This production has been masterfully directed by the award-winning Denny Lawrence. See this iconic play at the Frankston Arts Centre on Wednesday 11 March, 7.30pm. Tickets: $27 - $60 Bookings: 03 9784 1060 or thefac.com.au