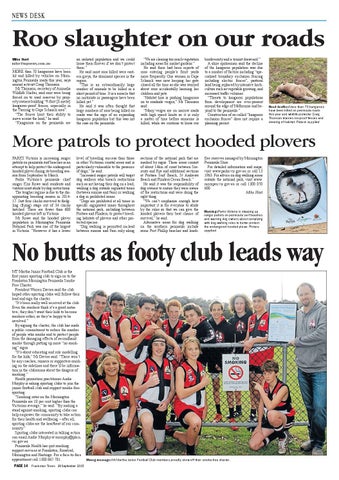 Roo slaughter on our roads Mike Hast mike@mpnews.com.au MORE than 70 kangaroos have been hit and killed by vehicles on Mornington Peninsula roads this year, says animal activist Craig Thomson. Mr Thomson, secretary of Animalia Wildlife Shelter, said roos were being forced on to road reserves by property owners building “9-foot [3-metre] kangaroo-proof fences, especially in the Tuerong to Cape Schanck area”. “The fences limit their ability to move across the land,” he said. “Kangaroos on the peninsula are

an isolated population and we could loose them forever if we don’t protect them.” He said most roos killed were eastern greys, the dominant species in the region. “This is an extraordinarily large number of animals to be killed in a short period of time. It is a miracle that no motorists or passengers have been killed yet.” He said it was often thought that large numbers of roos being killed on roads was the sign of an expanding kangaroo population but this was not the case on the peninsula.

“We are clearing too much vegetation including areas for market gardens.” He said there had been reports of roos entering people’s front yards more frequently. One woman in Cape Schanck was now keeping her gate closed all the time as she was worried about roos accidentally harming her children and pets. “Habitat loss is pushing kangaroos on to roadside verges,” Mr Thomson said. “Many verges are on narrow roads with high speed limits so it is only a matter of time before someone is killed, while we continue to loose our

biodiversity and a tourist drawcard.” A shire spokesman said the decline of the kangaroo population was due to a number of factors including “specialised boundary exclusion fencing including electric fences”, pastoral land being replaced by intensive horticulture such as vegetable growing, and increased traffic volumes. “Threats to kangaroo populations from development are ever-present around the edge of Melbourne and beyond to the peninsula.” Construction of so-called “kangaroo exclusion fences” does not require a planning permit.

More patrols to protect hooded plovers PARKS Victoria is increasing ranger patrols on peninsula surf beaches in an attempt to help protect the endangered hooded plover during its breeding season from September to March. Parks Victoria’s peninsula chief ranger Kris Rowe said residents and visitors must abide by dog restrictions. The tougher regime is due to the disappointing breeding season in 201415. Just four chicks survived to fledgling (flying) stage out of 34 chicks hatched. There are fewer than 600 hooded plovers left in Victoria. Mr Rowe said the hooded plover population in Mornington Peninsula National Park was one of the largest in Victoria. “However it has a lower

level of breeding success than those in other Victorian coastal areas and is particularly vulnerable to the presence of dogs,” he said. “Increased ranger patrols will target dog walkers who breach restrictions such as not having their dog on a lead, walking a dog outside regulated times (between sunrise and 9am) or walking a dog in prohibited zones. “Dogs are prohibited at all times in specific signposted zones throughout the national park, including between Portsea and Flinders, to protect breeding habitats of plovers and other protected species. “Dog walking is permitted on-lead between sunrise and 9am only along

sections of the national park that are marked by signs. These areas consist of about 14km of coast between Sorrento and Rye and additional sections at Portsea Surf Beach, St Andrews Beach and Flinders Ocean Beach.” He said it was the responsibility of dog owners to ensure they were aware of the restrictions and were doing the right thing. “We can’t emphasise enough how important it is for everyone to abide by the rules so that we can give the hooded plovers their best chance of survival,” he said. Alternative areas for dog walking on the southern peninsula include some Port Phillip beaches and leash-

No butts as footy club leads way MT Martha Junior Football Club is the first junior sporting club to sign on to the Frankston Mornington Peninsula Smoke Free Charter. President Warren Davies said the club hoped other sporting clubs will follow their lead and sign the charter. “It’s been really well received at the club. Even the smokers think it’s a good initiative; they don’t want their kids to become smokers either, so they’re happy to be involved.” By signing the charter, the club has made a public commitment to reduce the number of people who smoke and to protect people from the damaging effects of secondhand smoke through putting up more “no smoking” signs. “It’s about educating and role modelling for the kids,” Mr Davies said. “There won’t be any coaches, runners or supporters smoking on the sidelines and there’ll be information in the clubrooms about the dangers of smoking.” Health promotion practitioner Andie Murphy is asking sporting clubs to join the junior football club and support smoke-free sporting. “Smoking rates on the Mornington Peninsula are 10 per cent higher than the Victorian average,” he said. “By making a stand against smoking, sporting clubs can help empower the community to take action for their health and wellbeing – after all, sporting clubs are the heartbeat of our community.” Sporting clubs interested in talking action can email Andie Murphy at amurphy@phcn. vic.gov.au Peninsula Health has quit smoking support services at Frankston, Rosebud, Mornington and Hastings. For a face-to-face appointment call 1300 665 781.