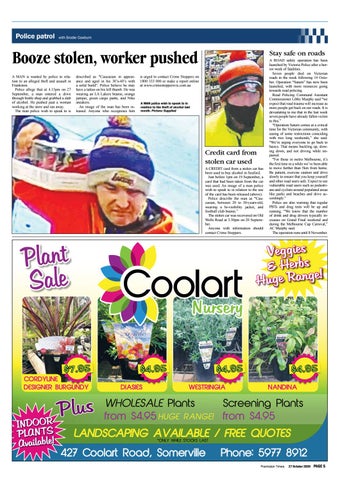 Booze stolen, worker pushed A MAN is wanted by police in relation to an alleged theft and assault in Frankston. Police allege that at 4.15pm on 27 September, a man entered a drive through bottle shop and grabbed a slab of alcohol. He pushed past a woman working at the store and ran away. The man police wish to speak to is

described as “Caucasian in appearance and aged in his 30’s-40’s with a solid build”. Police believe he may have a tattoo on his left thumb. He was wearing an LA Lakers beanie, orange jumper, green cargo pants, and Nike sneakers. An image of the man has been released. Anyone who recognises him

is urged to contact Crime Stoppers on 1800 333 000 or make a report online at www.crimestoppersvic.com.au

A MAN police wish to speak to in relation to the theft of alcohol last month. Picture: Supplied

Credit card from stolen car used A CREDIT card from a stolen car has been used to buy alcohol in Seaford. Just before 1pm on 19 September, a card that had been taken from the car was used. An image of a man police wish to speak to in relation to the use of the card has been released (above). Police describe the man as “Caucasian, between 20 to 30-years-old, wearing a hi-visibility jacket, and football club beanie.” The stolen car was recovered on Old Wells Road at 3.30pm on 20 September. Anyone with information should contact Crime Stoppers.

A ROAD safety operation has been launched by Victoria Police after a horror week of fatalities. Seven people died on Victorian roads in the week following 14 October. Operation “Saturn” has now been launched, with more resources going towards road policing. Road Policing Command Assistant Commissioner Libby Murphy said “we expect that road trauma will increase as more people get back on our roads. It is devastating to me that in the last week seven people have already fallen victim to this.” “Operation Saturn comes at a critical time for the Victorian community, with easing of some restrictions coinciding with two long weekends,” she said. “We’re urging everyone to go back to basics. That means buckling up, slowing down, and not driving while impaired. “For those in metro Melbourne, it’s the first time in a while we’ve been able to move further than 5km from home. Be patient, exercise caution and drive slowly to ensure that you keep yourself and other road users safe. Expect to see vulnerable road users such as pedestrians and cyclists around populated areas like parks and beaches and drive accordingly.” Police are also warning that regular PBTs and drug tests will be up and running. “We know that the number of drink and drug drivers typically increases on Grand Final weekend and during the Melbourne Cup Carnival,” AC Murphy said. The operation runs until 8 November.