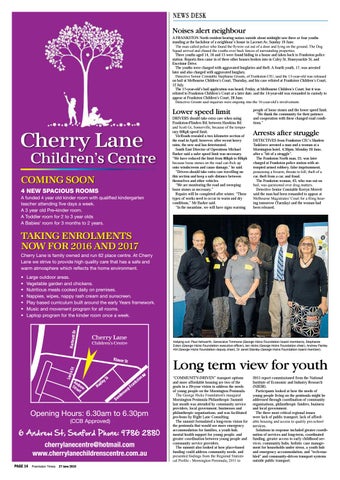 NEWS DESK Noises alert neighbour A FRANKSTON North resident hearing noises outside about midnight saw three or four youths standing at the backdoor of a neighbour’s house in Lacenet Av, Sunday 19 June. The man called police who found the flywire cut out of a door and lying on the ground. The Dog Squad arrived and chased the youths over back fences of surrounding properties. Three youths aged 14, 16 and 13 were found hiding in a house and taken back to Frankston police station. Reports then came in of three other houses broken into in Caley St, Honeysuckle St, and Excelsior Drive. The youths were charged with aggravated burglaries and theft. A fourth youth, 17, was arrested later and also charged with aggravated burglary. Detective Senior Constable Stephanie Groom, of Frankston CIU, said the 13-year-old was released on bail at Melbourne Children’s Court, Thursday, and his case relisted at Frankston Children’s Court, 12 July. The 17-year-old’s bail application was heard, Friday, at Melbourne Children’s Court, but it was relisted to Frankston Children’s Court at a later date, and the 14-year-old was remanded in custody to appear at Frankston Children’s Court, 28 June. Detective Groom said inquiries were ongoing into the 16-year-old’s involvement.

DRIVERS should take extra care when using Frankston-Flinders Rd, between Hawkins Rd and Scott Gr, Somerville, because of the temporary 60kph speed limit. VicRoads resealed a two kilometre section of the road in April, however, after recent heavy rains, the new seal has deteriorated. South East Director of Operations Michael Barker said a safer speed limit was necessary. “We have reduced the limit from 80kph to 60kph because loose stones on the road can flick up onto windscreens and cause damage,” he said. “Drivers should take extra care travelling on this section and keep a safe distance between themselves and other vehicles. “We are monitoring the road and sweeping loose stones as necessary.” Repairs will be completed after winter. “These types of works need to occur in warm and dry conditions,” Mr Barker said. “In the meantime, we will have signs warning

people of loose stones and the lower speed limit. “We thank the community for their patience and cooperation with these changed road conditions.”

Arrests after struggle DETECTIVES from Frankston CIU’s Shadow Taskforce arrested a man and a woman at a Mornington hotel, 4.30pm, Monday 20 June, after a “bit of a struggle”. The Frankston North man, 25, was later charged at Frankston police station with attempted armed robbery, false imprisonment, possessing a firearm, threats to kill, theft of a car, theft from a car, and fraud. The Frankston woman, 43, who was out on bail, was questioned over drug matters. Detective Senior Constable Kerryn Merrett said the man had been remanded to appear at Melbourne Magistrates’ Court for a filing hearing tomorrow (Tuesday) and the woman had been released.

TAKING ENROLMENTS NOW FOR 2016 AND 2017 Cherry Lane is family owned and run 62 place centre. At Cherry Lane we strive to provide high quality care that has a safe and warm atmosphere which reflects the home environment. Large outdoor areas. Vegetable garden and chickens. Nutritious meals cooked daily on premises. Nappies, wipes, nappy rash cream and sunscreen. Play based curriculum built around the early Years framework. Music and movement program for all rooms. Laptop program for the kinder room once a week.

“COMMUNITY-DRIVEN” transport options and more affordable housing are two of the goals in a 20-year vision to address the needs of young people on the Mornington Peninsula. The George Hicks Foundation&#39;s inaugural Mornington Peninsula Philanthropic Summit last month was attended by community service providers, local government, businesses and philanthropic organisations, and was facilitated pro-bono by Right Lane Consulting. The summit formulated a long-term vision for the peninsula that would see more emergency accommodation for families, a youth hub, mental health support for young people, and greater coordination between young people and community service providers. The summit also looked at how place-based funding could address community needs, and presented findings from the Regional Statistical Profile - Mornington Peninsula, 2011 to

2015 report commissioned from the National Institute of Economic and Industry Research (NIEIR). Participants looked at how the needs of young people living on the peninsula might be addressed through coordination of community organisations, philanthropic funders, business and local government. The three most critical regional issues were lack of public transport, lack of affordable housing and access to quality pre-school services. Solutions in response included greater coordination of services and long-term, coordinated funding, greater access to early childhood services, community hubs, holistic case management for households under stress, a youth hub and emergency accommodation, and “tech-enabled” and community-driven transport systems outside public transport.