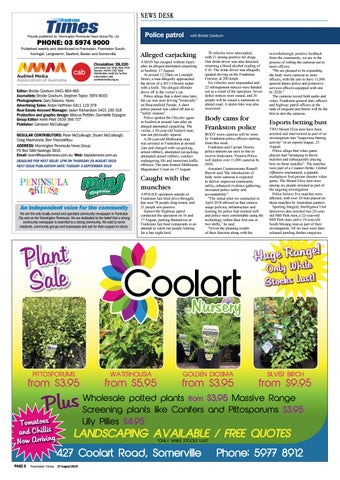 Alleged carjacking A MAN has escaped without injury after an alleged attempted carjacking in Seaford, 17 August. At around 12.20am on Lonsdale Street, a man allegedly approached the driver of a 2013 Chrisler sedan with a knife. The alleged offender drove off in the victim’s car. Police allege that a short time later, the car was seen driving “erratically” on Beaconsfield Parade. A short police pursuit was called off due to “safety reasons”. Police spotted the Chrysler again in Seaford at around 1am after an alleged attempted carjacking. The victim, a 30-year-old Seaford man, was not physically injured. A 28-year-old Melbourne man was arrested in Frankston at around 2am and charged with car-jacking, armed robbery, attempted car-jacking, attempted armed robbery, conduct endangering life and numerous traffic offences. The man fronted Melbourne Magistrates’ Court on 17 August.

Caught with the munchies An independent voice for the community

A POLICE operation outside of Frankston fast food drive-throughs has seen 78 people drug tested, and 21 people test positive. Somerville Highway patrol conducted the operation on 16 and 17 August, parking themselves at Frankston fast food restaurants in an attempt to catch out people looking for a late night feed.

78 vehicles were intercepted, with 21 testing positive for drugs. One drink driver was also detected, returning a blood alcohol reading of 0.16. The drink driver was allegedly spotted driving on the Frankston Freeway at 200 kmph. Six vehicles were impounded and 22 infringement notices were handed out as a result of the operation. Seven defect notices were issued, and 26 people will be issued a summons to attend court. A stolen bike was also recovered.

BODY worn cameras will be worn by Frankston police officers starting from this week. Frankston and Carrum Downs police stations are next in line to receive bodycams. Victoria Police will deploy over 11,000 cameras by 2020. Assistant Commissioner Russell Barrett said “the introduction of body worn cameras is expected to deliver improved community safety, enhanced evidence gathering, increased police safety and accountability”. “The initial pilot we conducted in April 2018 showed us that camera usage policies, infrastructure and training for police had worked well and police were comfortable using the technology within their first one or two shifts,” he said. “Given the pleasing results of their function along with the

overwhelmingly positive feedback from the community, we are in the process of rolling the cameras out to more officers. “We are pleased to be expanding the body worn cameras to more officers, with the aim to have 11,000 general duties police and protective services officers equipped with one by 2020.” The cameras record both audio and video. Frankston general duty officers and highway patrol officers at the rank of sergeant and below will be the first to don the cameras.

TWO Mount Eliza men have been arrested and interviewed as part of an investigation into “suspicious betting activity” in an esports league, 23 August. Police allege that video game players had “arranging to throw matches and subsequently placing bets on those matches”. The matches were part of a Counter-Strike: Global Offensive tournament, a popular multiplayer first-person shooter video game. The Mount Eliza men were among six people arrested as part of the ongoing investigation. Police believe five matches were affected, with over 20 bets placed on those matches by Australian punters. Sporting Integrity Intelligence Unit detectives also arrested two 20-yearold Mill Park men, a 22-year-old Mill Park man, and a 19-year-old South Morang man as part of their investigation. All six men were later released pending further enquiries.