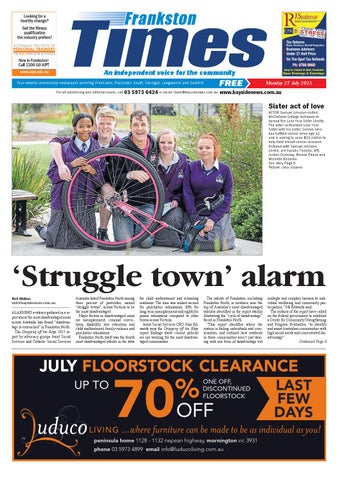 An independent voice for the community Your weekly community newspaper covering Frankston, Frankston South, Karingal, Langwarrin and Seaford For all advertising and editorial needs, call 03

‘Struggle town’ alarm Neil Walker neil@baysidenews.com.au ALARMING evidence gathered in a report about the most disadvantaged areas across Australia has found “disadvantage is entrenched” in Frankston North. The Dropping off the Edge 2015 report by advocacy groups Jesuit Social Services and Catholic Social Services

for child maltreatment and schooling readiness. The area was ranked second for psychiatric admissions, fifth for long-term unemployment and eighth for prison admissions compared to other towns across Victoria. Jesuit Social Services CEO Julie Edwards says the Dropping off the Edge report findings show current policies are not working for the most disadvantaged communities.

multiple and complex barriers to individual wellbeing and community participation,” Ms Edwards said. The authors of the report have called on the federal government to establish a Centre for Community Strengthening and Program Evaluation “to identify and assist Australian communities with high social needs and concentrated disadvantage”. Continued Page 8

JULY FLOORSTOCK CLEARANCE UP TO

...where furniture can be made to be as individual as you!