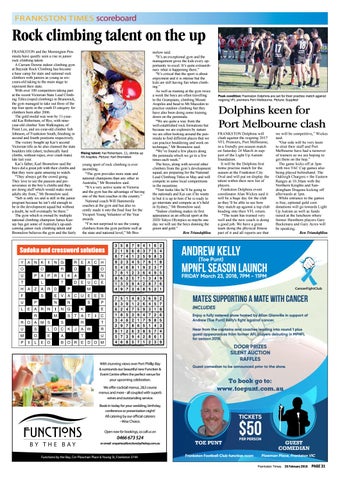 Rock climbing talent on the up FRANKSTON and the Mornington Peninsula have quietly seen a rise in junior rock climbing talent. A Carrum Downs indoor climbing gym at Bayside Rock Climbing has become a base camp for state and national rock climbers with juniors as young as sixyears-old taking to the main stage to represent their state. With over 100 competitors taking part at the recent Victorian State Lead Climbing Titles (roped climbing) in Brunswick, the gym managed to take out three of the top four spots in the youth D category for climbers born after 2006. The gold medal was won by 11-yearold Kai Robertson, of Rye, with nineyear-old climber Tom Walkington, of Point Leo, and six-year-old climber Seb Johnson, of Frankston South, finishing in second and fourth positions respectively. The victory bought up Kai’s second Victorian title as he also claimed the state boulders title (short, technically hard climbs, without ropes, over crash mats) late last year. Kai’s father, Karl Bromelow said the boys did a great job with their climbs and that they were quite amazing to watch. “They always get the crowd going. They love to see the passion and perseverance in the boy’s climbs and they are doing stuff which would make most adults shy from,” Mr Bromelow said. “Seb is only six and is still in the junior program because he isn’t old enough to be in the development squad but without a doubt, he will eventually be there.” The gym which is owned by multiple national climbing champion James Kassay has got some of Australia’s up-andcoming junior rock climbing talent and Bromelow believes the gym and the fairly

young sport of rock climbing is ever ascending. “The gym provides more state and national champions than any other in Australia,” Mr Bromelow said. “It’s a very active scene in Victoria and the gym has the advantage of having one of the best coaches in the country.” National coach Will Hammersla coaches at the gym and has also recently made it into the final four for the Vicsport Young Volunteer of the Year awards. “I’m not surprised to see the young climbers from the gym perform well at the state and national level,” Mr Bro-

melow said. “It’s an exceptional gym and the management gives the kids every opportunity to excel. It’s quite extraordinary what is happening there.” “It’s critical that the sport is about enjoyment and it is intense but the kids are still having fun when climbing.” As well as training at the gym twice a week the boys are often travelling to the Grampians, climbing Mount Arapiles and head to Mt Macedon to practice outdoor climbing but they have also been doing some training down on the peninsula. “We are quite a way from the well-established rock formations but because we are explorers by nature we are often looking around the peninsula to find different places that we can practice bouldering and work on technique,” Mr Bromelow said. “We’ve found a few places along the peninsula which we go to a few times each week.” The boys, along with several other climbers from the gym’s development squad, are preparing for the National Lead Climbing Titles in May and will compete in some local competitions in the meantime. “Tom looks like he’ll be going to the nationals and Kai can if he wants to but it is up to him if he is ready to go interstate and compete as it’s held in Sydney,” Mr Bromelow said. “Indoor climbing makes its first appearance as an official sport at the 2020 Tokyo Olympics so maybe one day we will see the boys donning the green and gold.” Ben Triandafillou

Dolphins keen for Port Melbourne clash FRANKSTON Dolphins will clash against the reigning 2017 VFL Premiers, Port Melbourne, in a friendly pre-season match on Saturday 24 March in support of the Light Up Autism foundation. It will be the Dolphins first home practise match for the season at the Frankston City Oval and will put on display the talent within their new list of players. Frankston Dolphins event coordinator Alan Wickes said it will be a huge day for the club as they’ll be able to see how they match up against a top club heading into their VFL return. “The team has trained very well and the new coach is doing a good job. We have a great team doing the physical fitness part of it and all reports are that

we will be competitive,” Wickes said. “Our side will be very keen to strut their stuff and Port Melbourne have had a turnover of trainers so we are hoping to get them on the hop.” The game kicks off at 3pm with two TAC Cup games also being played beforehand. The Oakleigh Chargers v the Eastern Ranges at 10.30am with the Northern Knights and Sandringham Dragons kicking off afterwards at 1pm. While entrance to the games is free, optional gold coin donations will go towards Light Up Autism as well as funds raised at the luncheon where former Hawthorn players Gary Buckenara and Gary Ayres will be speaking. Ben Triandafillou

MATES SUPPORTING a mate with cancer INCLUDES Enjoy a fully catered show hosted by Allan Glanville in support of Andrew (Toe Punt) Kelly’s fight against cancer. Hear from the captains and coaches leading into round 1 plus guest appearances from former AFL players debuting in MPNFL for season 2018.

DOOR PRIZES SILENT AUCTION RAFFLES Guest comedian to be announced prior to the show.

To book go to: www.toepunt.com.au

Book in today for your wedding, birthday, conference or presentation night! All catering by our official caterers - Wise Choice.

Open now for bookings, so call us on