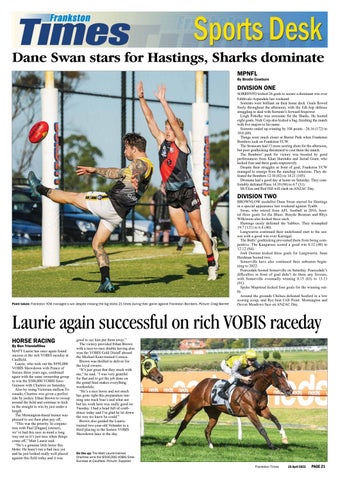 SORRENTO kicked 26 goals to secure a dominant win over Edithvale-Aspendale last weekend. Sorrento were brilliant on their home deck. Goals flowed freely throughout the afternoon, with the Edi-Asp defence struggling to deal with Sorrento’s forward firepower. Leigh Poholke was awesome for the Sharks. He booted eight goals. Nick Corp also kicked a bag, finishing the match with five majors to his name. Sorrento ended up winning by 104 points - 26.16 (172) to 10.8 (68). Things were much closer at Baxter Park when Frankston Bombers took on Frankston YCW. The Stonecats had 13 more scoring shots for the afternoon, but poor goalkicking threatened to cost them the match. The Bombers’ push for victory was boosted by good performances from Khan Haretuku and Jarrad Grant, who kicked four and three goals respectively. Despite their struggles in front of goal, Frankston YCW managed to emerge from the matchup victorious. They defeated the Bombers 12.10 (82) to 14.21 (105). Dromana had a good day at home on Saturday. They comfortably defeated Pines 14.10 (94) to 4.7 (31). Mt Eliza and Red Hill will clash on ANZAC Day.

BROWNLOW medallist Dane Swan starred for Hastings in a special appearance last weekend against Tyabb. Swan, who retired from AFL football in 2016, booted three goals for the Blues. Brayde Bosman and Rhys Wilkinson also kicked three each. Hastings easily defeated the Yabbies. They triumphed 19.7 (121) to 6.4 (40). Langwarrin continued their undefeated start to the season with a good win over Karingal. The Bulls’ goalkicking prevented them from being competitive. The Kangaroos scored a good win 6.12 (48) to 12.12 (84). Josh Dormer kicked three goals for Langwarrin. Sean Herdman booted two. Somerville have also continued their unbeaten beginning to 2022. Pearcedale hosted Somerville on Saturday. Pearcedale’s difficulties in front of goal didn’t do them any favours, with Somerville eventually winning 8.15 (63) to 13.13 (91). Spyke Mepstead kicked four goals for the winning outfit. Around the grounds Chelsea defeated Seaford in a low scoring scrap, and Rye beat Crib Point. Mornington and Devon Meadows face on ANZAC Day.

By Ben Triandafillou MATT Laurie has once again found success at the rich VOBIS raceday at Caulfield. Laurie, who took out the $950,000 VOBIS Showdown with Prince of Sussex three years ago, combined again with the same ownership group to win the $500,000 VOBIS Sires Guineas with Chartres on Saturday. Also by rising Victorian stallion Toronado, Chartres was given a perfect ride by jockey Ethan Brown to swoop around the field and continue to kick in the straight to win by just under a length. The Mornington-based trainer was pleased to see their plan pay off. “This was the priority. In conjunction with Paul [Dugan] (owner), we’ve had this race in mind a long way out so it’s just nice when things come off,” Matt Laurie said. “He’s a genuine little horse this bloke. He hasn’t run a bad race yet and he just looked really well placed against this field today and it was

good to see him put them away.” The victory provided Ethan Brown with a race-to-race double having also won the VOBIS Gold Distaff aboard the Michael Kent-trained Comica. Brown was thrilled to deliver for the loyal owners. “It’s just great that they stuck with me,” he said. “I was very grateful for that and to get the job done on the grand final makes everything worthwhile. “He’s a nice horse and not much has gone right this preparation running into track bias’s and what not but his work here was really good on Tuesday. I had a head full of confidence today and I’m glad he let down the way we knew he could.” Brown also guided the Laurietrained two-year-old Volander to a third placing in the feature VOBIS Showdown later in the day.

On the up: The Matt Laurie-trained Chartres wins the $500,000 VOBIS Sires Guineas at Caulfield. Picture: Supplied Frankston Times