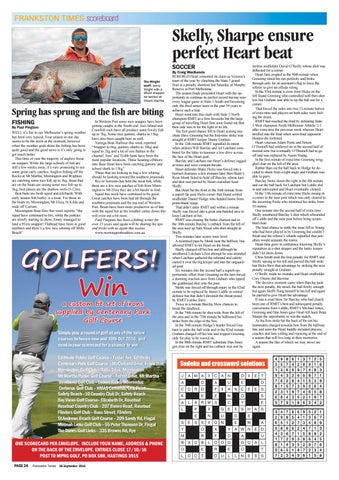 Spring has sprung and the fish are biting FISHING

By Paul Pingiaro WELL it’s fair to say Melbourne’s spring weather has been very typical. Four season in one day seems to be the norm at the moment, however when the weather gods shine the fishing has been quite good and the good news is it’s only going to get much better. This time of year the majority of anglers focus on snapper. While the large schools of fish are still a few weeks away, it’s very promising to see some great early catches. Anglers fishing off the Rocks at Mt Martha, Mornington and Brighton are catching some nice fish up to 3kg, those that are on the boats are seeing some nice fish up to 5kg, best places are the shallow reefs (5-12m). Best baits are fresh squid and pilchards. With early season fish burley is a must. For those in the boats try Mornington, Mt Eliza, St Kilda and wide off Carrum. Mornington Boat Hire this week reports: “the squid have continued to fire, while the pinkies are slowly starting to show, Jonny managed to land a 95cm snapper! Flathead have been in good numbers and there’s a few nice whiting off Mills Beach”

In Western Port some nice snapper have been getting caught in the North end. Joes Island and Crawfish rock have all produce some lovely fish up to 7kg. Some nice gummy sharks to 15kg have also been caught here as well. Yaringa Boat Harbour this week reported “Snapper to 6kg, gummy sharks to 10kg and squid to 2kg and a lot of size flatties in the channel. Joes’ and Tyabb bank have been the most popular locations. Those heading offshore into Bass Strait have been catching gummy and school shark to 15kg” Those that are looking to bag a few whiting should be looking toward the southern peninsula. Rye to Sorrento has held the most fish, while there are a few nice patches of fish from Mornington to Mt Eliza they are a bit harder to find. Squid this week have continued to be good. Great catches have been had all through the southern peninsula and the top end of Western Port. Boats have been more productive as of late with the squid but as the weather calms down this will even out a bit more. Paul Pingiaro has been a fishing writer for over 15 years and again will be sharing his tips and tricks with us again this season www.morningtonboathire.com.au

By Craig MacKenzie ROSEBUD Heart cemented its claim as Victoria’s team of the year by clinching the State 5 grand final in a penalty shootout last Saturday at Murphy Reserve in Port Melbourne. The season finale presented Heart with the opportunity to continue its perfect record having won every league game in State 5 South and becoming only the third senior team in the past 54 years to achieve such a feat. Heart went into this clash with State 5 North champion RMIT as a firm favourite but the large group of travelling Heart fans soon found out that their side was in for the fight of its life. The first good chance fell to Heart scoring machine Dave Greening but his first-time strike was straight at RMIT keeper Danny Graham. In the 12th minute RMIT signalled its intent when strikers Will Barclay and Jol Latcham combined for the latter to hammer a low drive across the face of the Heart goal. Barclay and Latcham ran Heart’s defence ragged at times and were constant threats. Heart defender Blake Hicks was forced into a hurried clearance a few minutes later then Heart’s Ryan Monk failed to hold off Barclay whose turn and shot was parried by Heart custodian Sean Skelly. But Heart hit the front in the 26th minute from a superb far post Hicks corner that found central midfielder Daniel Hodge who headed home from point-blank range. That didn’t deter RMIT and within a minute Skelly was forced into a great one-handed save to keep Latcham at bay. RMIT was creating the better chances and in the 36th minute Barclay’s cutback from the left of the area teed up Sam Wood who shot straight at Skelly. Two minutes later scores were level. A mistimed pass by Monk near the halfway line allowed RMIT to hit Heart on the break. Skelly charged off his line and although he smothered Latcham’s first attempt he was stranded when Latcham gathered the rebound and calmly curled it over the big keeper and into the unguarded goal. Six minutes into the second half a superb opportunistic effort from Greening on the turn forced a stunning reaction save from Graham who tipped the goalbound shot onto the post. Monk was forced off through injury in the 62nd minute to be replaced by James Liddle in central defence but that didn’t diminish the threat posed by RMIT’s strike force. Twice in a minute Barclay blew chances to break the deadlock. In the 74th minute he shot wide from the left of the area and in the 75th minute he ballooned his strike from the edge of the box. In the 76th minute Hodge’s header forced Graham to palm the ball wide and in the 82nd minute Graham charged off his line and tripped Greening only for play to be waved on. In the 88th minute RMIT substitute Dan Jones got clear on the right and his cutback was met by

tireless midfielder David O’Reilly whose shot was deflected for a corner. Heart fans erupted in the 90th minute when Greening timed his run perfectly and broke through only for an assistant’s flag to force the referee to give an offside ruling. In the 93rd minute a cross from Hicks on the left found Greening who controlled well then shot low but Graham was able to tip the ball out for a corner. That forced the sides into two 15-minute halves of extra time and players on both sides were feeling the strain. RMIT had reached the final by defeating State 5 West champion North Melbourne Athletic 2-1 after extra time the previous week whereas Heart strolled into the final when semi-final opponent Healesville forfeited. Heart veterans Adam Poole and Simon O’Donnell had soldiered on in the second half of normal time but eventually O’Donnell had to go off and was replaced by Aaron Young. In the first minute of extra time Greening wriggled clear on the left of the area. Rather than cut the ball back to Hodge he decided to shoot from a tight angle and Graham was able to parry. Barclay broke down the right in the 4th minute and cut the ball back for Latcham but Liddle slid in and intercepted and Heart eventually cleared. In the 11th minute of extra time Hicks swung in a corner to the near post which was only cleared to the incoming Poole who mistimed his strike from 10 metres. One minute into the second half of extra time Skelly smothered Barclay’s shot which rebounded off Liddle and the near post before being scrambled clear. The final chance to settle the issue fell to Young who had been played in by Greening but couldn’t finish and the referee’s whistle signalled that penalties would separate the teams. Heart fans grew in confidence knowing Skelly’s reputation as a shot stopper and the lanky keeper didn’t let them down. Chris Smith took the first penalty for RMIT and Skelly sprung to his left and parried the ball wide but Hicks blew that advantage by striking the next penalty straight at Graham. O’Reilly made no mistake and Heart midfielder Cory Osorio did likewise. The decisive moment came when Barclay took the next penalty. He struck the ball firmly enough but again Skelly flung himself to his left and again he parried to give Heart the advantage. It was a cruel blow for Barclay who had clearly been one of RMIT’s best and subsequent penalty conversions from Liddle, RMIT’s Michael Jones, Greening and Dan Jones gave Heart left back Beau Sharpe the opportunity to win the match. As his firm strike hit the back of the net his teammates charged towards him from the halfway line and soon the Heart huddle included players, coaches and fans yelling and rejoicing at the end of a season that will live long in their memories. A season the like of which we may never see again.