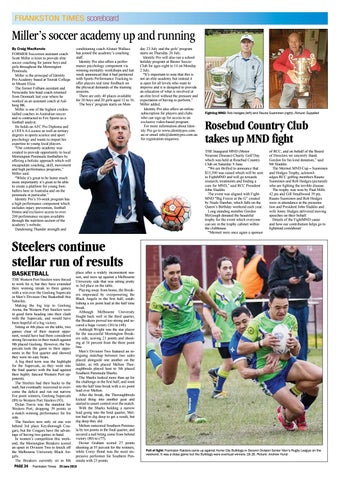 Miller’s soccer academy up and running By Craig MacKenzie FORMER Socceroos assistant coach Scott Miller is keen to provide elite soccer coaching for junior boys and girls throughout the Mornington Peninsula. Miller is the principal of Identity Pro Academy based at Toorak College in Mount Eliza. The former Fulham assistant and Newcastle Jets head coach returned from Denmark last year where he worked as an assistant coach at Aalborg BK. Miller is one of the highest credentialled coaches in Australian soccer and is contracted to Fox Sports as a football analyst. He holds an AFC Pro Diploma and a UEFA A-Licence as well as tertiary degrees in sports science and sport psychology and wants to impart his expertise to young local players. “Our community academy was created to provide opportunity to local Mornington Peninsula footballers by offering a holistic approach which will encapsulate coaching, skill, movement and high performance programs,” Miller said. “While it’s great to be home much more importantly it’s great to be able to create a platform for young footballers here in Australia and on the peninsula in particular.” Identity Pro’s 10-week program has a high performance component which includes injury prevention, football fitness and exclusive access to over 200 performance recipes available through the nutrition section of the academy’s website. Dandenong Thunder strength and

conditioning coach Alistair Wallace has joined the academy’s coaching staff. Identity Pro also offers a performance psychology component via winning mentality workshops and last week announced that it had partnered with Sports Performance Tracking to offer players real time feedback on the physical demands of the training sessions. There are only 40 places available for 20 boys and 20 girls aged 12 to 16. The boys’ program starts on Mon-

day 23 July and the girls’ program starts on Thursday 26 July. Identity Pro will also run a school holiday program at Baxter Soccer Club for ages eight to 14 on Monday 2 July. “It’s important to note that this is not an elite academy but instead it is open for all levels who want to improve and it is designed to provide an education of what is involved at an elite level without the pressure and expectation of having to perform,” Miller added. Identity Pro also offers an online subscription for players and clubs who can sign up for access to an exclusive video-based program. For more information about Identity Pro go to www.identitypro.com. au or email info@identitypro.com.au for registration enquiries.

Rosebud Country Club takes up MND fight THE Inaugural MND (Motor Neurone Disease) Charity Golf Day which was held at Rosebud Country Club on Saturday 9 June. “We are thrilled to announce that $15,500 was raised which will be sent to FightMND and will go towards research, treatments and finding a cure for MND,” said RCC President John Sladdin. The event was aligned with FightMND “Big Freeze at the G” created by Neale Daniher, which falls on the Queen’s Birthday weekend each year. Long standing member Gordon McGough donated the beautiful trophy for the event which everyone can see in the trophy cabinet within the clubhouse. “Mermet were once again a sponsor

of RCC, and on behalf of the Board of Directors we sincerely thank Gordon for his kind donation,” said Mr Sladdin. The Mermet MND Cup – Suominen and Hodges Trophy, acknowledges RCC golfing members Rauno Suominen and Rob Hodges (pictured) who are fighting the terrible disease. The trophy was won by Paul Mills 42 pts and Gill Smallwood 39 pts. Rauno Suominen and Rob Hodges were in attendance at the presentation and President John Sladdin and wife Jenny Hodges delivered moving speeches on their behalf. Details of the FightMND cause and how our contribution helps go to fightmnd.com/about/

THE Western Port Steelers were forced to work for it, but they have extended their winning streak to three games with a win over the Geelong Supercats in Men’s Division One Basketball this Saturday. Making the big trip to Geelong Arena, the Western Port Steelers were in good form heading into their clash with the Supercats, and would have been hopeful of a big victory. Sitting in 4th place on the table, two games clear of their nearest opponent, would have had them considered strong favourites in their match against 9th placed Geelong. However, the Supercats took the game to their opponents in the first quarter and showed they were no easy beats. A big third term was the highlight for the Supercats, as they went into the final quarter with the lead against their highly fancied Western Port opponents. The Steelers had their backs to the wall, but eventually recovered to overcome the deficit and run out narrow five point winners, Geelong Supercats (89) to Western Port Steelers (95). Dylan Travis was the standout for Western Port, dropping 39 points in a match winning performance for his side. The Steelers now only sit one win behind 3rd place Keysborough Cougars, but the Cougars have the advantage of having two games in hand. In women’s competition this weekend, the Mornington Breakers scored an upset in Division Two to knock off the Melbourne University Black Angels. The Breakers currently sit in 8th

place after a widely inconsistent season, and were up against a Melbourne University side that was sitting pretty in 3rd place on the table. Playing away from home, the Breakers impressed by overpowering the Black Angels in the first half, establishing a six point lead at the half time break. Although Melbourne University fought back well in the third quarter, the Breakers proved too strong and secured a huge victory (36) to (48). Ashleigh Wright was the star player for the successful Mornington Breakers side, scoring 21 points and shooting at 54 percent from the three point line. Men’s Division Two featured an intriguing matchup between two sides placed alongside one another on the ladder, as 6th placed Melton Thoroughbreds played host to 5th placed Southern Peninsula Sharks. The Sharks looked more than up for the challenge in the first half, and went into the half time break with a six point lead over Melton. After the break, the Thoroughbreds kicked thing into another gear and started to assert control over the match. With the Sharks holding a narrow lead going into the final quarter, Melton had to dig deep to get a result, but dig deep they did. Melton outscored Southern Peninsula by ten points in the final quarter, and secured a nail biting come from behind victory (80) to (77). Dexter Graham scored 27 points shooting at 55 percent for the winners, while Corey Bond was the most impressive performer for Southern Peninsula with 23 points.

Full of fight: Frankston Raiders came up against Hume City Bulldogs in Second Division Senior Men’s Rugby League on the weekend. It was a close game but the Bulldogs were eventual winners 18-16. Picture: Andrew Hurst