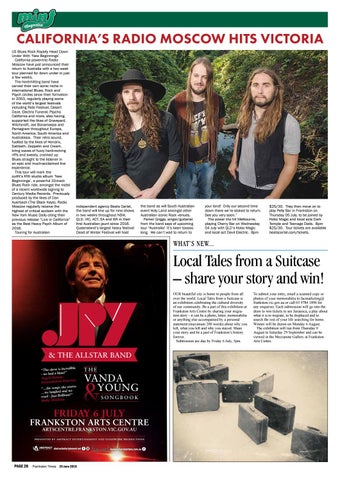 CALIFORNIA’S RADIO MOSCOW HITS VICTORIA US Blues Rock Royalty Head Down Under With ‘New Beginnings’ California power-trio Radio Moscow have just announced their return to Australia with a two week tour planned for down under in just a few weeks. The hard-hitting band have carved their own sonic niche in international Blues, Rock and Psych circles since their formation in 2003, regularly playing some of the world’s largest festivals including Ride Festival, Desert Daze, Electric Funeral, Psycho California and more, also having supported the likes of Graveyard, Witchcraft, Joe Bonamassa and Pentagram throughout Europe, North America, South America and Australasia. Their retro sound, fuelled by the likes of Hendrix, Sabbath, Zeppelin and Cream, bring waves of fuzzy hard-rocking riffs and sweaty, cranked up Blues straight to the listener in an epic and much-acclaimed live experience. This tour will mark the outfit’s fifth studio album ‘New Beginnings’, a powerful 10-track Blues Rock ride, amongst the midst of a recent worldwide signing to Century Media Records. Previously produced by the likes of Dan Auerbach (The Black Keys), Radio Moscow regularly receive the highest of critical acclaim with the New York Music Daily citing their previous release “Live in California” as the Best Heavy Psych Album of 2016. Touring for Australian

independent agency Beats Cartel, the band will line up for nine shows in two weeks throughout NSW, QLD, VIC, ACT, SA and WA in their first Australian jaunt since 2016. Queensland’s largest heavy festival Dead of Winter Festival will host

the band as will South Australian event Holy Land amongst other Australian iconic Rock venues. Parker Griggs, singer/guitarist from the band says of upcoming tour “Australia! It’s been tooooo long. We can’t wait to return to

$25/30. They then move on to play Pelly Bar in Frankston on Thursday 05 July, to be joined by Hobo Magic and local acts Dark Temple and Teenage Dads. 8pm $25/30. Tour tickets are available beatscartel.com/tickets.

Local Tales from a Suitcase – share your story and win! OUR beautiful city is home to people from all over the world. Local Tales from a Suitcase is an exhibition celebrating the cultural diversity of our community. Be a part of this exhibition at Frankston Arts Centre by sharing your migration story - it can be a photo, letter, memorabilia or anything else accompanied by a personal statement (maximum 200 words) about why you left, what you left and why you stayed. Share your story and be a part of Frankston’s history forever. Submission are due by Friday 6 July, 5pm.

&amp; THE ALLSTAR BAND redible “The show is inc - we had a blast!” Angela Bishop porter. Entertainment Re stories “…the songs, the we d an …we laughed t!” an illi Br st Ju ed cri m. ru eld Molly M

To submit your entry, email a scanned copy or photos of your memorabilia to facmarketing@ frankston.vic.gov.au or call 03 9784 1896 for any enquiries. Each submission will go into the draw to win tickets to see Jurassica, a play about what it is to migrate, to be displaced and to search the rest of your life searching for home. Winner will be drawn on Monday 6 August. The exhibition will run from Thursday 9 August to Saturday 29 September and can be viewed in the Mezzanine Gallery at Frankston Arts Centre.